You are at:Home»Industry»The Art of Delivery 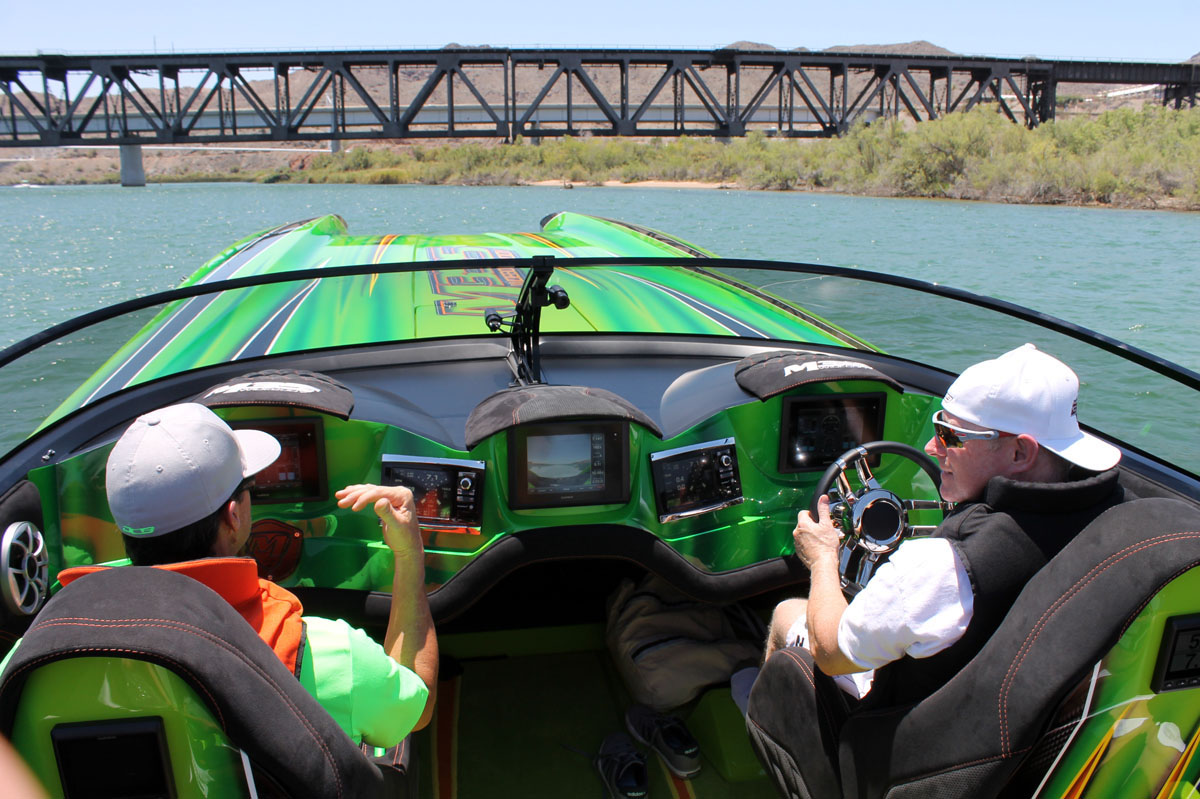 DCB’s Tony Chiaramonte gave some driving advice to JP O’Donoghue before he took the wheel of his new M35 Widebody, Lickity Split, for the first time earlier this week.

DCB Performance Boats isn’t the only boat builder in this industry that spends time with its customers upon delivery of a new boat, but after getting to experience the process firsthand on Tuesday, one would be hard-pressed to find another company that does it quite like DCB thanks to the dedicated efforts of longtime employee Tony Chiaramonte.

Chiaramonte, who started with the El Cajon, Calif., builder in 1993 and worked at Eliminator Boats for several years before returning to DCB in 2009, delivered the latest M35 Widebody to first-time DCB customer JP O’Donoghue earlier this week (read the speedonthewater.com story). And for almost two days in Lake Havasu City, Ariz.—the city Chiaramonte visits the most often for deliveries—he walked O’Donoghue and his best friend Brad Klopefer through arguably the most elaborate DCB build in the company’s 25-year history. 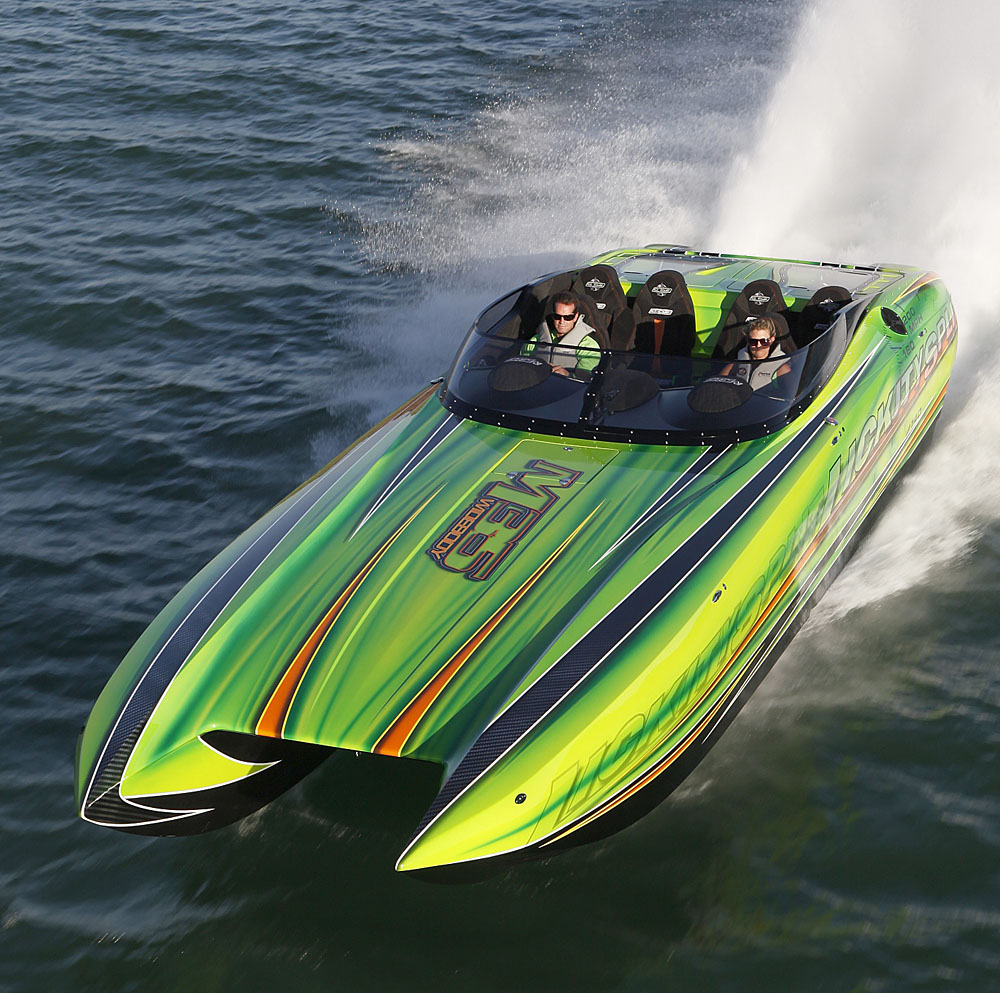 Chiaramonte’s goal was to make sure O’Donoghue felt comfortable in Lickity Split, his twin Mercury Racing 1350-powered catamaran capable of 165 mph, and that he was more than pleased with the product he spent hundreds of thousands of dollars to have built.

“It doesn’t matter if you have a Mach F26 or an M41 Widebody, every customer gets the same treatment,” said Chiaramonte, who was quick to thank his wife, Amy, and their three kids for being so supportive when it comes to his crazy schedule. “I pretty much go through the same process every time we deliver a boat. I try to go above and beyond the call of duty, but that’s just how I am and it’s the same for the entire company from the people laying up and rigging the boats to the ones selling them.

“With the teaching that I do, especially when I’m in a boat that goes as fast as JP’s and am putting my life into someone’s hands who I don’t know too well, my job is to take the time necessary to make sure the owner is as safe, responsible and knowledgeable as possible,” he continued. “I show the customer everything I can and answer every question they have—and there’s never a stupid question, trust me.”

Chiaramonte usually spends a couple of hours with the owner in the boat before it even leaves the trailer showing them everything from where the battery switches and breakers are located to how to work the GPS system and SmartCraft displays. After that, he puts the boat in the water and makes sure the customer understands what he’s doing every step of the way. He also has him repeat the process so he’ll be comfortable doing it once he’s on his own.

“I make sure they understand how to launch, dock and retrieve the boat,” Chiaramonte said. “Then I have them start it up, jump in the engine compartment with me and make sure there’s water in the strainers, that the hoses and belts look good, and that there aren’t any noticeable leaks. I make sure they understand they need to go over everything each time they take the boat out. From there we drive it and get more hands on in terms of coming on plane, turning the boat, understanding trim sensitivity and much more.”

Along for the ride it was cool to see Chiaramonte, who I’ve know for 10 years, doing what he does best. It also was interesting to get the customer’s take on Chiaramonte, who has become close friends with several DCB owners he’s delivered boats to, including Charlie Brown, Win Farnsworth, Jake Nossaman and Javier Raisch. Both O’Donoghue and Klopefer commented on the way to the launch ramp that they wouldn’t want Chiaramonte’s job because of the responsibility he takes on driving and hauling around boats that cost a half-million dollars or more. 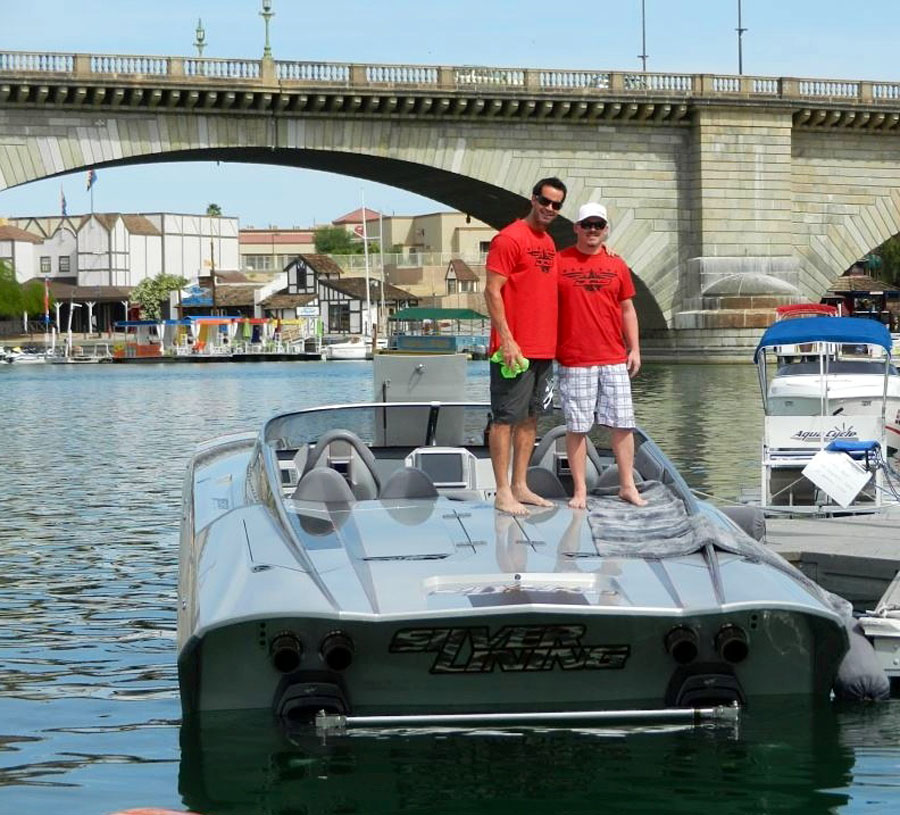 Win Farnsworth, owner of DCB’s first M41 Widebody, has become good friends with Chiaramonte over the past two years.

One thing’s for sure, the two friends shared the utmost respect for Chiaramonte and everyone at DCB for that matter. They were utterly satisfied with the attention to detail when it came to the finished product as well as the delivery process. They also picked up a new friend and potential houseguest as Chiaramonte left with a key to O’Donoghue’s guesthouse that he can use anytime he’s in town.

“You wouldn’t believe the relationships I’ve built with our customers over the years,” said Chiaramonte, who has delivered boats to many spots in the country as well as Canada. “I mean these guys care about me—they always ask about my wife and kids. This isn’t a ‘deliver the boat and we’re done’ kind of thing. I answer all of their phone calls, provide mechanical and/or driving advice when possible and will come run the boats with them at an event if they ask.”

Some people would say he has a dream job, and while Chiaramonte wouldn’t want to be doing anything else, the job is not as glamorous as one might think. He’s not just the guy running the boat, he’s the one cleaning it, filling it with gas and inspecting everything in and out of the boat and its trailer. Oh yeah, and he’s usually the one the customer calls first if anything goes wrong.