You are at:Home»Industry»The Boomerang Effect 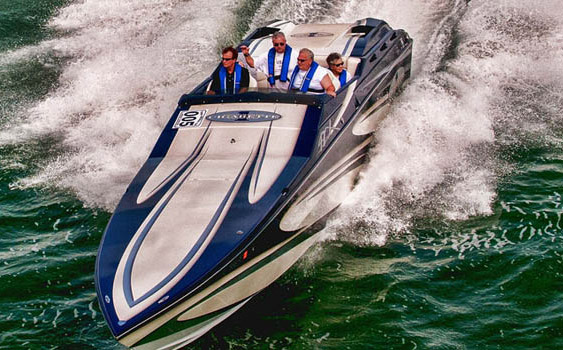 Back in New Jersey after last weekend’s Miami Boat Show Poker Run to Islamorada, Fla., Bob Christie, a well-known figure on the poker run scene, couldn’t be happier with how it all went. Christie and company ran from Miami to the run’s final destination—with a scheduled lunch stop at Gilbert’s in Key Largo—without incident in his new (to him at least) Cigarette 42 X V-bottom powered by twin Mercury Racing 1100 engines.

But wait, you’re thinking, doesn’t Christie own a wicked-cool custom 38-foot Statement center console, the first one with quad 300-hp Mercury Verado outboards, which he bought to replace his well-known 44-foot Speed Racer Marine Technology, Inc. catamaran last year? A little more than a month ago, before he moved out of the 38-footer and into the Cigarette courtesy of Randy Sweers of Fast Boats Marine Group, you’d have been right.

So why the switch from the center console to yet another pure go-fast boat?

“The entire process went like this: Speed Racer was high-maintenance—moving it, trailering it, maintaining it, the whole thing was a lot of work,” Christie explained. “Plus, there was the issue that the family wanted to be on the boat, and it only had six seats. Everybody was talking about center consoles, so we built the 38 Statement and put quads on it and it could handle a bunch of people. But what we found was that while the center console was fine with everyone on board at 40 to 50 mph, it wasn’t any fun at all at 75 to 80 mph in a poker run with everyone trying not to get blown out of the boat and trying not to get the heck beaten out of them.

“So I decided I wanted something I could cruise in at 40 to 50 mph, put the family in and head out for dinner or a casual day on the water, or run at 100 mph in a poker run and still be comfortable. That’s why I bought the Cigarette.” 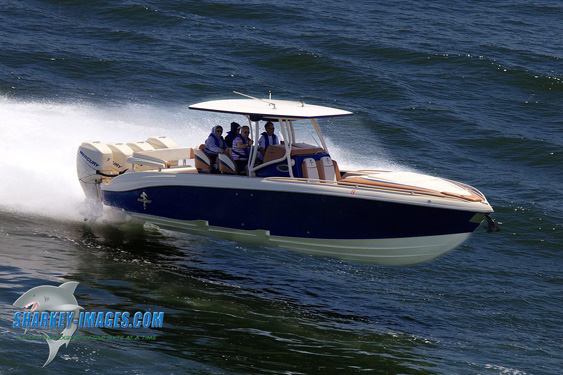 While it would be premature to label the return of current performance-oriented center console owners to their pure go-fast boat roots a “comeback,” it is a slowly growing trend that more than a few folks in the industry say they’re seeing. And not all of those owners are choosing one kind of boat over the other.

“I am seeing my go-fast guys now running center consoles and go-fast boats,” said Joe Schaldenbrand, the co-power of Sunsation Powerboats in Algonac, Mich. “Like Craig Mytelka—he got rid of his 43-foot V-bottom and got one of our new 36 center consoles, and now he’s ordered a new go-fast V-bottom. I see a lot of ours guys keeping both.

“I actually think the kind of center consoles Sunsation, Nor-Tech and other performance boat companies are building should be called ‘sport consoles,’” he added. “They drive like sportboats, not fishboats, and I think that’s part of the reason why people who can afford to are keeping both.” 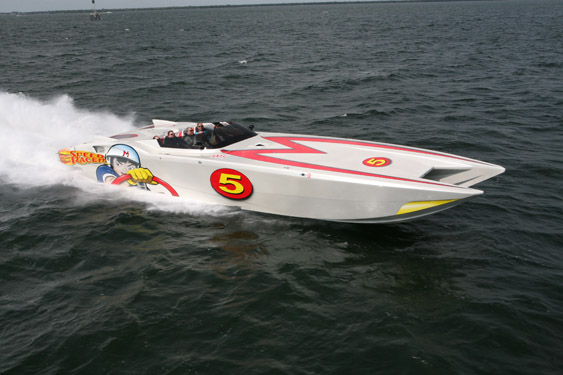 To Speed Racer, the well-known 44-foot MTI cat Christie sold before he bought the Statement.

Mark Fischer, the owner of Boats Direct USA, a Deep Impact and Statement Marine dealer in Key Largo, Fla., said he’s observing the same trend—owners who got out of a traditional go-fast boats in favor of center consoles getting back into go-fast models, and keeping both boats.

“It’s the best of both worlds, isn’t it?” said Fischer, who has ordered a 52-foot Nor-Tech V-bottom to complement his current center console ride, a 39-foot Deep Impact Poker Run Edition. “In the last six years with the downturn in the economy, a lot of people moved to center consoles because they are more cost-effective to own. But I believe 100 percent that the go-fast powerboat market is coming back, and if people can afford to own both boats they will. We’re definitely seeing a lot of new [high-performance] powerboats coming back on the scene that we haven’t seen in years.”