You are at:Home»Industry»The Wide World of Nor-Tech 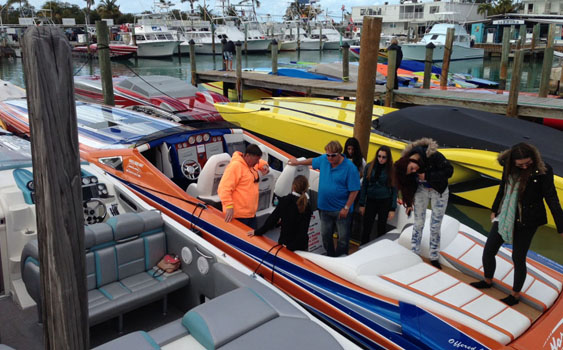 Between the 5000V (left) and the all-new 527 at the docks during last week’s Miami Boat Show Poker Run, the evolution of Nor-Tech’s offshore V-bottom was on display. (Photo courtesy Terry Sobo.)

Although the wild ride of two weeks of boat show madness in Miami is behind them, the folks at Nor-Tech Hi-Performance Boats are not showing any signs of slowing down. Frankly that doesn’t surprise me at all.

While I wasn’t able to stick around in South Florida for the Florida Powerboat Club’s annual Miami Boat Show Poker Run to see Mark and Eileen Fischer run their all-new 527 V-bottom with twin Mercury Racing 1350 engines, I was able to catch a ride in the jaw-dropping 52-footer with Nor-Tech’s Trond Schou, one of the founders of the North Fort Myers, Fla., company, on my last day at the Miami International Boat Show.

The next generation of Nor-Tech’s 5000V, the 527 that was dockside at the in-water portion of the show has a larger cockpit (thanks to side-by-side engine installation) and center-position steering and helm seats like its 427 and 477 siblings. And I’ll tell you what, from the performance to the interior to the paint job, the orange and blue boat owned by the couple behind Off Lease Only and Boats Direct USA is remarkable. When we were leaving the docks for the demo ride and coming back in, there were dozens of people taking pictures and/or video of the 527. 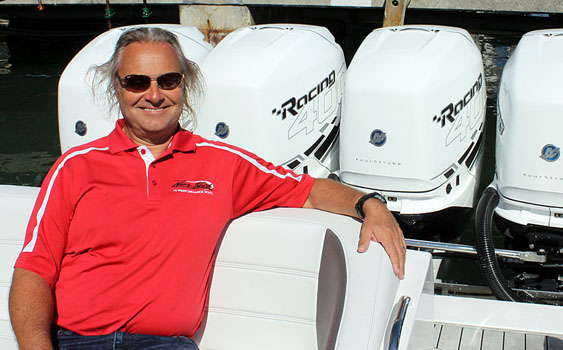 Nor-Tech’s Trond Schou poses for a quick photo in Miami before taking a group out for a demo ride on a 39-footer with four new Mercury Verado 400R engines. (Photo by Jason Johnson.)

Here’s the thing, the big super-powered 52-footers are far from Nor-Tech’s most popular models—obviously outboard-powered center consoles have dominated the company’s production lately—but oh wow is the new 527 impressive. Though I could probably say that about each one of the boats Nor-Tech had on display in Miami.

And to think that there wasn’t even an offshore catamaran in that mix, a model Nor-Tech really built its reputation on and now offers in 40- and 52-foot versions. The company does have a turbine-powered 52-footer in production, but the cats are no longer its bread and butter. 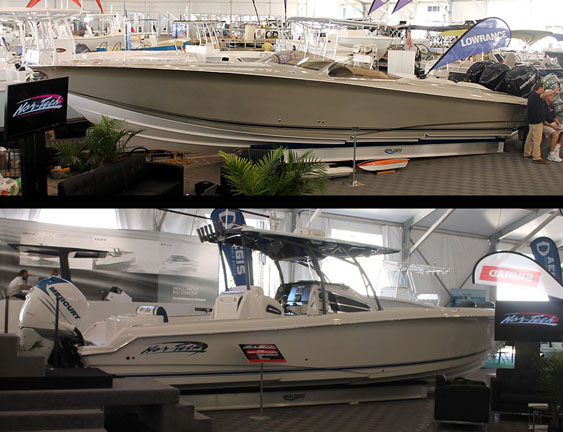 Two of the three Nor-Tech models on display at the Miami International Boat Show—a 360 MC Flyer (top) and a 340 Sport center console. (Photos by Jason Johnson.)

The product diversity, which ranges from V-bottoms to center consoles to yachts, offered at Nor-Tech is the main reason the business has stayed afloat and flourished despite some trying times in the industry. According to Terry Sobo, Nor-Tech’s director of sales and marketing, there’s not another company out there that has been able to provide such an assorted lineup.

“We really don’t have to rely on one specific product offering, which is nice,” said Sobo, who did the Miami Boat Show Poker Run with the Fischers in the new 527. “We started with our big V-bottoms and then the cats started getting popular so we built the 50 then the 36 then the 43, and those really put us on the map in terms of volume—especially the 36-foot cat.

“We adapted once again about seven years ago and completely changed the business with the introduction of our center consoles,” Sobo continued, adding that the company is making significant progress on its new 45- and 56-foot center console offerings. “Since then we’ve evolved with our Monte Carlo and Flyer models so we have several different legs to stand on now.” 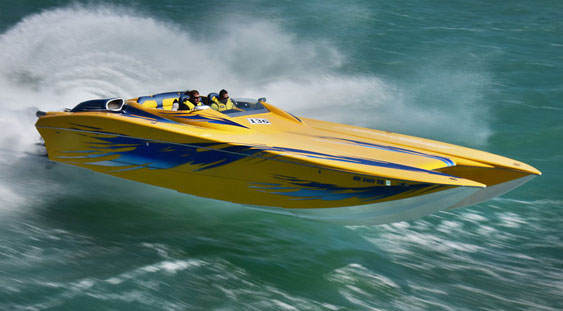 Sobo admits most of his customers use their center consoles to go to seafood restaurants, not to actually catch fish (“Our most popular center consoles doesn’t have a rod holder on them,” he added), but he said that he’s sold quite a few fishing-specific models over the years.

While the potential to run 100 mph in one of the company’s center consoles with warrantied power is achievable thanks to Mercury’s new 400-hp Verados—the white 39-footer in the water in Miami ran 97 mph—Sobo doesn’t envision that being the trend.

“We’re more excited about being able to provide more horsepower with fewer engines on one of our center consoles than we are about one running 100 mph,” Sobo said.

Now 100 mph in a new 527 or a 40-foot cat—that’s a different story. And one you can ask Sobo about if you run into him at next month’s Palm Beach Boat Show in Florida or the 12th annual Boyne Thunder Poker Run in Northern Michigan in July.