You are at:Home»Industry»Waves And Wheels Readying New Black Thunder

A little more than two months ago, I checked in with the principals of Black Thunder Offshore about the rebirth—if you will—of the longstanding offshore V-bottom builder based in Hanibal, Mo. The attitude was certainly optimistic (read the story), but now that the team at Waves and Wheels in Osage Beach, Mo., has gotten a hold of the company’s new-and-improved 46-foot raised-deck V-bottom, the enthusiasm is growing.

Just today, in fact, Black Thunder founder Don Jenkins was at The Boardwalk at Waves and Wheels, and he was blown away by the work that’s been done so far. Justin Wagner and the team at Waves and Wheels received the boat a few weeks ago and have been hard at work on the interior designs and execution ever since.

“I had to pat Justin on the back,” Jenkins said. “He and his team have done an excellent job so far. I believe they’re helping us take the next step forward for Black Thunder boats. Justin really has been an asset. Everything looked good to me today—I’m excited where they’re headed with it.”

Jenkins expects the boat, which is going to be powered by twin Mercury Racing 700SCi engines, to be on the water soon enough. The boat should run 90 mph, which he said is plenty of speed for “the average boater.”

“I know everyone wants speed, but you have to remember this is a comfortable, stand-up, go-fast boat with a condo in it,” Jenkins said. “Our goal is to make the boat accommodating for both the men and the women, and our cabin is a real selling point because of that. It gives the ladies a place to change or get out of the sun. It has everything you need—a bed, air conditioning, TV, refrigerator, head—and all with enough headroom for anybody to stand in it.”

The 46-footer, which is going to be powered by twin Mercury Racing 700SCi engines, is currently in Osage Beach, Mo., getting its interior installed by the talented team at Waves and Wheels. Photo by Justin Wagner

Although he doesn’t want to share any concepts or detail images yet, Wagner did text me a “sneak peek” image for this story.

“It was awesome to have Don here today and get his approval on things,” said Wagner, who owns Waves and Wheels as well as the audio components company, Bluave Marine Audio. “To be honest, we weren’t sure what he was going to think, but I think we impressed him, which was a great feeling for our team. We can’t wait for people to see this—it’s a no-expenses spared interior.”

As expected, the stereo is going to be lights-out with a full array of Bluave speakers and amplifiers. Wagner said he anticipates finishing the boat, which features custom Waves and Wheels dash panels and in-house designed and constructed upholstery, in a few weeks; then it should be ready for testing since the installation and rigging of the 700-hp supercharged engines and NXT1 drives is already complete. 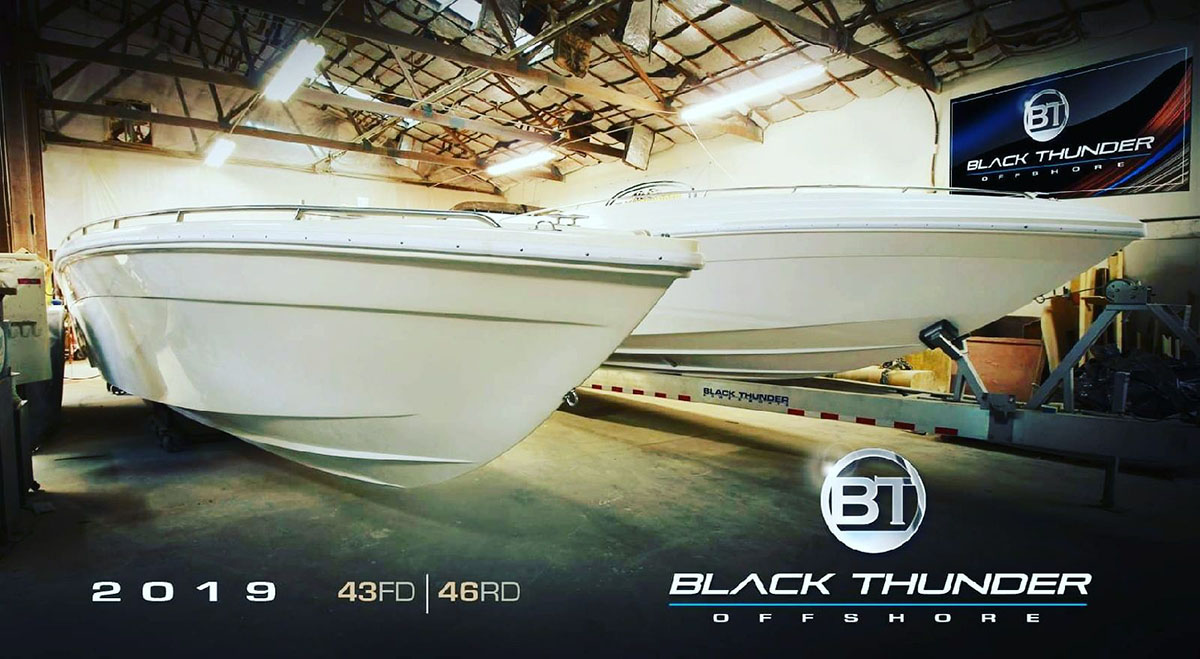 Next in line for Black Thunder is another 46-foot raised-deck model and a new flat-deck 43-foot V-bottom, the first boat featuring the company’s resin-infused, vacuum-bagged lamination process. The 43-footer is going to be powered by outboard engines, which is also new for the builder.

As you might assume, the plan is to keep the information and images coming as these models come to fruition, making the Black Thunder faithful salivate.