You are at:Home»Industry»Welcome Back Black Thunder 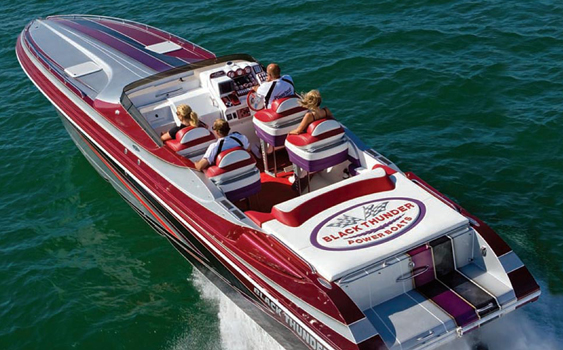 Black Thunder will have a new boat at the Key West World Championships in November and plans to roll out new model unveiling at the 2013 Miami International Boat Show. (Photo by Robert Brown.)

As I reported last week, Black Thunder Powerboats is back. Whether you missed the Hannibal, Missouri-based company or not, it’s great to see a performance-boat builder jumping back into the game. But for the many who were wondering what became of the company with such a rich history in the pleasure and racing industry, the return behind new ownership is flat-out exciting.

There was definitely a buzz at the 2012 Lake of the Ozarks Shootout, which Black Thunder sponsored and had a large presence at the docks in front of Captain Ron’s in Sunrise Beach, Mo. To top it off, one of the company’s 43-footers, owned by Dennis Parvey, won the Top Gun in the Manufacturer V class.

That’s beside the point. And I won’t bore you with the details (you can read it here: Black Thunder Returns with 2013 Production), but the good news is that the company plans to add new models and update its current ones, which include 32-, 43-, and 46-foot V-bottoms. Former and future customers are sure to welcome the changes. One well-respected Black Thunder owner is legendary boat racer Steve David. When I spoke with him Tuesday he sounded delighted about the resurgence, which includes a new sales and service center smack dab in the middle of one of the country’s most popular lakes—Lake of the Ozarks.

David, who owned a 43-footer with triple 500-hp engines for six years and handled demo rides for the company at the Miami International Boat Show for many years, believes there is a market for the Black Thunder line.

“If they build them as good as they did before, and they’re even more sharp in terms of being a little more contemporary, they should be just fine,” said David, who will be racing the Oh Boy! Oberto Unlimited hydroplane in this weekend’s H1 Unlimited race at the San Diego Bayfair festival. “I think if they can truly update the boats and keep the price point favorable, they can sell a lot of boats.

“Black Thunder never had the cool factor of a Nor-Tech or a Cigarette, but the company built a solid boat with great functionality,” continued David, who has stayed in touch with owners Don and Bob Jenkins, who are both still involved with the company. “We spent a lot of time in ours and crossed the Atlantic Ocean to the islands many times, and never had any structural issues. With a little money behind them and some improvements to the molds and the look and feel, I can’t wait to see what they come up with.” 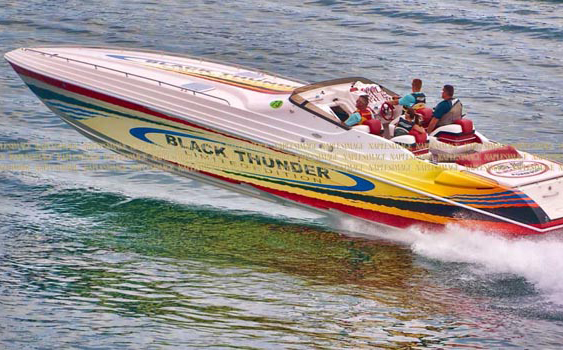 Founded by Don Jenkins in 1987, Black Thunder Powerboats is returning to producing its offshore V-bottoms behind new ownership. (Photo by Jay Nichols/Naples Image.)

David said he spoke with Bob Jenkins recently and was excited to hear about the 32-foot center console the company will be building based off its 32-foot offshore boat that was popular on and off the racecourse in the late ’80s and early ’90s.

John York, who will be handling sales and business development responsibilities at the new Black Thunder Marine Center located on the lake’s 26-mile marker, confirmed that the company will debut a 32-foot center console at the 2013 Miami International Boat Show in February. York also said that the company is working on other new center consoles and some special poker run edition models. He added that all of the boats will be outfitted with the latest and greatest equipment from Garmin electronics to engine packages from Mercury Racing and Ilmor Marine.

As Black Thunder looks to embrace new technology and new product, it’s clear the company has a lot of great ideas in store. That’s wonderful, of course, but I’m just glad to see another builder back in business.