You are at:Home»Inspiration»In the Heart of Desert Storm 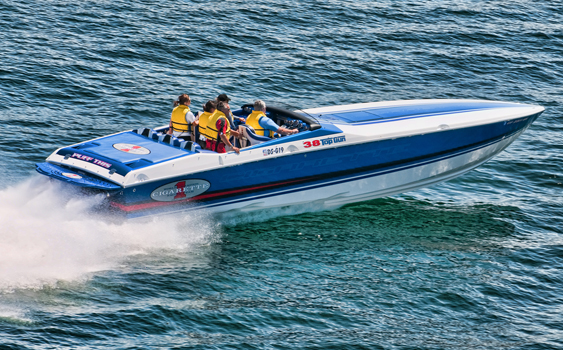 Captured here during 2012 Desert Storm Poker Run in their Cigarette 38’ Top Gun, Dan and Lisa Ellis have been participating in the run for years. But this year they had two special guests on board. (Photo by Jay Nichols.)

After seven or eight trips—they’re not exactly sure how many—to Desert Storm, Dan and Lisa Ellis had done most every legal thing there was to do at the annual Lake Havasu, Ariz.-based event. From the Thursday Street Party, where they had displayed their immaculate 2008 Cigarette 38’ Top Gun, to the Friday Poker Run and more recently the Saturday fun run to Pirate Cove, the couple from Ventura, Calif., thought they had covered it all.

And they were just fine with coming back year after to do it all again. That’s because Dan and Lisa Ellis flat out love high-performance powerboating. After buying their 38-footer from Miami-based Lip-Ship Performance in 2011, they left the boat in South Florida for a few months and made two trips to the Keys. When Cigarette Racing Team announced its inaugural Owners Rendezvous in Destin, Fla., last year, they were among the first owners to sign up. On a local level, they hit the Pacific Ocean—often running to Catalina Island—every chance they get when the weather is warm enough.

But Desert Storm, which happens in late April, is the “official” start of their boating year.

Until the Friday morning drivers’ meeting before this year’s Desert Storm Poker Run, Dan and Lisa Ellis thought they knew exactly what to expect. But that was before the organizers announced that there were several United States Marines still looking for rides in the run. Every year, the folks behind Desert Storm make sure that seats are available for all military service men and women who want them, and the boat owners in the run provide those seats. It’s one of the ways Desert Storm, which takes its name from the 1991 U.S. military operation in Iraq, gives back.

So Dan and Lisa Ellis stepped up. They offered the two available seats in their boat to a couple of young Marines named Sam and Mike, and it turned out to be the best thing they’ve done since they started coming to Desert Storm. 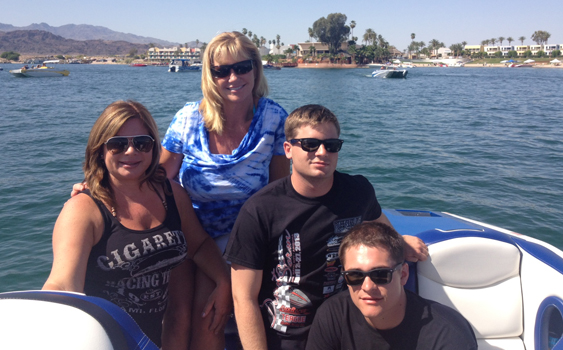 (From left) Lisa Ellis, Vicki Newton and couple of Marines named Sam and Mike, who got the ride of their young lives during the 2013 Desert Storm Poker Run, pose for Cigarette owner-turned-photographer Dan Ellis.

“One of them was from Missouri and one of them was from Utah, I think,” said Dan Ellis. “All I saw was smiles from them. It was great to be able to give those guys a fun ride. We ran toward the back and to the side of the pack, as we always do, so there was no drama. It was just fun, and everyone had a great time.”

The experience was transformative for the Ellis family. And it’s one they plan to repeat next year.

“Guys like Sam and Mike do so much for us,” said Ellis. “For us, having them on board made it really cool. We get to go out all the time and have fun. They don’t. Having them with us made the trip a lot ‘bigger’ and better for us.”

He added, “In the future, I think I’ll sign up ahead of time to give rides. It was just so cool.”

As are Dan and Lisa Ellis, and all the boat owners who open their hearts—and their cockpits—to military service folks during Desert Storm every year.