Competitive by nature, Randy Sweers has the goal of a top-three overall finish for his Racing for Cancer/AutoNation team in the Superboat catamaran class during the upcoming Super Boat International Offshore World Championships in Key West, Fla. And with a decidedly fast 41-foot Marine Technology, Inc., cat powered by a new pair of 750-hp Ilmor Marine engines, Sweers on the throttles, driver Jeff Bentley and their dedicated crew, the team has a solid chance of doing just that.

And yet, if Racing for Cancer/AutoNation finishes dead last in all three races in Key West—heck, if it doesn’t make it out of the dry pits for even one of the event’s three races—it will be a huge winner. That’s because some things, make that many things, in life are bigger than checkered flags and trophies. In fact, those things run a distant second to the team’s primary goal of raising funds and awareness for cancer treatment and research.

It’s a cause in which Sweers, whose wife, Kim, was diagnosed with cancer earlier this year, has a vested interest. And their combined passion for the cause runs deeper still. Kim Sweers lost her father to the disease—Randy Sweers lost his mother to it.

While Kim’s prognosis is good, the battle for the entire Sweers family, including their young son, Chase, and their friends has not been easy. But adversity can be a great teacher and an even greater motivator—at least it has been for Randy and Kim Sweers, who own the Fastboats Marine Group powerboat dealership South Florida. 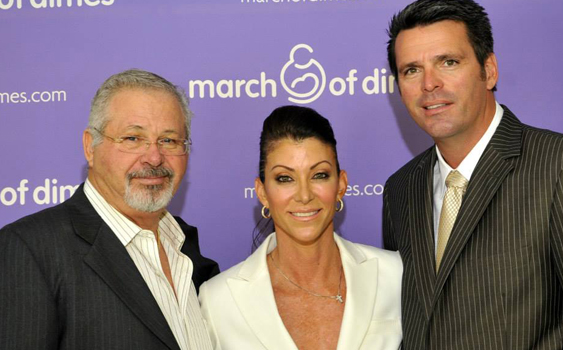 Keith Sweers, Kim Sweers and Randy Sweers at a charitable event in early 2014.

Realizing they had a 41-foot billboard in the form of their MTI raceboat at their disposal, Randy and Kim Sweers signed on with Racing for Cancer, a motorsports-based charity founded by 2012 IndyCar champion Ryan Hunter-Reay. According to its website, the nonprofit organization is on a mission to “unite motorsports fans, teams, sponsors, and drivers to direct our collective generosity toward the global fight against cancer.”

Sweers, who started offshore powerboat racing in 1995, pitched the idea to Mark Cannon at AutoNation. Cannon, who serves as the company’s vice president of corporate communications, and Cannon agreed to get involved, and AutoNation became a sponsor. Gone for the 2014 season were the boat’s Fastboats Marine Group badging and team name. And there’s even more to come to finish out the year.

“As October is ‘Breast Cancer Awareness Month,’ we are making a few changes for Key West,” said Sweers. “You’ll see a little more pink on the boat.

“It’s been a challenging year,” he continued. “It certainly makes you realize there is more to life than going to work and boat racing.”

“We tell people, ‘Get checked, get checked, get checked,’” he said. “It doesn’t matter if you’re 30 years old or 60 years old. We’ve met and spoken to a lot of doctors, and we’ve learned that if you catch cancer early you can beat it. It’s a huge part of the deal. That’s what Racing for Cancer is all about—it’s why I donated the boat to the Racing For Cancer charity this season. It’s something my wife and I are very fortunate to be able to do.

“Everybody wants a way to give back,” he continued. “I am blessed I have been able to do it through a sport I am passionate about and love.”

And that’s why, no matter how the members of the Racing for Cancer/AutoNation team fare in Key West, they’ll return home as champions.