You are at:Home»Key West»10 Reasons Why Key West Didn’t Suck 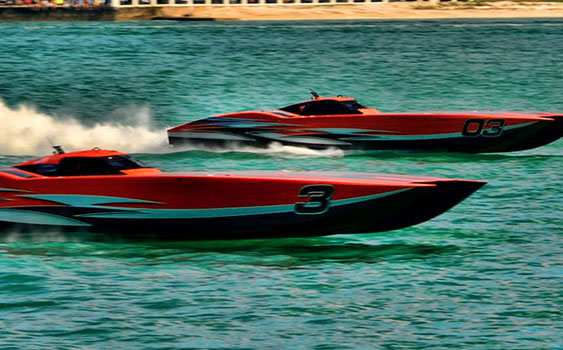 The double-team effort from CMS was simply spectacular. (Photo by Jay Nichols/Naples Image.)

Journalists love lists. Want to know why? They’re not as hard to write as, well, real articles—you know, the kind where you have to choose words and write complete sentences and build paragraphs into carefully structured, flowing features that, if you work really hard, tell a compelling story full of action and intrigue and entertaining facts and stuff. Journalists love lists because, frankly, they’re easy.

And to a journalist with the kind of red-tired eyes that come with a frenetic writing pace—the kind that came with last weekend’s Super Boat International Offshore World Championships in Key West, Fla.—this list is too appealing to pass up, and not just because I am dead tired, brain-fried and facing a morning deadline. OK, so yes, those are compelling reasons, but I am also still buzzing from covering the Key West Worlds like I never have been before. They were—I’m not sure how to say this so I’ll just spit it out—really good. Strike that. They were great.

So here comes my list, but first a quick disclaimer: This list may offend you. You may feel it has omissions. You may believe it is completely unfair. You will be entitled to those opinions. 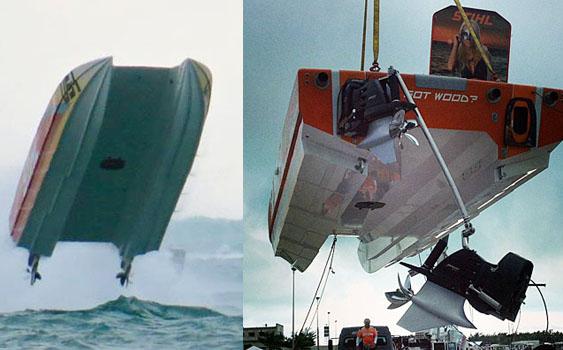 In the Superboat Unlimited, Superboat and Superboat Stock classes, the three top seeds heading into Sunday’s races broke in what every racer I interviewed called the nastiest Key West conditions they’d seen in years. Yes, I realize the course was short and close to shore—so close that fans and team sponsors could actually see the boats racing. (Go figure.) Sunday’s waters were downright foul, but don’t take my words for it. Just look at that day’s pictures. 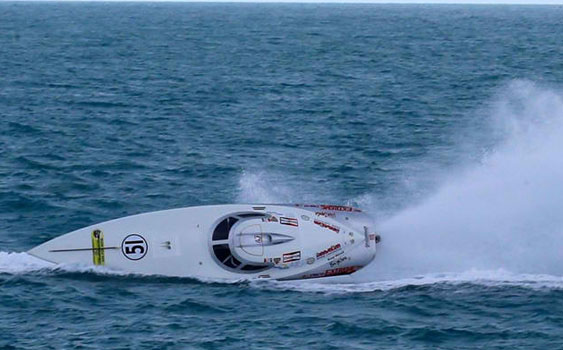 The heated rivalry between Sun Print and Snowy Mountain Brewery made for fine drama and wild action. (Photo by Pete Boden/Shoot 2 Thrill Pix.)

The odds—meaning not a chance in hell to put a fine point on them—of Superboat Vee-class competitors Steve Miklos and Michael Janssen breaking bread together any time soon are about the same as Superboat Unlimited’s Bob Bull and Marc Granet sharing a Cobb salad, and that’s a good thing for the sport. Rivalries create fan bases. They create heroes and villains. They fuel interest. The more the merrier. The hotter things run, the better. 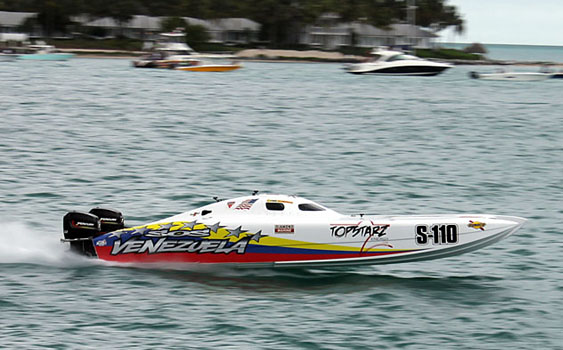 Proving that he’s not afraid to try something bold in pursuit of a world title, Stock-class racer Chris Schoenbohm cut his 32-foot Doug Wright catamaran in freakin’ half, widened its tunnel and put it back together in time for the SBI Nationals. But his real goal was taking a world title in Key West, and Schoenbohm and throttleman Gary Ballough did just that in SOS Venezuela against relentless and—at least on Wednesday and Friday—dominant competition from Talbot Excavating.

Rolling into town and right onto Duval Street for the second year in a row with contagious enthusiasm and a good-time attitude, Hammer Down Boating’s George Tobin and Rodney Olson have created a Facebook page for offshore racing that reflects the energy and excitement they’ve discovered in the sport. They keep it fun and funny and joyful, and their efforts have been embraced by fans—including this one—and racers alike. 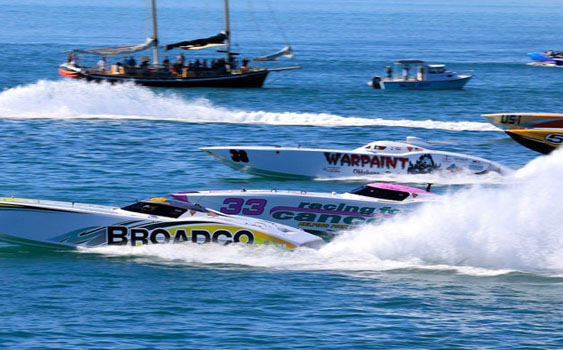 Hear that sound? That’s the grinding of the teeth of old school offshore racers who are reading this right now. Sure, there’s a certain nobility in pounding your spine into raspberry jam in “Victory at Sea” conditions at the edge of the horizon where only the gulls can appreciate your heroics. (Are you sensing a theme emerging?) And yeah, not being an offshore racer I’m guessing flat-water races are easier to throttle (assuming you have enough self-control not to let your ego overtake your good judgment). But there’s also something inherently cool about flat-water drag races, and the one between the two CMS catamarans on Friday was simply breathtaking.

6. The Battle of Broadco and Stihl 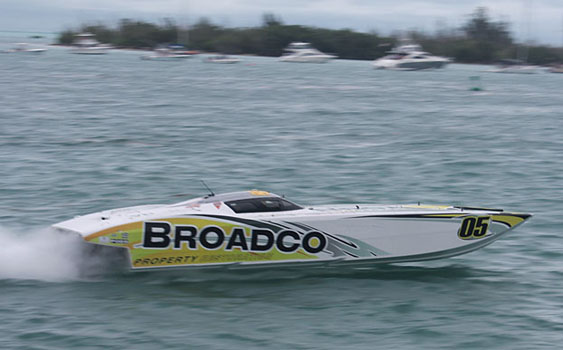 You’ve surely heard the expression, “Leave it all on the field.” Well, these two Superboat-class teams, which had battled it out all season with the Stihl cockpit duo of J.R. Noble and Mark Kowalski taking National Championship honors, definitely left everything out there during Sunday’s race. In fact, the Stihl team even tried to leave its port drive and propeller on the ocean floor. But in the Broadco versus Stihl, MTI versus Skater catamaran battle, Broadco’s Chuck Broaddus and Grant Bruggemann prevailed and left Key West as 2014 world champions.

With zero offense intended to any of the hardworking and talented photographers out there including Freeze Frame’s Jeff Gerardi, Jim Winters of Nikon Miami, Jay Nichols of Naples Image and anyone else now crossing me off his holiday gift list, Pete Boden produced one killer image after the next this year.

What do these annual Florida Powerboat Club events have to do with SBI Offshore World Championships? Well, aside from bringing a whole mess of performance-boat owners, some who even manage to catch a race or two between celebrations, to Key West, they bring in a whole mess of beautiful hardware to a pleasant venue. With the raceboat dry pits being located in a concrete-and-dirt Siberia known as Truman Annex, the bounty of pleasure boats at the docks in more hospitable and accessible locations are great for the fans, as well as the overall atmosphere of the races. 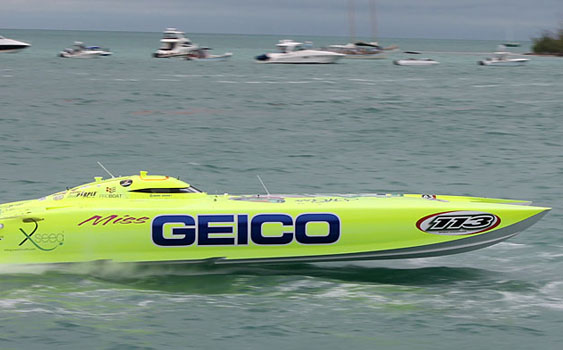 Forgive me Marc Granet, Scott Begovich, Gary Stray and the rest of the Miss GEICO crew for what I am about to confess: Even though I picked your team to repeat as the Unlimited class world champion this year, I was pulling for the CMS teams after Friday’s race in which the CMS 52- and 48-foot MTI cats put on a high-speed clinic. Bob Bull’s commitment to bringing two talent-stacked race teams to Key West was impressive, and to anyone who suggests, “Hey, he can afford it” I say, “Hey, so what? When was the last time you dropped seven figures on your hobby?” Bank balances go in just one direction for offshore racing team owners, especially those who play in the Unlimited class. Bull’s effort wasn’t just great for the 2014 Key West Worlds, it was great for the sport in general. Still, that Miss GEICO weathered a two-boat storm and came out on top speaks to that team’s commitment as well. Back-to-back world titles don’t come easy. 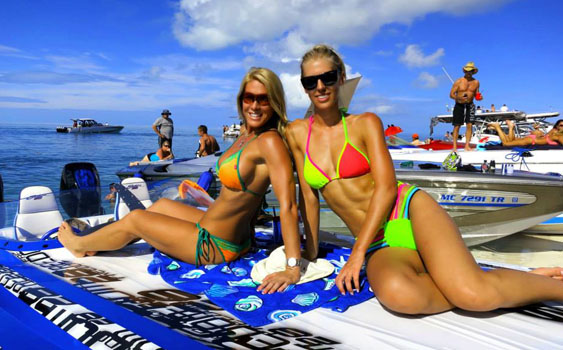 As you may know, “fan” is short for “fanatic,” and that’s exactly what you need to be if you’re a devoted follower of offshore racing. You need the faith of a child, the patience of a saint and the limitless enthusiasm of Hammer Down Boating’s George Tobin and Rodney Olsen to stick with a motorsport that year after year tends to over-promise and under-deliver. But this year in Key West, the fans were rewarded with three days of great racing. And for at least 10 good reasons including their presence, it didn’t suck one bit.