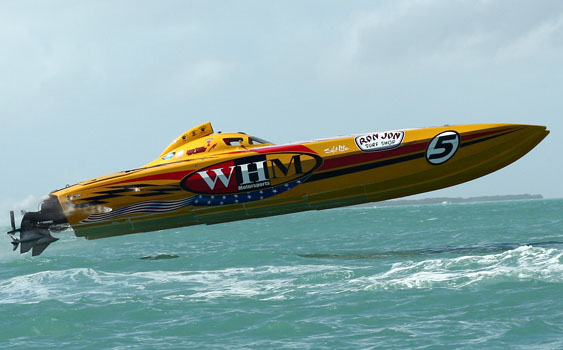 A couple of weeks back I wrote a column for this site called “Embracing The Worlds” in which I picked winners for various classes of raceboats at the 2013 Super Boat International Key West Offshore World Championships. I based my choices on several factors such as the number of races the team entered during the season; the number first-, second- and third-place finishes the teams acquired; the experience levels of the folks in the cockpit and such.

But still, even with whatever knowledge base I brought to the table as an observer of the sport, it was mostly guesswork done mostly for fun—not sure how fun the teams I didn’t pick thought it was, but those I spoke with seemed to take it in the good-natured spirit in which it was given—and to provoke a few conversations.

So how’d I do? Not too well. Actually—to put a fine point on it—I stunk. I picked five races, which means there were five points possible in my elementary scoring system. Here’s how it went down.

In the Superboat class, I had Stihl as the winner and by the time Friday’s races were done I was feeling pretty good about their chances. Robert “J.R.” Noble and Grant Bruggemann had racked up two first-place wins in the Skater cat. Yeah, I was so excited that I forgot to notice that Billy Mauff and Jay Muller had a pair of second-place finishes in WHM Motorsports. Stihl needed to finish in third-place or higher in Sunday’s double points race. The mechanical gods had other ideas. Stihl broke and WHM took the win.

In the Turbine class, I called it a “pick ‘em,” which is as weak as prognostications get. Qatar’s Al Addam 96 started all three races but didn’t last long in any of them, but Semper Fi put itself out of contention by not starting on Wednesday. So after logging something like 14 miles of course, the Qatar-backed 50-foot Mystic cat took the world title. I should have at least tossed a coin, but I didn’t—and that meant I forfeited my chance to earn points. 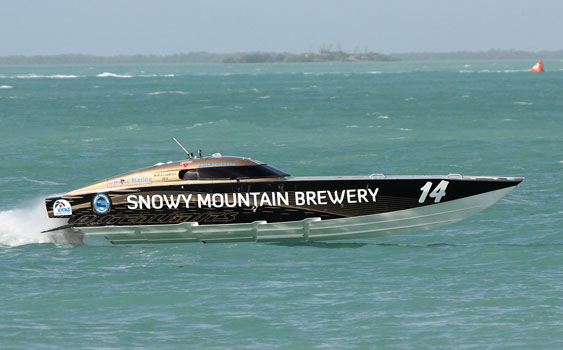 “Run it like you stole it”—that’s what Michael Janssen and Brian Forehand did in Snowy Mountain River on their way to a dominant world title in Superboat Vee.

In the Superboat Vee class, I picked Snowy Mountain Brewery to win all three races, and the 29-foot Outerlimits did exactly that. But if I were any kind of a real offshore prognosticator, I would been able to predict that Steve Miklos in the 29-foot Sun Print Extreme would have done an amazing job of hanging with Snowy Mountain Brewery. In fact, in most of the races Sun Print was the only boat that was even close. But a win is a win, so I’ll take it. 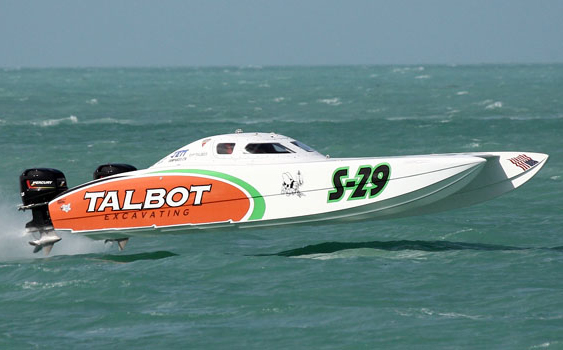 In the Superboat Stock class, my pick, 5 Brothers Grocery, found itself sunny side down—but teammates Ryan Beckley and Chris Schoenbohn were OK—in the third race after finishing third in the first two races. Obviously, that is not the stuff of which world titles are made. The team that had that kind of stuff? 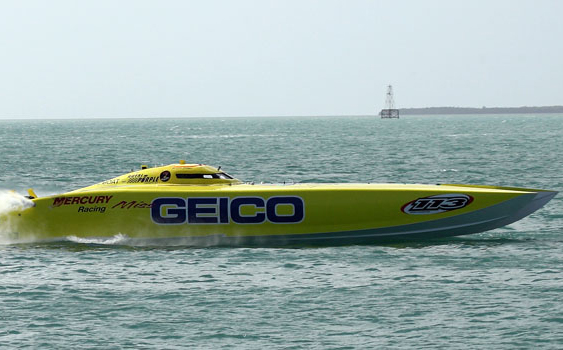 Miss GEICO got the run of its racing career from CMS—but prevailed to take the world title in Superboat Unlimited.

In the Superboat Unlimited class, I picked Miss GEICO to bring home the world title. GEICO took round one and CMS took round two. I still liked my chances until I bumped into Randy Scism of the CMS team on Duval Street Friday night. I had never seen him that intense, maybe even a little irked at the GEICO boys and ready to prove something. That gave me pause—until I talked to Marc Granet of Miss GEICO on Saturday. I had never seen him that intense, and definitely a little irked at the CMS boys. (Word on the street was there was a little bumping and rubbing between the two catamarans in the wet pits.) That neutralized things for me. As for Sunday’s winner-take-all-race, it started hot but CMS broke and my points total doubled.

So out of five possible points, I earned two. OK, you could say the “non-pick” in the Turbine class shouldn’t count against me and that I “got close,” with Stihl, but tell that to Mauff and Muller.

Don’t get me wrong. I’m not about to quit making picks. But based on this performance, you probably shouldn’t bet with me. And you definitely shouldn’t take me to Las Vegas.

All photos by Jeff Gerardi/FreezeFramevideo.net.