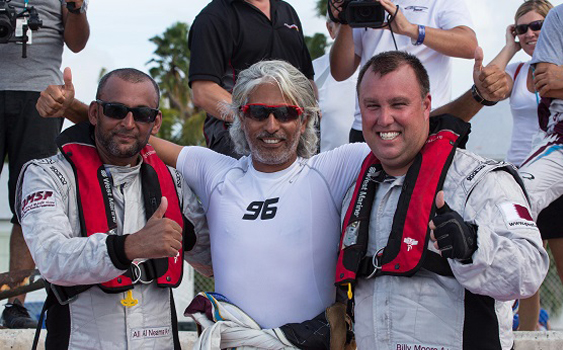 As I watched the action on the final day of the Super Boat International Offshore world championships from Key West, I was impressed by a number of things. The Super Stock class was easily the best action of the week and I have to give a nod to the Snowy Mountain Brewery team and my friend Brian Forehand for their second consecutive title in Manufacturer’s Vee class.

But I also realized something as I watched the races. The future of offshore racing is in good hands thanks to some talented second-generation competitors from some of the best-known families in the sport.

The best performance on Sunday was turned in by the Spirit of Qatar Superboat entry, which was driven by Ali Al-Neama and throttled by second-generation throttleman Billy Moore, son of the inventor of the throttleman position, the legendary Bobby Moore. Fuel starvation problems plagued Moore and Al-Neama’s 42′ MTI on Wednesday and Friday, but once Moore realized that he had full power on Sunday, he put it to good work.

First the 38-year-old Moore over took the Stihl team for second place and then the chase was on as he tracked down Billy Mauff and Jay Mueller in the Skater 40, WHM Motorsports, which looked like an aircraft carrier compared to the rest of the boats in the class. Eventually, with a few laps to go and WHM’s engines banging hard on the rev limiters the two boats charged into the harbor turn side-by-side. Moore and Al-Neama had the inside but WHM had a couple of boat lengths and tried to slam shut the door.

How Moore and Al-Neama made their move stick when it looked as if they had no room at all remains a mystery but as the boats accelerated out of the turn, it was clear that Qatar 20 had a distinct advantage. Moore and Al-Neama pulled away and scored an impressive win for Sheikh Hassan’s team. They wound up third in the overall standings behind WHM and Stihl, respectively. 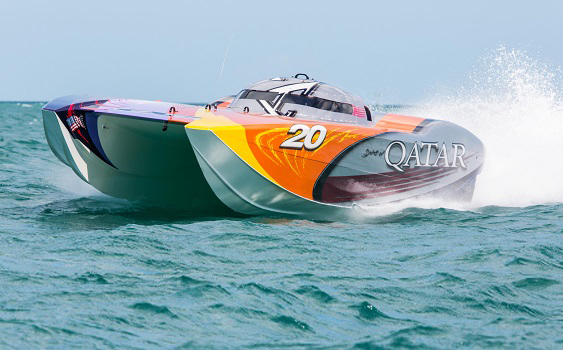 The 39’ MTI Qatar 20 dominated the Superboat class in Key West on Sunday.

Locked into the cockpit of another MTI, the 44’ Marine Concepts entry in Superboat Unlimited, was Reggie Fountain III, the son of the most famous name in performance boating, Reggie Fountain II. Fountain and Randy Kent, the team owner, were under-powered compared to most of the boats in the class, running Mercury Racing 1200-hp engines, but they weren’t lacking speed. After a few days at Real Fast Marine, the facility the Fountains operate in Washington, N.C., the boat was running 199 mph in testing. They headed to Key West knowing what they were up against.

After placing fourth and third, respectively, on Wednesday and Friday, the team started Sunday’s race with a chance to get on the podium. As the more famous names dropped out, Fountain and Kent ran a smart race and were in position to come home in second or third—depending on attrition—but a fire cut short their day.

Still, Fountain had made his statement as a crew chief/competitor. He set up an underpowered boat and throttled it to a competitive position.

Remember that Super Stock race I mentioned? Well second-generation competitor Nick Dorcich of Gilroy, Calif., was in the mix in the Skater 30, Tarpon Point Grill. Racing with Isaiah Blount, Dorcich ran consistently throughout the three-day competition finishing second on Wednesday, fourth on Friday and third on Sunday. The Doug Wright-designed cats had a speed advantage, but the Skater had the advantage in rough water, especially on Wednesday. Dorcich’s father, Stephen Dorcich, knows a thing or two about rough water. He raced on the Offshore Professional Tour in the pink and white Skater 40, Circus Circus, in the 1990s.

Finally, we have Stephen Kildhahl, who’s only 22 years old, but has been racing with his dad Steve Kildahl for seven years. He started when he was 16. They raced their 30’ Phantom, Boatfloater.com, to third place overall in the Superboat Vee class in Key West, an impressive finish. It should be interesting watching these competitors as they carry on the family traditions.