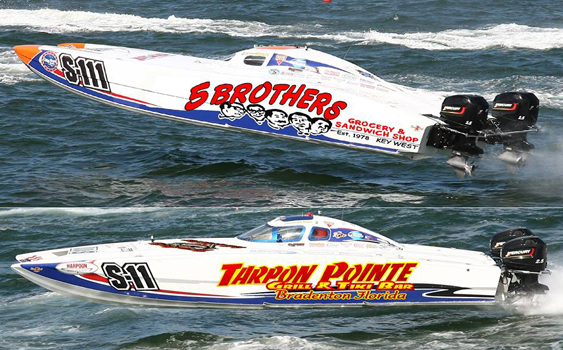 Both boats in this image will compete in the Superboat Stock class under the Doubledge Motorsports umbrella.

Did you know that under the Super Boat International rules a team is not eligible to compete in the annual Key West Offshore World Championships unless it has entered at least three races during the regular season? It’s right there in the SBI rulebook. Now, before you start scratching your head and poring over the races results from the regular season to find out which of your favorite teams are eligible this year, there’s a caveat that’s also right there in the rules: Teams are eligible “at the discretion of the SBIP [Super Boat International Productions] president.”

Ultimately, this discretionary clause is a good thing—at least in my view—for the racers, fans and offshore racing as a whole. The SBI Key West World Championships are, for all intents and purposes, a stand-alone event, and their three-race format levels the playing field. Not that any team in the Superboat Stock class has to worry about getting permission, because most of the teams entered the requisite three races during the regular season.

There is something essentially cool and pure about Superboat Stock class, which consists of catamarans from 28- to 32-feet powered by twin 280-hp two-stroke Mercury Racing outboard engines. With top speeds approaching 110 to 115 mph, the canopied cats are far from slow, and their spec power helps keep them competitive with one another. By the accounts of most offshore racers, including those who run in the faster, bigger-boat classes, the Superboat Stock class brings out the best in throttleman and driver skills. Winning is not a matter of who has the most power and nerve. More often than not, it’s about finesse and keeping the equipment in one piece.

To get a feel for what could happen with the class at the 2013 Key West Worlds, which will happen in a few weeks, I caught up with Ryan Beckley of Kinetic Animation, a vinyl graphics company that specializes in wraps and stickers for offshore raceboats. In addition to his own graphics business, Beckley’s Doubledge Motorsports campaigns two Superboat Stock team, the S-11 and S111 cats, under its umbrella. Beckley gave me the lay of the land, so to speak, on what to expect of the fleet during the Key West Worlds.

For the Key West Worlds, Frank and Jimmies will morph into Talbot Excavating thanks to graphics from Kinetic Animation.

Owned by renowned offshore racer Gary Ballough, the Frank and Jimmies new 32-foot Doug Wright cat, which took the 2012 SBI National title in the class, will run as Talbot Excavating with Kyler Talbot and Jay Muller in the cockpit. Talbot and Muller leased the boat from Ballough, who has a Union Internationale Motonautique X-Cat race in China on the same weekend encompassed by the Key West Worlds. “That boat had the speed all year long,” said Beckley. “But Kyler and Jay have never been in it before. Their first time will be when they run it in Key West.”

By the time it reaches Key West, the Twisted Offshore cat, another 32-foot Doug Wright, will be dressed as The Hulk. But the team in the cockpit, Robert Nunziato and Dan Lawrence, will be the same pair that came close to winning three races during the regular season. “Even though it doesn’t look like it on paper, they had a great year,” said Beckley. “They had Biloxi [Miss.] won but missed a turn buoy. They were leading but broke in Cocoa Beach [Fla.]. They were winning but pulled off early in Clearwater [Fla.].”

Running a 32-foot LA—Lee Austin—catamaran, Steve Quick Jewelers piloted by Steve Quick and boat builder Lee Austin had their ups and downs during the regular season, but could definitely play the role of spoiler at the Key West Worlds. “They ran well in Sarasota but broke in Cocoa and Clearwater,” said Beckley.

Another Superboat Stock racer to run under a different name than it did during the regular season, the 30-foot Skater catamaran Jaralusa.com will become Tarpon Pointe Grille for the Key West Worlds. (The boat is one of two in the class that runs under the Doubledge Motorsports umbrella.) Isaiah Blount and Nick Dorcich will team up in the cockpit for the third time in Key West. “They ran really well in Cocoa Beach,” said Beckley. “It’s definitely a fast boat.”

Want a total wild card? Look no further than the 32-foot Doug Wright cat—the former WHM entry—that will run as Porta Products in Key West. The boat is owned by Scott Porta.

Last but not least, of course, there is Beckley’s ride, 5 Brothers Grocery, a 32-foot Doug Wright catamaran that he ran as Doubledge Motorsports during the regular season with Chris Schoenbohn, the boat’s owner. The team took second place in all four races it ran during the 2013 SBI season. “We weren’t always the fastest boat out there, but we prided ourselves in finishing races,” said Beckley. “That’s what you have to do in Key West. To win a World Championship, you really have to finish all three races.”