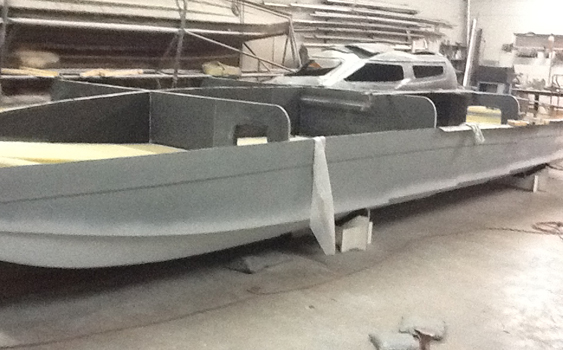 The 30′ LA Marine catamaran Steve Quick Jewelers was laid up with carbon fiber, Kevlar and epoxy resins just like the most high-tech hulls in its class.

In the first race of the Super Boat International Key West World Championships on Wednesday, November 13, the 30’ LA Marine catamaran Steve Quick Jewelers launched off a wave, but then fell into a hole on the backside of a rogue eight-foot wave in front and the tips of the sponsons jabbed straight into it. The hydrodynamic forces tore open the catamaran’s carbon, Kevlar and foam deck and peeled it back like a banana.

After doing a quick inspection of their bodily parts, driver Steve Quick and throttleman Lee Austin gave each other the thumbs up and Austin calmly reached over and shut down the motors. Austin gave credit to the rescue personnel for being on the scene before he even had his seatbelts loosened. 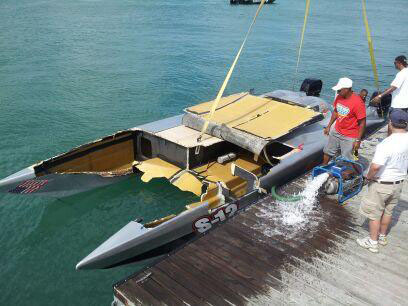 Look closely at this post-accident photo. The canopies, which are beneath the folded-back section of deck, are intact and the occupants of the boat walked away.

While the photos posted  after the accident were dramatic, Austin explained that the leading-edge construction of the boat saved his and Quick’s lives.

“The canopy did its job,” said Austin, who designed and built the carbon fiber and Kevlar constructed boat, which was constructed with vacuum-bagged technology. “The water didn’t even get past the first bulkhead and we’re behind the second bulkhead.” That the rescue team was able to tow the boat back in without having to use floats or pumps supports Austin’s assertion.

He continued, “I’m going to repair it. It’s all superficial in the center and the front. Now that I see that I’m going to beef it, but can you beef it up enough to prevent that? I can’t answer that.” 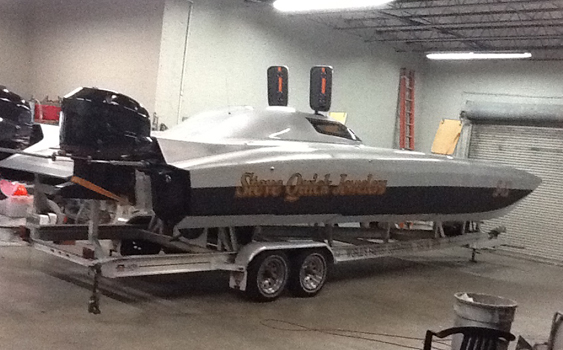 Notice the sloped design of the aft deck, which will deflect water more cleanly if the boat enters transom first after a blow over.

Therein lies the conundrum that is offshore powerboat racing. You built a raceboat light enough to be competitive, which can be a matter of pounds in a class like Super Stock, and you hope it’s strong enough to last. But because of the cost of building boats, it’s not as if someone is going to go out and deliberately crash a boat to test its limits.

Because it differs in appearance from other boats in its class, some outside the sport would look at the Steve Quick Jewelers entry and surmise that Austin is a hobbyist who built the boat in his backyard. That assumption would be inaccurate. Austin grew up in the Florida Keys and built his first boat at age 14. He raced C-Stock hydros when he was 14 and by the time he was 16, Austin got the keys to the car and started drag racing. By the time he was 22, Austin had his own top fuel dragster. He built cars for many of the top names in the sport and was a technical inspector for drag racing’s governing body. He even got into sailboat racing, building 34- and 46-foot competitive hulls. Lee Austin knows how to build competitive machines in myriad motorsports.

Austin spent a few years racing offshore in Puerto Rico. He saw that the Serralles’ family’s Don Q Skater catamarans would fly out to the lead at the start, but then the V-bottoms would take over in the rough water. A pragmatist, Austin decided that the best raceboat would be one that truly combines the best of the catamarans and V-bottoms. 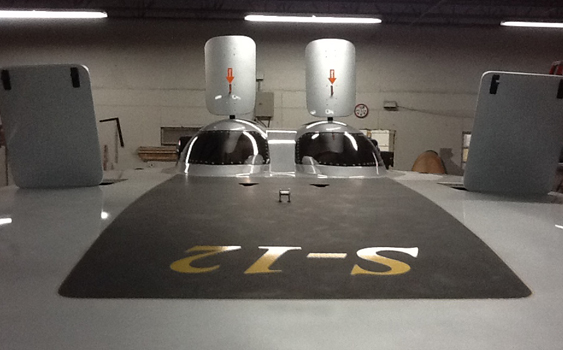 Those canopy lids are designed to follow the contours of the enclosure to more effectively deflect water in a wreck.

He developed what he called the Deep V catamaran, which he says truly combines the best attributes of both designs with symmetrical V-bottom hulls attached by a deck. Austin says his boat is the only true catamaran in the Super Stock class and that all others are actually tunnel boat designs.

The old Steve Quick Jewelers boat was built with conventional vinylester resin and solid fiberglass. That boat holds the SBI kilo speed record in Super Stock class at 119 mph. Austin said it also made a 90-degree turn at 108 mph when a wing plate broke off the steering system on one side and that didn’t turn over. The incident also caused the boat to delaminate down the side, but in all his years of competing in motorsports, Austin said he’s never broken a single bone. To keep things fair, virtually every manufacturer has had its boats delaminate or have structural issues during a racing season.

So when it comes back to the boat that looks like a bomb went off inside it in Key West, Austin has this to say: “There are a lot of safety features on this boat that go above and beyond what other people have.” He continued, “I joke about two old men in a homemade boat, but that’s just cliché. There’s a lot more to this boat than the other boats in our class”