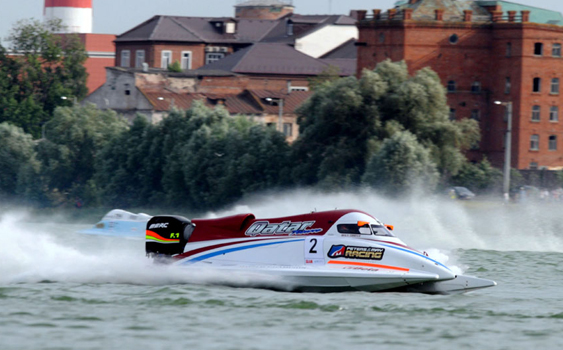 Over the years, I’ve had the opportunity to meet, and even become friends with, many icons in the powerboat industry. From Reggie Fountain and Bob Teague to Steve David and Bob Leach, I’ll never forget the introductions as well as the countless minutes of interviews recorded in the shop or on the water.

And thanks to my trip to Florida for the Super Boat International Key West World Championships last week, I can add another memorable one to that select group—Sheikh Hassan bin Jabor Al-Thani. As president of the Qatar Marine Sports Federation (QMSF), Sheikh Hassan has raced offshore boats in Class 1 and the United States for several years. His organization also supports multiple levels of boat racing from Unlimited hydroplane and Formula 1 to X-Cat and even Jet Skis. 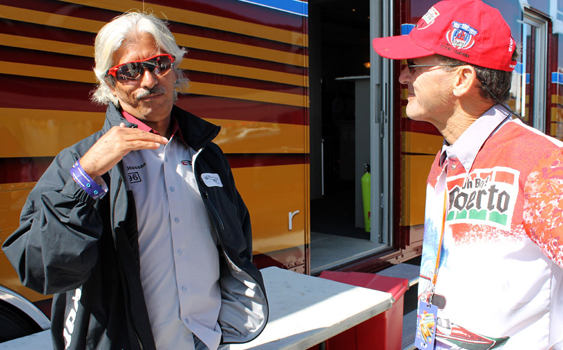 Obviously His Excellency’s passion for racing is extreme, but what was most surprising after my friend Steve David—one of the most accomplished hydroplane drivers in history—introduced Sheikh Hassan to me, was his utter friendliness to me and anyone else he encountered in the race pits during the seven-day racing festival known simply as the Key West Worlds. I guess I was expecting someone a little more reserved.

Although his team finished second to Tor Staubo and John Tomlinson in Gasse, a 48-foot MTI, in the first two days of racing, Sheikh Hassan and legendary British throttleman Steve Curtis came back strong on the final day of racing to outlast both Gasse and the Miss GEICO team of Scott Begovich and Marc Granet, to earn the 2012 Superboat Unlimited world championship. (The final day is worth half of the total points.)

Not at all surprising, Sheikh Hassan was confident in the team’s ability, saying: “As soon as we saw the water [Sunday] morning, we knew it would be our day. Our boat is balanced for rough conditions and Steve [Curtis] is just a master at throttling in rough water.” He also was very open in discussing his team’s future in Class 1, the suspension of his team’s American F1 H2O driver Shaun Torrente and what he thinks about his competitors on and off the racecourse.

Once his team arrived in Key West—with the help of Peters and May’s global boat transportation—Sheikh Hassan made sure he walked over to the Gasse and Miss GEICO teams and told them that if they needed anything to let him know. He’s learned over the years that the American racing community is open and friendly unlike the Class 1 racing environment he’s experienced. At the same time, he also told Staubo and Granet to follow him around the course because he’d show them the way—all in fun, of course. 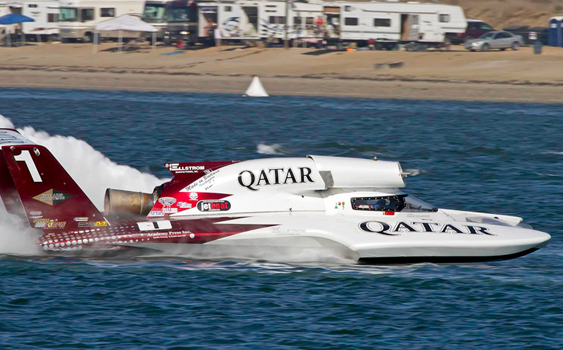 Surrounded by a worldwide crew that works extremely hard, Sheikh Hassan gave a lot of credit to the group from Italy, Norway, Qatar and the United Kingdom for his team’s success in Key West. He also praised the race site, calling it a beautiful venue with great fans. And with little hesitation, he explained that his focus for 2013 would be on racing in the States, not with Class 1.

“To me, 2012 is the last year for Class 1,” said Sheikh Hassan, who earned his degree from Barry University in Miami. “I’m not going to be back because we’ll be doing seven races next year in the U.S. and it’s far more than Class 1 has put on the calendar. Racing in the States is much more laid back anyway.”

It’s easy to see Sheikh Hassan is excited about the new turbine-powered 50-foot Mystic Powerboats catamaran his team will be racing and using for record-run attempts in 2013. We got a little taste of the color scheme of the boat, which is currently being painted, by the team’s new support truck that was on site in Key West. Sheikh Hassan said the truck isn’t completely finished, nor is the F650 Supertruck that will tow the cat.

The race boat has been well publicized, but Sheikh Hassan informed me that he’s also looking at possibly building a new pleasure boat to use in poker runs such as the Florida Powerboat Club monstrosity that ran to Key West for the 20th year in a row last week.

“I love the pleasure boats,” he added. “I walked over [to the poker run village]to see some of the boats, and it was like wow, big time. Some of those boats can outrun our race boat. And I heard there were more than 150 boats for the run. We’re thinking about building something for 2014 to get out there and have some fun.”