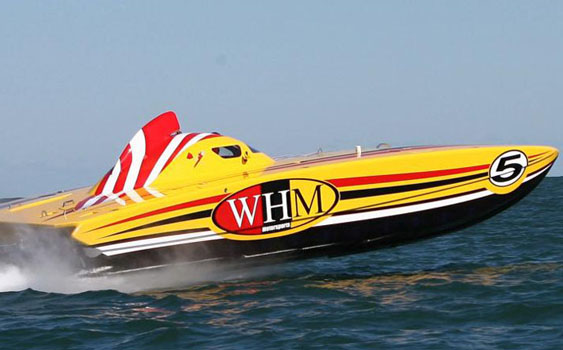 The debut of Billy Mauff’s new WHM Motorsports Skater is sure to be a highlight of the SBI Key West Offshore World Championships. (Photo by Jeff Gerardi/Freeze Frame Video.)

Between the e-mail I received yesterday from the Florida Powerboat Club thanking the sponsors and showcasing the participants for the 22nd annual Key West Poker Run to the long list of Countdown to Key West stories Matt Trulio and I have been compiling on speedonthewater.com, I’m getting more excited about my travels to Key West, Fla., next week on a daily basis.

You see there’s no tiring of the performance-boat industry’s version of “speed week” in the southernmost point in the continental U.S., which also happens to be one of the most beautiful destinations in the country. And here’s why—the people. I know it’s really the boats that bring us all together. But behind every boat is a person who has a passion for designing, building, racing, powering, painting or just plain drooling over the exotic and innovative machines that show up for both the poker run and the world championships produced by Super Boat International.

The challenging part about Key West is trying to see all of those people. Fortunately speedonthewater.com is hosting a party along with BurgerFi Key West on Friday night from 8 p.m. to 10 p.m. at the restaurant hot spot on Duval Street. (Anyone is welcome to attend—get the full details here.)

Tops on my list to shake hands with on Friday night is Gino Gargiulo, the owner of Raging Bull, the stunning Lamborghini-themed 48-foot Marine Technology Inc., catamaran that is entered in the poker run. Without the help of Gargiulo, a co-owner in the joint with BurgerFi founder John Rosatti, who is running his 52-foot BurgerFi MTI in the poker run, the gathering wouldn’t be happening.

Beyond Friday night’s party, which takes place during the SBI boat parade on Duval Street, I hope to take full advantage of the parade, the poker run village and the race pits to visit with as many people as possible. Heck, I may even sacrifice (wink) and venture to Boca Grande Key for the fun run. I could find myself spending quality time with Nor-Tech’s Terry Sobo and his girlfriend, Chrissy, as well as with Louisiana’s Nate and Robin Michel, who own a 47-foot V-bottom from Outerlimits, or the bi-coastal George and Shannon Argyros, who own Mayhem, a 44-foot MTI. I’m thinking that Mike Thornton and his crew in Frisky Business, a 388 Skater Powerboats catamaran, would welcome a journalist friend from California, too.

From Marc Granet, John Tomlinson, Joe Ferrer and Gary Ballough to Nigel Hook, Billy Mauff, Ryan Beckley and Doc Janssen, the list of offshore racers I’d like to hang out with is long. At least with those guys they’re a little easier to catch up with as they’re either racing, testing or working on their boats.

The insight gleaned from hanging out and interviewing the race teams is invaluable and unforgettable. As is chatting with the Sunsation Powerboats guys or the crew from Mercury Racing at the docks in front of the Conch Republic.

But it’s hard to beat the random Key West moments—the sharing shots of whiskey on the balcony above Irish Kevin’s with friends from California, Indiana and Florida; the hanging on the street corner in front of Rick’s Bar with Mystic Powerboats founder John Cosker and Bob and Kathy Latham of Latham Marine; or the consuming of late-night pizza slices with SBI’s media relations guru Rodrick Cox—those are the memories that last forever.

Time is really the only thing that will prevent me from visiting with everyone I want to see. I guess I’ll have to sacrifice sleep. Oh wait I already do—it’s Key West.