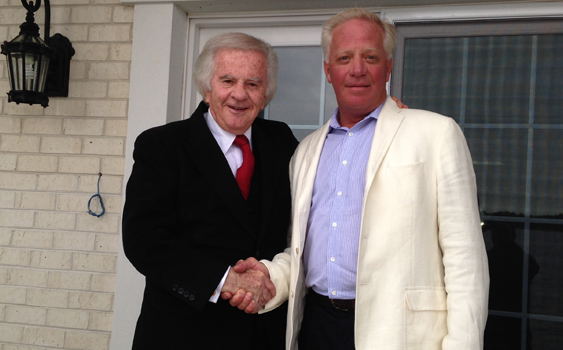 By the time you read this, you will have probably learned that the Outerlimits crew broke the 172.876-mph American Power Boat Association “Special Event” kilometer speed record on Monday in Washington, N.C., by offshore racer Brian Forehand in one its canopied 43-footers. You’ll likely know that Forehand and Joe Sgro topped that speed with a top end of 180.500 mph yesterday.

You’d think Reggie Fountain might be bent out of shape about the “world’s fastest V-bottom” bragging rights that—until this week—belonged to him and Ben Robertson for ten years. Fountain, the founder and then-owner of Fountain Powerboats in Washington, and Robertson piloted a 42-foot Fountain V-bottom to a kilo mark of 171.88 in 2004. Despite that he no longer owns the company he started, Fountain was mighty proud of that record—as he should have been.

But “bent out of shape” was the last way I’d describe Reggie Fountain when offshore racers Michael “Doc” Janssen and Dan Davies—both Fountain and Outerlimits fans— and I had lunch with him Monday afternoon. Of course, the subject of the morning’s kilo runs came up (“Looked like he backed out of it a little early,” Fountain said more than once in reference to Forehand’s runs in the 43-footer earlier that day) but it didn’t even come close to dominating our conversation.

Instead, Fountain captivated us with tales on a range of subjects from the infamous Ben Kramer and the business dealings of Don Aronow to the construction of his four-story home to his days of frying one Mercury outboard engine after the next as a tunnel boat racer with the likes of Bill Seebold and Earl Benz.

In short, Fountain was a true Southern gentleman. Sure, his famed sales bluster pops up now and again, but mostly what you get from Fountain these days is humility and gratitude for a live well-lived. When our conservation drifted to Forehand, his former employee, and Outerlimits company founder and owner Mike Fiore, the famously competitive Fountain offered nothing but praise. (Again, the conversation rarely went in that direction during our time with him.) And he seemed genuinely excited to have some high-performance powerboat action back in Washington, where for several years he annually hosted kilo runs and an offshore powerboat race in front of his factory.

Fountain was a class act in the face of what had to be a difficult day for him. Though he’d surely rather have had the accomplishments of the day to be his own, he appreciated what had happened on the river that runs by his home.

Will the Fountain faithful ramp up—as has been suggested by brand loyalists, Fountain owners and Fountain’s son Reggie since the people at Outerlimits first announced their attention—to reclaim the “world’s fastest V-bottom” title? At this writing, no one has come out to publicly commit to an attempt to regain the crown

But one thing’s for sure: Regardless of what happens moving forward, Reggie Fountain will remain an approachable, gracious icon in the high-performance boating world he helped create.