You are at:Home»Legends»The Art Of Chill 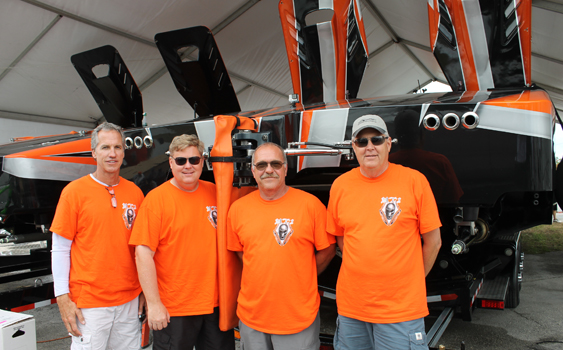 The deck-to-deck tangle of high-performance powerboats on trailers inside the storage facility at TNT Custom Marine in Miami right now, which includes five Marine Technology, Inc., catamarans, four Skater catamarans and a 32-foot Doug Wright cat doesn’t faze John Tomlinson, who co-owns TNT with Mike Thomas, his longtime friend and business partner. And those are the boats on the facility floor—dozens more are high on chronically full storage racks.

Nor is Tomlinson amped up about the current assortment of repower and rigging jobs, which include everything from installing twin supercharged 1,550-hp engines from Sterling Performance in a 36-foot Skater cat owned by noted poker run enthusiast Ron Szolack to installing a pair of Mercury Racing 520 engines in a restored 31-foot Bertram V-bottom built in 1969, on TNT’s plate.

“Business has definitely picked up, but we’re always busy this time of year with boats that come down from the Northeast for the winter,” said Tomlinson in his typically low-key fashion. “We can’t take in any more boats right now, but there are no more winter boats coming down. We’re just staying busy.”

And right about the time when Tomlinson’s business as the co-owner of one of the finest high-performance marine rigging and service shops in the country will slow down, his other business as a professional throttleman will pick up. This season finds him particularly flush with offshore racing gigs that include throttling for the Abu Dhabi team on the Union Internationale Motonautique Class 1 circuit, throttling for the CMS Superboat Unlimited-class team that is owned by racer Bob Bull and competes on the Super Boat International Circuit and possibly, though at this point it’s a long shot, throttling with a yet-to-be-disclosed Superboat-class team.

With the likelihood of the CMS team competing in four Florida races this season—Cocoa Beach, Marathon, Clearwater and Key West—a possibly full slate of UIM Class 1 races in Europe and the Middle East and a potential late-season run in a Superboat-class raceboat, Tomlinson would be right to feel a tad anxious. And yet the needle on his personal stress meter hasn’t budged. As an offshore racing throttleman, one of the best the sport has ever seen, for almost 30 years, Tomlinson has learned to stay relaxed, focused and in the moment.

“With the offshore racing world and the industry, things change fast,” he said. “One minute you’re in, the next you’re out. We don’t even have a schedule for UIM yet, but we could be going over there to test in a couple of weeks. But it’s offshore racing, right? All of these things could come together, and all of them could fall apart.

“I have to talk to Randy [Scism, the owner and founder of MTI] in the next day or so,” he added while stifling a yawn. “He’s on his way back from the Dubai Boat Show.”

But before any of his offshore racing duties begin, Tomlinson will head to Lake Havasu in Arizona, where he’ll throttle Jon Roth’s Skater 388 catamaran in the annual Desert Storm Poker Run. That’s the same open-cockpit 38-foot cat with twin 1,700-hp supercharged engines from Carson Brummett that Tomlinson throttled to 197 mph at the 2014 Lake of the Ozarks in Central Missouri last summer.

Between now and then, Tomlinson will run any number of seriously fast catamarans and V-bottoms handled by TNT Custom Marine—some brand new and others not so new but either re-rigged or set up with new power—on the waters of Biscayne Bay before they go back to their owners. So it’s not as if he’ll be lacking for seat time when the domestic offshore racing season begins. Just as he always has been, he’ll be ready to go.

So what is he most excited about right now? That’s an easy one for Tomlinson.

“We opened my stepson’s micro-brewery in Miami in January,” he said. “So he’s making beer and open on the weekends. That took a lot of work and it’s nice to see it up and running.”