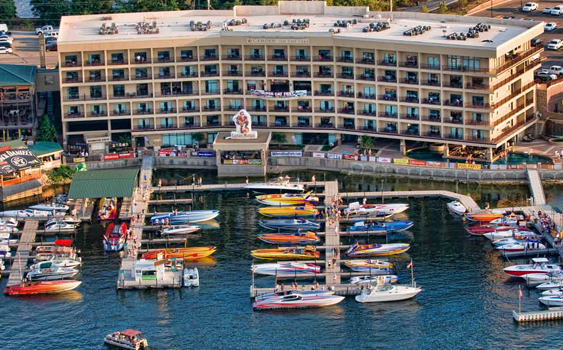 Catamarans of all shapes and sizes gathered at the Camden on the Lake Resort for this year’s SuperCat Fest. (Photo by Jay Nichols.)

I know, I know. As the headline states, I’m already hyping up next year’s 25th annual Lake of the Ozarks Shootout and it’s only been two days since Greg Olson held up the 2012 Top Gun trophy at the 24th annual event in Missouri after making a seriously impressive 192-mph run in his Eliminator Boats 33 Daytona with twin 1,800-hp GT Performance engines. But believe me, next year’s silver anniversary will be something you don’t want to miss.

From jaw-dropping runs such as the one from Olson, who lives in Alliance, Neb., and another from Brad Rowland, who drove his South Bay powered by triple 300-hp outboards to 112 mph to claim Top Gun in the non-professional pontoon class, the thrill of watching and hearing runs like that have defined the Shootout for parts of four different decades. Fortunately over the last few years—and hopefully for another 25—the event has surpassed just being a two-day top-speed race as organizers now deliver a full week of activities in and around the sprawling Lake of the Ozarks. 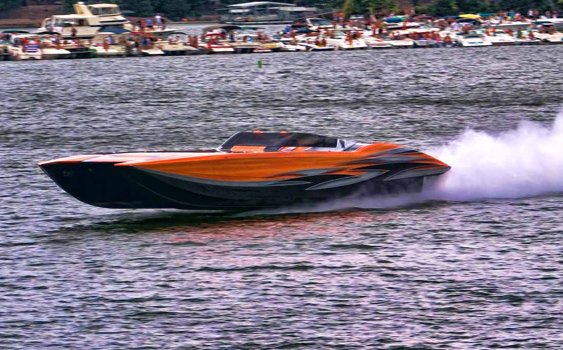 “We had so many cool things happen this year,” said Ron Duggan, owner of Captain Ron’s, the inviting and expansive property that has hosted the Shootout since 2008. “The new radar guns were a big hit. We had our Make a Wish charity rides, which are so rewarding, and the street party was a huge success again. Every event we have seems to be getting better thanks to more exposure.”

The Shootout committee, Duggan continued, “will be doing its follow-up sessions very soon, which are always good. I plan to continue making improvements to the property like we did this year by adding more area for the kids and some new walkways. We’ve got some great ideas for the 25th anniversary. The milestone is a perfect time to do a lot of things.” 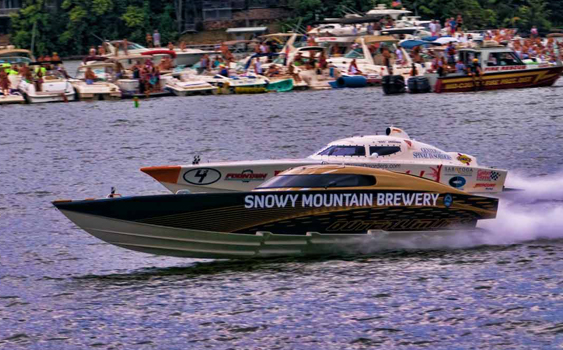 Both of Michael “Doc” Janssen’s canopy race boats—the Watch Your Back Fountain and the all-new Snowy Mountain Brewery Outerlimits—provided some exciting drag-race exhibitions this year. (Photo by Jay Nichols.)

Along with a rumored Hall of Fame to celebrate the anniversary, Duggan said the event committee is considering running the Shootout races on Friday and Saturday, and moving the poker run to Thursday—that way Sunday becomes more of a travel day where the boaters can leave at their leisure. Surely the change couldn’t hurt, as the Sunday spectator fleet is always noticeably smaller.

“A lot of these guys are coming from far away, so if they had Sunday to travel that might make it easier,” Duggan added. “We’ll see. We’ll look at what we can do to make everything better—just like we do every year.” 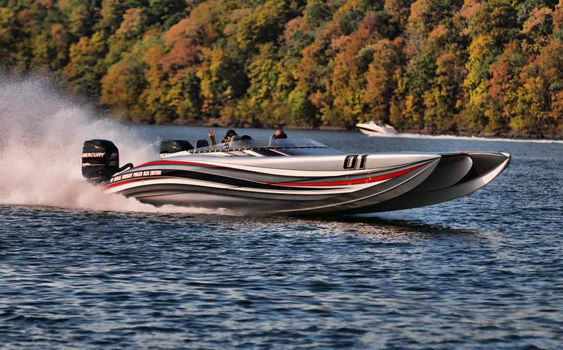 John Caparell came from San Diego to run his Doug Wright 32 Poker Run Edition in the poker run and Shootout. He clocked a 113-mph top speed to win his class. (Photo by Jay Nichols.)

As always, I enjoyed a few days at the Shootout. And luckily for me, I caught rides on a few impressive boats, including Justin Wagner’s stellar Ironman-themed Hustler Powerboats 377 Talon, Lake Ozarks Marine’s 36-foot Deep Impact and the prototype SV42 center console from Marine Technology Inc. (MTI)—look for my story on the highly anticipated model on speedonthewater.com on Thursday. I was also able to hang around the docks at a few of the hottest spots on the lake (Captain Ron’s, Camden on the Lake, and Dog Days) and visit with many of the Shootout participants and quite a few friends from the industry, including Terry Sobo of Nor-Tech Hi-Performance Boats, Sunsation Boats‘ owners Wayne and Joe Schaldenbrand, MTI founder Randy Scism, Mike Fiore of Outerlimits Powerboats, Mystic Powerboats’ John Cosker, Peter Hledin of Skater Powerboats and Steve Tripp from Revolution Performance Marine. 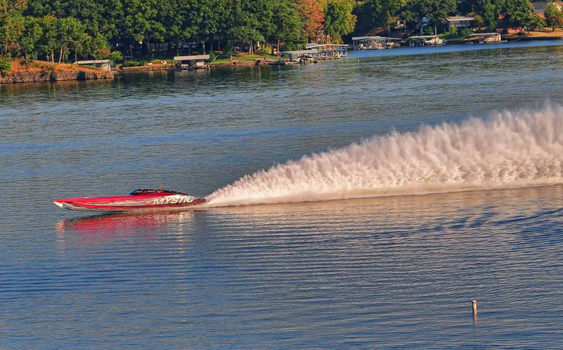 Owned by Tom Borisch, this new 50-foot catamaran with twin Mercury Racing 1350s and an amazing paint job from Boat Customs was one of the showstoppers at the lake over the weekend. (Photo by Jay Nichols.)

There’s a possibility I could run into all of those principals at the Key West Poker Run or the Miami International Boat Show or possibly the Desert Storm Poker Run, but there’s little chance I’d also see a couple of 100-mph pontoon boats docked next to a single-engine 26-foot Checkmate, next to a 42-foot Fountain race boat, next to a 1990s-era outboard-powered 28-foot Skater. The consensus—there’s nothing like the Shootout in the country.

“Once again, the event had a great turnout,” said Scism, who throttled Bob Bull’s 48-foot MTI with Mercury Racing 1350s to a 186-mph top speed to win the manufacturer catamaran class Top Gun. “The street party was phenomenal and we stayed very busy between the poker run, the fun runs and everything else. It’s just such a great venue—everybody needs to put it on their bucket list.”

Certainly the 25th anniversary will be one for the ages. I know I can’t wait.