You are at:Home»LOTO»Focus on the Shootout 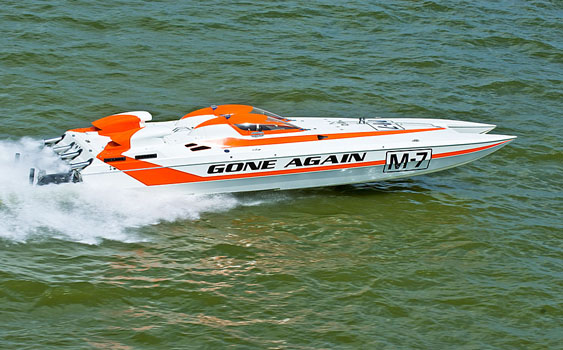 There will be a lot of eyes glued to the course and the TV screen when Kenny Mungle runs Gone Again, his 32-foot Skater with twin 1,700-hp Sterling engines, at the Lake of the Ozarks Shootout. (Photo by Jamie Russell.)

When I wrote a preview on the many events surrounding this week’s Lake of the Ozarks Shootout six weeks ago, it seemed like I had plenty of time to prepare for my annual journey to Missouri. All of a sudden, the event is upon us and I can’t wait to catch my flight on Thursday for the 26th annual Shootout hosted by Captain Ron’s in Sunrise Beach.

Of course, catching up with many of the people I usually see just once a year at this event is a major highlight, but the main attraction is the boats. So, while I’m sure to leave out some people (I apologize in advance), I thought it would be cool to take a look at some of the notable boats that are expected to participate in the Shootout.

Let’s begin with a couple of the high-powered Mystic Powerboats catamarans that are expected to lay down a fast speed. The favorite to win this year’s Top Gun obviously has to be the Qatar Team’s turbine-powered Al Adaa’am 96 (read the story), while Don Onken’s 52-footer with four V-16 engines is ready to hit the one-mile course, according to Mystic owner John Cosker, and should reach a very respectable number.

Several Marine Technology Inc. (MTI) catamarans are sure to hit some blazing fast speeds, including the 52-footer owned by longtime Shootout participant and offshore racer Bob Bull as well as the 44-foot Batboat owned by Shawn Vinson. Another radical MTI that is expected to show up for the event is Randy Kent’s 44-footer, which is powered by a set of special engines from Precision Marine and will feature an all-new look courtesy of Visual Imagination along with a complete re-rig from the talented crew at Real Fast Marine. 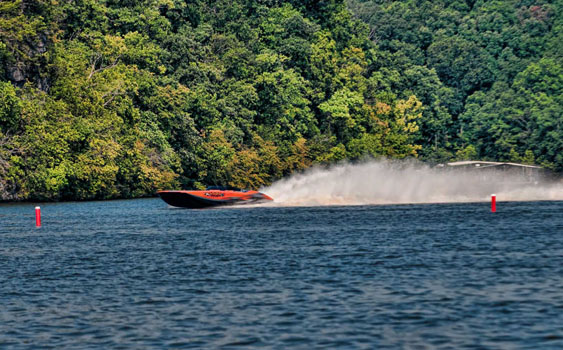 Of course, what would the Shootout be without several fast catamarans from Skater Powerboats taking to the course? Vern Gilbert and Gary Smith are planning to run the original Predator Skater, which earlier this year hit 176 mph at the Texas Outlaw Challenge (read the story). And I’m definitely looking forward to seeing Skater Nation enthusiast Kenny Mungle run Gone Again, the 32-foot raceboat he restored several years ago. Mungle has been testing the boat with its refreshed 1,700-hp Sterling Performance engines and is expecting to lay down a big number—Texas Badass style.

Although the speed isn’t expected to be jaw-dropping, I know quite a few people are looking forward to seeing the recently restored 32-foot Skater High Risk (read the story), which is powered by a pair of outboard engines, at the event. Then there’s the 338 Skater owned by Louis Marchese that is powered by Young Performance engines and could post an impressive top speed.

Marchese’s friend and longtime Shootout competitor Ivan “Buck” Stracener of Southern California is bringing his 28-foot Nordic Boats catamaran to the event again, and Stracener said he’s made a few changes to the boat, including new engine coils, new propellers and a complete blueprint of the hull, that could push him beyond the 150-mph mark. Win Farnsworth’s Silver Lining, a DCB Performance Boats M41 with twin Mercury Racing 1350 engines, also will be on hand for the second year in a row. 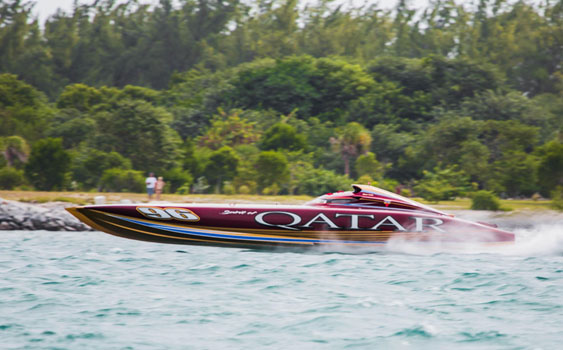 And I can’t leave out the boat that delivered Greg Olson the 2012 Top Gun trophy with a 192-mph pass—the 33-foot Eliminator Boats catamaran that has a new owner (read the story). Although Tim Pivonka, who has competed in the Shootout several times in his previous Eliminator, is not expecting to compete for the Top Gun as the GT Performance engines have been detuned since Olson’s run two years ago, he can’t wait to give it a go on the course in front of thousands of spectators.

In the V-bottom category, the father-and-son team of Dennis and Jason Parvey has been thrashing to get its PF Marine Intercoolers 43-foot Black Thunder ready for the Shootout. I also know several Outerlimits V-bottoms (and the company’s stunning new 46-foot catamaran) will be on hand to tackle the Shootout course as well as be on display at the new Performance Boat Center location at mile marker 21.

So there you have it. Obviously speedonthewater.com will be providing real-time coverage on the site and its Facebook page, but you also can check out the weekend’s competition via the online broadcast provided by KRMS Radio.