You are at:Home»LOTO»Ready to Party? 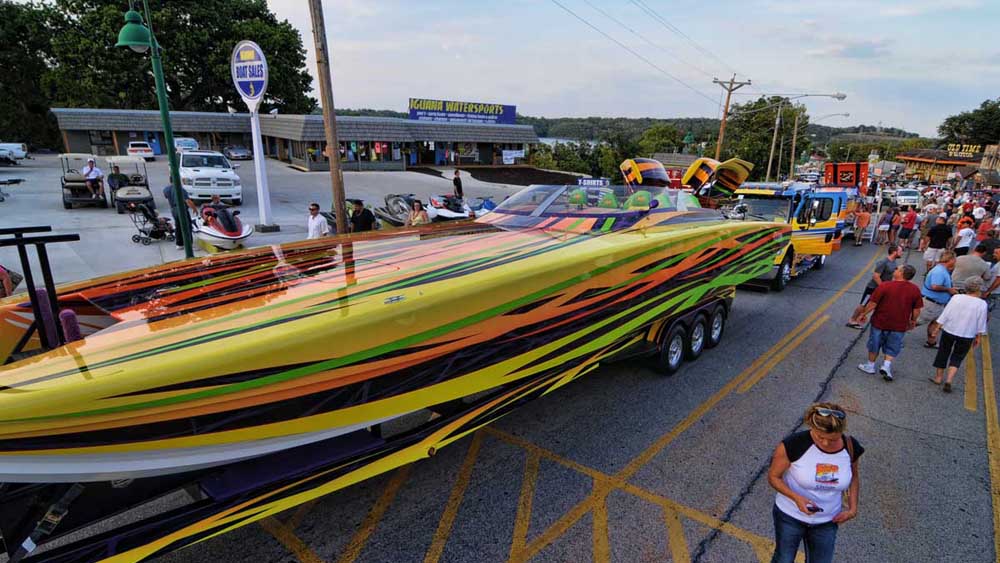 The Street Party on the Wednesday of the Lake of the Ozarks Shootout week is returning to the Bagnell Dam Strip this year. (Photo by Jay Nichols/Naples Image.)

In just eight weeks the spotlight will be on Central Missouri for the 27th annual Lake of the Ozarks Shootout. And while the event’s record-setting 244-mph top speed set last year by the Qatar Team’s turbine-powered 50-foot Mystic Al Adaa’am 96 is unlikely to be challenged (especially with the team suspending its involvement in the sport), that’s a good thing because it means the overall Top Gun trophy is up for grabs.

The Shootout runs on Saturday and Sunday (Aug. 29-30) and powerboat enthusiasts will be in town or glued to their computers, TVs, tablets and more, but the event has grown far beyond the two days of one-mile blasts across the lake near the accommodating Sunrise Beach establishment Captain Ron’s Bar and Grill. In fact, if you’re coming to town this year, you best make plans to be there by Wednesday for the revitalized Street Party on the Strip.

It was announced in April that the event’s popular public showcase would return to the Bagnell Dam Strip after a two-year run as the Street Party in the Park at Laurie Fairgrounds, and several Shootout volunteers have been working diligently to enhance the party. 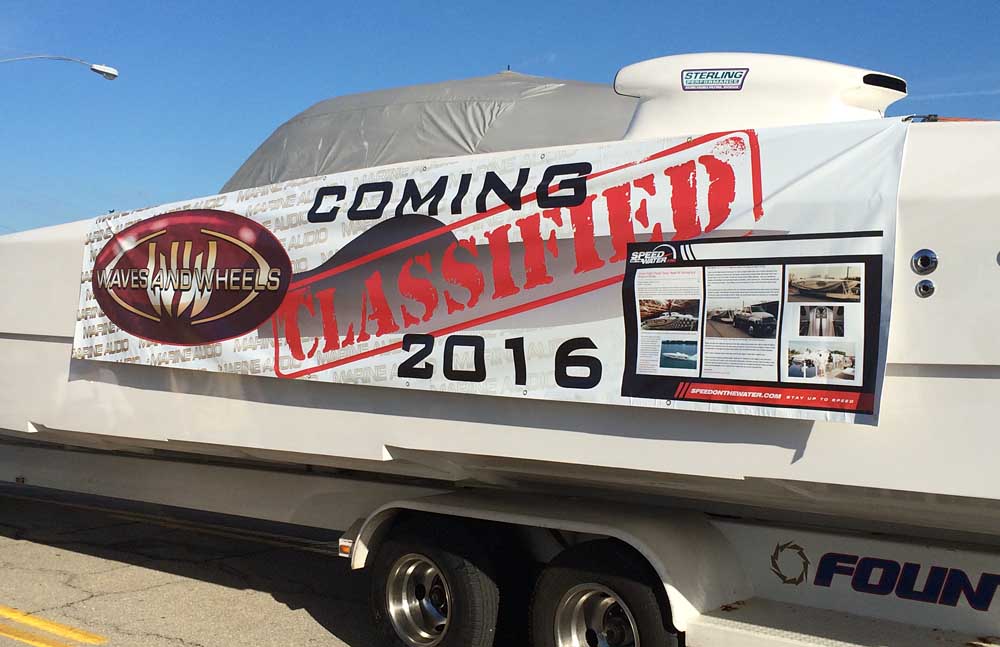 The next Waves and Wheels project boat, a 46-foot Skater, will be on display at the Shootout Street Party on the Strip in late August. (Photo by Justin Wagner.)

One of those volunteers is Justin Wagner, owner of Waves and Wheels in Osage Beach. An outspoken proponent for bringing the event back to Lake Ozarks for the potential the street provides versus the park, Wagner is putting his money—and time—where his mouth is by sponsoring the Wednesday evening festivities (August 26, 5 to 10 p.m.) along Business Highway 54.

He has grand plans to emphasize the “party” in street party starting with a DJ stationed on the deck of the 46-foot Skater Powerboats catamaran he purchased earlier this year. The music will be cranked up a notch or two as Wagner is planning to place at least eight or ten of his customers’ boats (Cigarettes, Fountains, MTIs, etc., and their haulers) in front of and behind the next Waves and Wheels’ project boat and link their audio systems together.

Waves and Wheels is proud to be presenting this year’s Shootout Street Party.

“It’s exciting to be bringing the party back to the strip—it’s not that Laurie Fairgrounds wasn’t a nice place or didn’t do a good job, the event is just better suited for the strip,” said Wagner, who is still organizing Thursday night’s Stereo Shootout at Camden on the Lake Resort like he has for many years. “We want the Shootout to have hands-down the best performance-boat-based street party in the country. There’s probably been a DJ at a street party before, but I don’t know if anyone has ever tied together 100,000 watts worth of boat stereos like we plan to do. We want people to create some memories and have a real good time at our party.”

Wagner said he’s pretty sure he’s going to reveal his plans for the Skater, which was built in 1997 and raced at one time by the legendary Reggie Fountain as the Fountain-Mercury 76 boat (read the story), at some point that evening. As they did with the Hustler Powerboats 377 Talon they converted into an Ironman-themed showpiece, Wagner and his crew have stripped the Skater and are going to start from the ground up—and no, he’s not even sharing any design ideas with his favorite journalist so you can stop asking him what’s in store.

With more time dedicated to the party, this year’s event will be set up similarly to the way it was in 2012, according to Shootout director Ron Duggan, who said he’s attending next weekend’s Grand Lake O’ the Cherokees Shootout (July 10-11) in Oklahoma to support the inaugural event along with members of the Lake of the Ozarks Shootout radar crew and dive teams. Duggan, who expects the party to be a little larger than before, gave a lot of credit to Wagner for being instrumental in getting things organized. 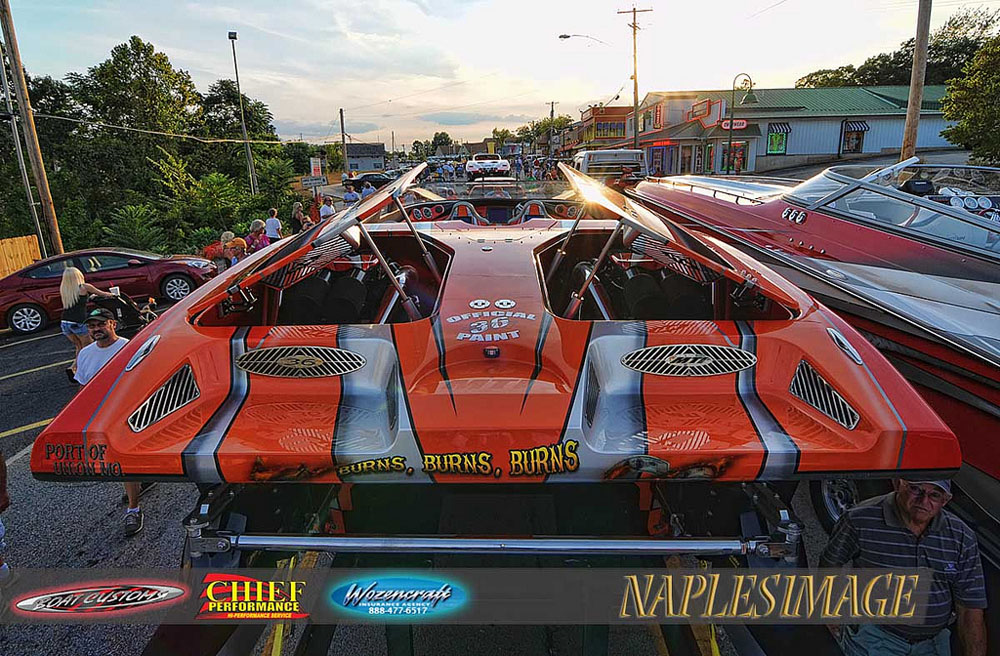 There’s sure to be plenty of MTI catamarans at this year’s Shootout Street Party on the Strip. (Photo by Jay Nichols/Naples Image.)

“Justin certainly shares in the enthusiasm for what we’re doing so we’re happy to be partnering with him for the Street Party on the Strip,” Duggan said. “He’s handled the Stereo Shootout for us for several years now and he’s done a great job. It’s a very popular event. He’s sure to do a great job promoting this and bringing the party to the strip.”

Wagner added that he’s appreciative of his customers who have already said they’re coming to the party because he recognizes the undertaking involved to get the boats cleaned up and in place to be on display for five hours in the middle of Missouri. He’s also appreciative of every person who decides to put their boat on display or bring the family to enjoy the show. He said that if anyone is interested in securing a spot in the Street Party to contact Tiffany Rieman at [email protected].