You are at:Home»LOTO»Shootout, Meet the Sheikh 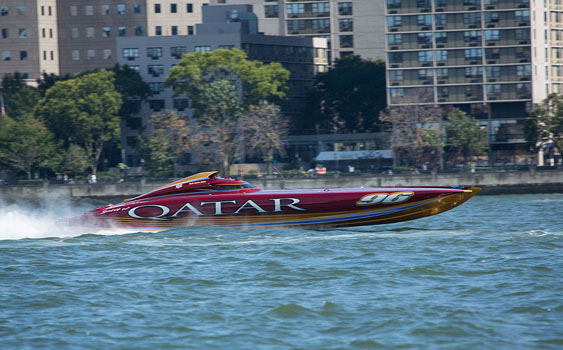 Al Adaa’am 96, the Qatar Team’s turbine-powered Mystic Powerboats catamaran, should command much of the attention at the 2014 Lake of the Ozarks Shootout. (Photo courtesy QMSF.)

As a contributor for the Lake of the Ozarks Shootout program the last couple of years, I’ve gotten to know the editors of LakeExpo.com, a news website serving the community surrounding Missouri’s popular lake. And since LakeExpo.com and speedonthewater.com occasionally share news and images, it was no surprise when one of them asked for an image of Al Adaa’am 96, the Qatar Team’s turbine-powered Mystic Powerboats catamaran.

I instantly wondered if the Qatar Team was coming to the 26th annual Shootout, which takes place August 23-24 with a variety of events all week leading up to the weekend’s speed runs. So I asked Nathan Bechtold and he said he confirmed the news with a team spokesperson and would be posting a story (read it here).

The journalist in me was excited about an international team of its caliber reportedly interested in participating in the Shootout. The fan in me was even more excited to have another turbine-powered Mystic in the fold, especially one with a dedicated organization like the Qatar Marine Sports Federation (QMSF) behind it. 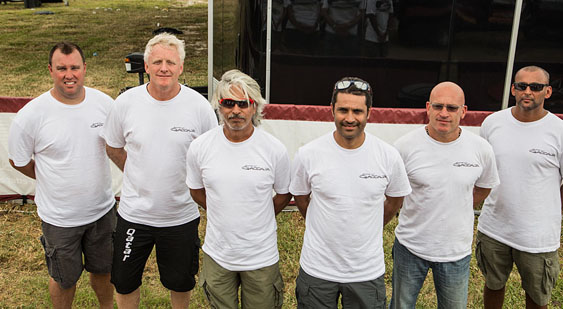 President of the Qatar Marine Sports Federation, Sheikh Hassan bin Jabor Al-Thani (third from left) decided that the Qatar Team will bring its 50-foot Mystic to the Shootout this year. (Photo courtesy QMSF.)

The news was confirmed on Monday morning in a press release from the QMSF—albeit a release that was focused on the team’s efforts with all three of its raceboats heading into this week’s Super Boat International Suncoast Super Boat Grand Prix in Sarasota, Fla.

So, rather than bury the news, why not hype it up? Heck, without the decision by Sheikh Hassan bin Jabor Al-Thani to bring the 50-footer, which will be powered by twin 3,000-hp T-55 engines, to the event, there probably wouldn’t be a boat that could touch 200 mph coming to the Shootout. Not that that’s a terrible thing—Greg Olson’s 192-mph run in a 33-foot Eliminator to win the 2012 Top Gun was one I’ll never forget.

“The Lake of the Ozarks Shootout is something that I have been wanting to enter for some time and it falls at a time in the calendar when we will miss a round of SBI competition,” Hassan said. “However, we have been working hard to ensure that the turbine boat is ready and this will be a great chance for us to see what it is truly capable of.”

Earlier today I reconfirmed with Bill Tomlinson—the Top Gun from 2011 and 2013 in his turbine-powered My Way Mystic—that he’s not planning to run his 50-foot catamaran this year in an effort to break the 224-mph record he set in 2013. And while he won’t say the Qatar Team or another boat can’t break his record, he did say it wouldn’t be easy.

“If the Sheikh and his team are ready to run, I can’t wait to see what they can do,” said Tomlinson, who told me in a previous interview for the feature in this year’s Shootout program that he’s not sure if a faster speed can be reached on the one-mile course.

“It’s one thing to run 200 mph in the boat—210 mph is another thing and every couple of mph after that [changes things]dramatically,” Tomlinson said. “I’m not sure if 230 mph is attainable or not in the Shootout distance. I mean as far as the power and everything else goes, in a good run you could potentially maybe pick up another five mph or so in that distance, but you’re going to have to see how the boat responds to it. It’s pretty dicey; we’re already close to the edge.”

It’s not going to be easy for anyone to top the 224-mph Shootout record set last year by My Way, Bill Tomlinson’s turbine-powered 50-foot Mystic. (Photo by Jay Nichols.)

Ron Duggan, owner of Captain Ron’s and the lead organizer of the Shootout, was happy to hear the news that the Qatar Team was coming to the event. “I think it’ll be fantastic for all the spectators—everyone should be thrilled to see another turbine boat out there,” he added.

Duggan also confirmed that the Shootout has plenty of activities once again—including a couple of new events—so stay tuned for next week’s column on why you need to make plans to be at the 2014 Lake of the Ozarks Shootout.