You are at:Home»LOTO»Super, Duper, Cat Fest 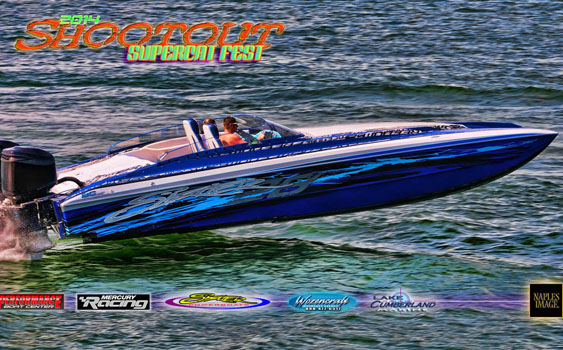 For many reasons, some of which Matt Trulio hit on in yesterday’s excellently-expressed column, 2014 will go down in history as one of the most unforgettable years of the Lake of the Ozarks Shootout. From the tragedy and triumph in the top-speed event to the parties at Captain Ron’s—the location of the Shootout—and the new groundbreaking Performance Boat Center location at Redhead Yacht Club, the 26th annual Shootout surely will be etched into my memory forever.

Adding to the reasons why the event, which is smack dab in the middle of Missouri, was so memorable was the fifth annual Super Cat Fest at what’s arguably the coolest place on the lake—Camden on the Lake Resort. Organized by local performance boat enthusiasts Alvin Heathman and Shane Sherman, the gathering of catamaran-worshipping individuals has turned into an unbelievable show that has taken on a life of its own.

“This was the first year I looked out at the docks and truly was amazed,” said Heathman, who could hardly believe company principals John Cosker (Mystic Powerboats), Dave Hemmingson (DCB Performance Boats), Peter Hledin (Douglas Marine/Skater) and Randy Scism (Marine Technology Inc.) were all gathered in the same place Saturday evening. “The boats were incredible—the cream of the crop in my opinion. There were so many high-powered cats with nice paint jobs. I don’t think I’ve ever seen so much exotic hardware in one place.

“Obviously John Woodruff topped the show this year,” Heathman continued, referring to the owner of Windship—a 48-foot MTI—who had his helicopter “docked” next to his boat. “I’ve got to hand it to Shane [Sherman] and the guys at Summerset Boat Lifts who provided a cat lift last year so our participants had a place to change props and anything else. This year we asked them if they could build a place for John to land his helicopter. All we could do was ask, right? They pulled it off and we handled the other logistics, and next thing you know there was a helicopter at the docks. John told me he was hesitant the first time he landed because the platform felt like it was moving—and then he realized it should be because it was on water.” 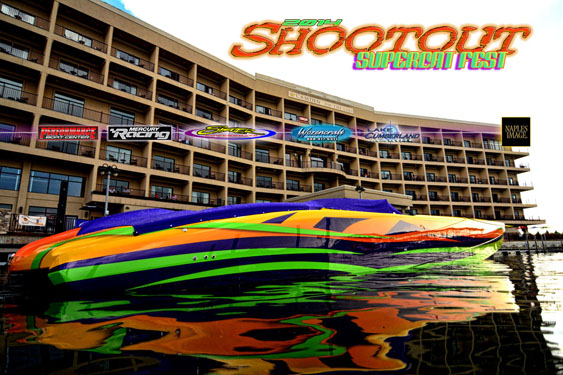 Don Lightfoot’s spectacular 52-foot catamaran from Nor-Tech Hi-Performance Boats was front and center at Camden on the Lake Resort.

Woodruff thoroughly enjoyed bringing his boat to Lake of the Ozarks for the first time.

“Oh man did we have a lot of fun,” said Woodruff, who enjoyed the company of his girlfriend, Nancy, and her three friends, who all had matching bathing suits for three different days. “Shane and the guys at Summerset Boat Lifts wanted to make a statement and they did just that. To be able to land and walk right up to our rooms, which were really nice and looked down at the marina, was a complete privilege.

“We had a great time running up to Big Dick’s Halfway Inn for lunch and hitting the other fun run stops around the lake,” he continued. “We did the raft-up thing to watch the Shootout on Saturday. A lot of people asked me why I didn’t do the Shootout. I just laugh and tell them I don’t have a competitive bone in my body. I also don’t want to put any extra stress on my equipment. Overall it was just really fun. I know there were lots of people complaining that it was too hot. You know what? Personally I’d rather take clothes off than put them on.”

Heathman believes that the laid-back schedule (there’s not much of one besides a couple of evening parties) is why the Super Cat Fest participants have such a good time. He also believes the event does nothing to detract from the Shootout.

“I think our event complements the hell out of the Shootout,” Heathman added. “These guys want to come and go as they please, so we leave the days open and make sure when they get back that there’s a slip waiting for them as well as a chance to socialize and check out the other cool stuff.”

A display of three exotic cars from St. Louis Motorcars added to the flair delivered by this year’s Super Cat Fest, which included boats from 28 feet to 52 feet at the docks and sponsors 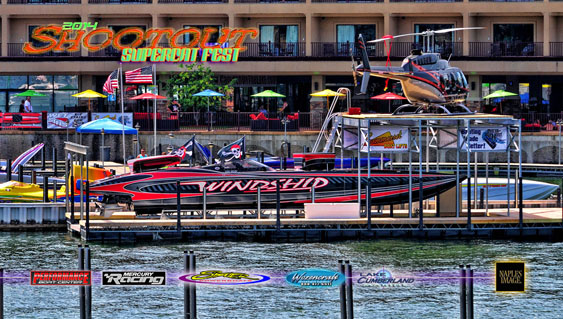 With help from Summerset Boat Lifts, Georgia’s John Woodruff stole the show at Super Cat Fest by displaying his MTI and helicopter together.

“I think Super Cat Fest is a great event,” said Cosker, who enjoyed an incredible weekend thanks to the Spirit of Qatar team’s record-shattering 244-mph run in his company’s 50-foot catamaran. “This was my third year and I think it’s really under utilized by manufacturers. I’d like to see the event become a manufacturer showcase where people can see new product and run the boats on the lake in the rough and calm conditions that LOTO can offer up. We had a 50 there the last two years; unfortunately we didn’t have one this year—we won’t let that happen again.

“Scott Sjogren with Pier 57 and I are planning on having at least a half dozen Mystics at Super Cat Fest next year between the C4000, C5000 and the new V-hull we are coming out with soon,” he continued. “The event is becoming to the Shootout what the Key West Poker Run is to the Key West World Championships.”

It sounds like the sixth annual Super Cat Fest is already shaping up to be a good one.