You are at:Home»LOTO»The True Queen of the Shootout

Southern California performance boater Summer Richardson laid down an impressive 147-mph pass at on Saturday at the Lake of the Ozarks Shootout in Missouri. (Photo by Pete Boden/Shoot 2 Thrill Pix.)

With the entire group of DCB Performance Boats representatives—including her husband, Travis Richardson, and four other DCB customers who brought their M35 Widebody models to Missouri’s Lake of the Ozarks—sitting upstairs at Camden on the Lake Resort eating breakfast on Friday, Summer Richardson went down to the docks, untied her boat, idled over to the gas dock and headed out for a few test runs up and down the lake.

It was Richardson’s first time at the lake and the Queen of the Desert—the title she earned in April after running 143 mph at the Desert Storm Poker Run Shootout in her DCB F32 catamaran with twin 1,050-hp engines from Teague Custom Marine—wanted to get a better feel for the waterway before running in the Lake of the Ozarks Shootout on Saturday.

As stunning as she is talented, Summer Richardson was all smiles showing off her 32-foot DCB in Missouri last week. (Photo by Pete Boden/Shoot 2 Thrill Pix.)

For Richardson, who owns My Garage App with her husband and is the daughter of Don London (a past King of the Desert winner in his 38-foot Skater Powerboats catamaran and former drag boat racer), that was just another day of boating for the 29-year-old California girl who grew up around the sport and motorsports in general.

The next day—Summer’s birthday—the Richardsons drove the boat over to Captain Ron’s in Sunrise Beach, Mo., and she proceeded to take the 32-footer from the docks by herself, idle out among the enormous spectator fleet, wait patiently with the other racers in the start line, radio into the start boat when her number was called and proceed to said start boat on plane at no more than 40 mph, none of which is an easy feat when you’re by yourself.

She then laid down a pass of 135 mph and backed it up shortly thereafter with runs of 146 and 147 mph along the one-mile course to become the 27th annual event’s “all-time fastest women on water,” a title that can be challenged by other women who were driving boats that were throttled by men, including the Sunday run in which Debbie Bull held the wheel while world champion throttleman Randy Scism, the owner of MTI, ran Bob Bull’s 52-foot MTI up to 180 mph (read the story). Offshore racer Lisa Matthews ran 156 mph before with fellow racer Randy Kent and, according to Ron Duggan, Jeff Stevenson and his wife, Jaimee (she wasn’t registered so it wasn’t recognized), ran his turbine-powered JBS Racing Mystic Powerboats catamaran down the course at more than 180 mph in 2010.

But for Richardson to accomplish that by herself was a feat that blew away the previous solo female driver top speed of 80 mph set last year by Tristan Collins, who grew up at Lake of the Ozarks.

“I don’t want to take anything away from other women who have been in a boat that went faster than Summer did this weekend because it still takes guts to get in there, but what Summer accomplished is absolutely incredible—she’s an inspiration to me,” Collins said on Sunday. “It’s not easy to be out there by yourself, trust me I’ve been there. I love that she brought the boat all the way out here to make a point—she wanted to be the fastest woman in Shootout history. And you know what? She did it three times. That is such an amazing accomplishment.” 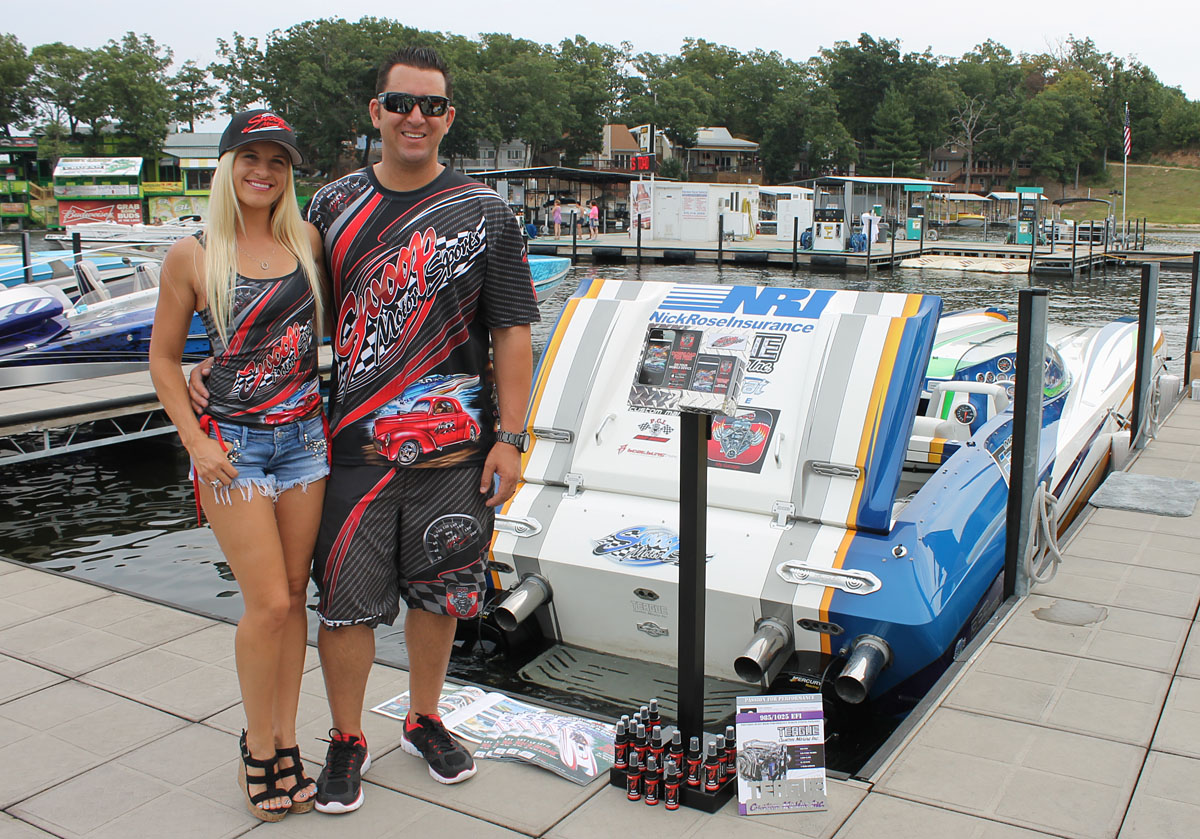 Richardson said she wants to be a promoter and a motivator for more women to get in involved in the sport—or any motorsport for that matter—and have the confidence to run a boat or whatever it is they might be hesitant to try.

“Whenever I see a woman driving a boat, whether it’s with her boyfriend, husband or by herself, I think it’s so awesome,” said Richardson, who has raced in the Desert Storm Shootout the last four years. “Obviously I grew up around the sport and have been running boats for a while, but you don’t need a lot of experience to give this a shot.

“Of course, between my husband—Travis and I make a great team—and the support we had from DCB, My Garage App and all of our other sponsors, I wouldn’t have been able to do it without them,” she continued. “Coming to the Shootout was an amazing experience and a real eye-opener. I will definitely be coming back next year. To be honest, I didn’t have a chance to notice the spectators. I was focused on my goal and so tuned in with my boat that I didn’t notice much else happening at the moment. It wasn’t until after the runs when I was on my way back to the starting point that I noticed how huge the crowd was—I’d never seen anything like that before.”

Although she was a little disappointed she didn’t leave with a trophy for her effort, Richardson was thankful for the experience and the many new friends she met at the lake, including Collins. And while it’s a year away, Richardson is already thinking that she might have to see if her dad, who came to the event to support her and his friend and fellow Skater owner, Gary Smith, would be willing to bring his 190-plus-mph Skater out to the Shootout in 2016 for her—and possibly Collins—to run together.

Now wouldn’t that be something? It would definitely put any “fastest women on water” debates to rest and it could be a pretty fun way to celebrate your 30th birthday.