You are at:Home»LOTO»Viewing The Shootout 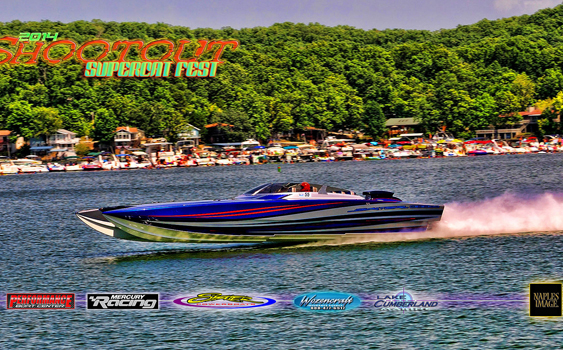 John Tomlinson made three passes in this Skater 388 catamaran during the Lake of the Ozarks Shootout. (Photo by Jay Nichols/Naples Image.)

Near the end of the 2014 Lake of the Ozarks Shootout in Missouri last Sunday, event organizer Ron Duggan paused to absorb the enormity of the events of the past two days. Not that everything that happened during the 26th running of the event could possibly be absorbed and processed in a moment—that will take weeks, maybe even months—but Duggan was a man in desperate need of one long exhale.

Truth was, he hadn’t been on site for the epic 244-mph run laid down the day before in a turbine-powered 50-foot Mystic catamaran by Sheikh Hassan bin Jabor Al-Thani and Steve Curtis. He had been on his way with his wife, Nicole, in their SUV to University Hospital in Columbia, Mo. He caught moments of the historic liquid-mile run on his wife’s smart phone as they headed to visit Mike Fiore, the owner and founder of Outerlimits, who was gravely injured when the 46-foot catamaran he was throttling with driver/owner Joel Begin flipped at more than 150 mph.

Duggan spent the day at the hospital with Fiore’s brother-in-law, Dustin Whipple, and friends.

By late Sunday afternoon, Fiore’s condition had been upgraded from critical to serious but stable—that was the extent of the information his family released to the public—and Duggan was ready to exhale.

Fortunately, Duggan didn’t have to make that call.

Despite a remarkable safety record with thousands of top speed runs and no fatalities in 26 years, the Lake of the Ozarks Shootout—like all top-speed events—is dangerous. That’s so very easy to forget as you watch one outrageously fast run after the next, until something happens. Then the inherent danger of running a powerboat as fast as you can comes back with heart-stopping suddenness.

Those willing to take the risk must know it, calculate it and accept it—or simply deny it. (Human beings can be tricky that way.) That the Shootout happens on a closed course with proper safety crews mitigates some of the risk, but far from eliminates it. Participants do what they can to manage the risk, but it never goes away.

Shootout veteran John Tomlinson knows this as well as anyone. He made three runs last weekend in a 38-foot Skater catamaran with more than 3,000-hp. He was hoping to break 200 mph. After his second 197-mph pass, which was mildly interrupted by a breeze, he was done.

“We thought it was best to park it,” he said, as he drove to the airport to catch his flight back to Miami.

As a journalist you do your best to be dispassionate and objective with event coverage, knowing of course that, as a human being, absolute dispassion and pure objectivity aren’t possible, especially in events where friends are involved. So like Duggan, I haven’t completely absorbed or processed the events of last weekend.