You are at:Home»LOTO»What’s New With The Shootout

Not only will Captain Ron’s be the place to be for Saturday and Sunday’s Lake of the Ozarks Shootout top speed runs, but the restaurant in Sunrise Beach, Mo., will be the final stop for Friday’s poker run.

In last week’s column, I wrote about some good news regarding the Qatar Team’s commitment to this year’s 26th annual Lake of the Ozarks Shootout in Missouri. After last year’s record-setting 224-mph top speed by Bill Tomlinson and Ken Kehoe in My Way, it was great to find out that there will be another potential 200-plus-mph boat in the mix this year as Al Adaa’am 96, the Qatar Team’s turbine-powered Mystic Powerboats catamaran, is expected to participate in one of the country’s most popular performance boating events in late August.

But, as anyone who has been to the Shootout can attest, the event isn’t just about the Top Gun winner or Saturday and Sunday’s top speed runs in general. It’s about having fun on and off the massive lake no matter what kind of boat you own. And that’s exactly why the event, which technically runs from August 16-24 with tons of activities on the lake, is adding the Lil Boat and Pontoon Poker Run on Tuesday, August 19.

Ron Duggan, owner of Captain Ron’s and the lead organizer of the Shootout, said he’s excited about the addition of the Lil Boat and Pontoon Poker Run presented by Border X’Pressions. The run, which is only for boats 32 feet and under, features a unique “dual start” format as boats will sign in and start at either end of the lake (at Captain Ron’s and Momma’s Market) and make their way to the finish in the middle of the lake at Topsider.

Duggan confirmed that the Shootout in the Park will return to Laurie Fairgrounds on Wednesday from noon to 10 p.m. Sponsored by Performance Boat Center, the street party-style event is expected to be bigger and better than last year’s first go-around on the fairgrounds property. According to Tiffany Riemann, who heads up the event for the Shootout committee, there will be improvements made to the event, including better lighting, entrance widening and overnight security. 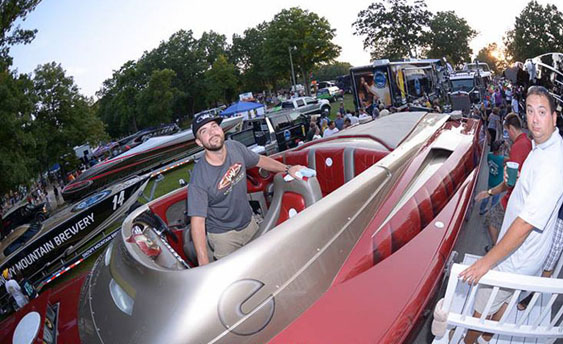 Justin Wagner and the crew from Waves and Wheels are planning to attend the Shootout in the Park again with the company’s stunning Ironman-themed Hustler Powerboats catamaran. (Photo courtesy of George Denny/LakeOzarkRacing.com.)

In another slight change, Friday’s poker run will finish at Captain Ron’s. Normally the lunch stop for the run, the restaurant will host the dinner and party, which will include the Shootout’s live and silent auctions, which are usually held Thursday evening at Captain Ron’s.

“We’re hoping to get more people involved with the auction this year by holding it after the poker run,” Duggan said. “All of the money we raise goes to support local fire departments and charities around the lake. We’re still looking for auction items, too, if anyone wants to contribute something to the fundraising efforts.” 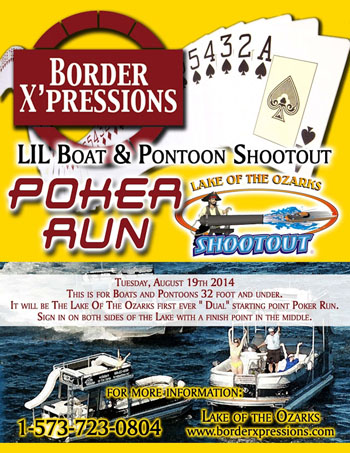 New to the week of Shootout activities this year is the Lil Boat and Pontoon Poker Run for boats 32 feet and under.

Although no names have been announced, Duggan said another Bob Morgan Memorial Shootout Hall of Fame induction ceremony is taking place on Thursday evening at the Stables at Cannon Smoked Saloon. He’s expecting to induct around a half dozen members into the Hall of Fame, which was started last year in conjunction with the event’s 25th anniversary.

For more information, be sure to check out the full schedule of events for this year’s Shootout. And don’t worry, if you can’t make it to the Shootout, you can catch all of the weekend’s racing via the KRMS broadcast online and read all about it in the complete coverage provided by myself and my partner Matt Trulio on speedonthewater.com.

On a side note, this will be the first year in many that I won’t be able to visit with Steve Tripp, the founder of Revolution Performance Marine (RPM Powerboats) in Alabama. Although I wrote a tribute to Tripp for this year’s Lake of the Ozarks Shootout program, which should be out soon, I sure hope Shootout organizers do something special to honor Tripp, who died in a boating accident in February.