You are at:Home»Maintenance»How Old is Too Old? 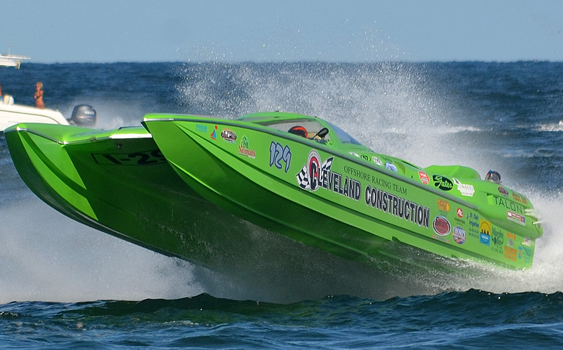 Ed Smith owns the 1995 37’ Talon, Cleveland Construction. Original owner Steve Neeley won a national championship in the boat in the Modified class in the late 1990s. (Photo by Lucididee.)

A couple of months ago, OffshoreOnly.com contributor Bob Brown wrote a great article about performance-boat noise, asking when is loud too loud. It got me thinking about a question I’ve had when it comes to offshore racing boats for the last couple of years. How old is too old?

I got the idea while scrolling through pictures from all the photographers who attend the races and are gracious enough to post on this forum. I covered many of these boats when I was Editor at Powerboat magazine in the late 1990s and I couldn’t help but wonder about just how much abuse some of these boats have taken through the years. Is there, literally, a breaking point? In the first half of this two-part series, we’ll focus on the hulls and decks. In Part Two, we’ll discuss canopies and cockpits.

Ed Smith, 57, of St. Clair, Mich., owns the 1995 37’ Talon, Cleveland Construction. Original owner Steve Neeley of San Diego won a national championship in the boat in the Modified class in the late 1990s, regularly running speeds pushing 130 mph. Smith and his son Shawn, 34, race in a class limited to a top speed of 117 mph so they feel that they are putting less stress on the hull.

“I see newer boats that are lighter and are already cracking,” said Smith. A veteran of the sport and of the marine industry, Smith owns River’s Bend Marina in St. Clair and explained, “We have crawled through this boat from bow to stern.” The boat has a 2” thick Airex foam core in the bottom, 1” thick in the hullsides and ¾” in the deck. He and his son Shawn, 34, have flipped or rolled the boat twice and have emerged from the accidents unscathed.

“When we [bought]this boat three years ago, we collided with [the 42’ Fountain]Global Warmer, went up into the air at 115 mph and went from 115 to zero in a flat spin,” explained Smith. He said that they replaced a 13’ section on the forward end of the sponson, but that even in both accidents, the hull bottom remained free of cracks.

Not surprisingly, manufacturers and composites experts aren’t as confident about racers running older boats, but all the builders I spoke to said that there is no magic formula when it comes to deciding to retire a hull. One guy might break a new boat in its second race while another can comfortably get 10 years out of a hull.

Peter Hledin, president of Douglas Marine, isn’t concerned about the Bull On The Beach team racing the 1992 Skater 32 that formerly ran as How Sweet It Is. He said the biggest concern would be the core separating from the laminate, but that you can see that easily with a visual inspection.

Marine Technologies Inc. president Randy Scism said that the best way to evaluate the health of a boat’s laminate is to take a screwdriver handle and tap it against the hull, sides and deck. “You’ll hear it where it’s not solid,” said Scism.

Mystic powerboats president John Cosker said that he checks the areas of the hull that slam hardest on the water during a race. He pays close attention to the bottom one third of the way down the front sponsons and to the aft running surface on high-speed boats. Look for the core dimpling through the gelcoat or paint. He said that he would expect a 10-year-old raceboat that’s been run hard to show its age.

Richard Akers is president of Maine Marine Composites in Portland, Maine, and he has consulted to many of the big names in performance boating. He explained that the theories used to mathematically determine the life of a steel or aluminum hull can’t be used on fiberglass or composite hulls. “The problem is that fiberglass hides a lot of faults,” said Akers. “If it’s a 20-year-old cored boat, you shouldn’t race it period.” He said that the only accurate way to check a core to make sure it isn’t wet is to drill into the bottom of the boat.

Super Boat International president John Carbonell said that his organization has technical rules to which boats must comply and that his inspectors would disqualify a boat if they did not deem it to be seaworthy. One rule is that all boats with rudders must provide SBI with a positive result of a magnaflux test for the accessory. To date, SBI has not disqualified a boat from competing after a technical inspection.

For Smith, whose boat actually sat for a couple of years and is always stored indoors when he’s not racing, it’s all about being comfortable and he’s perfectly happy in his 17-year-old boat. “I feel safer in that boat than in a lighter boat,” said Smith.