At one point in the days leading up to the Miami International Boat Show, it looked as if TNT Custom Marine’s John Tomlinson and I would be running a few boats on the Tuesday prior to the boat show. While it didn’t work out that way in the end, we still got to test-drive a new MTI 340X catamaran—the Mercury Racing-owned model powered by a pair of the Fond du Lac, Wis., company’s new 300R engines. 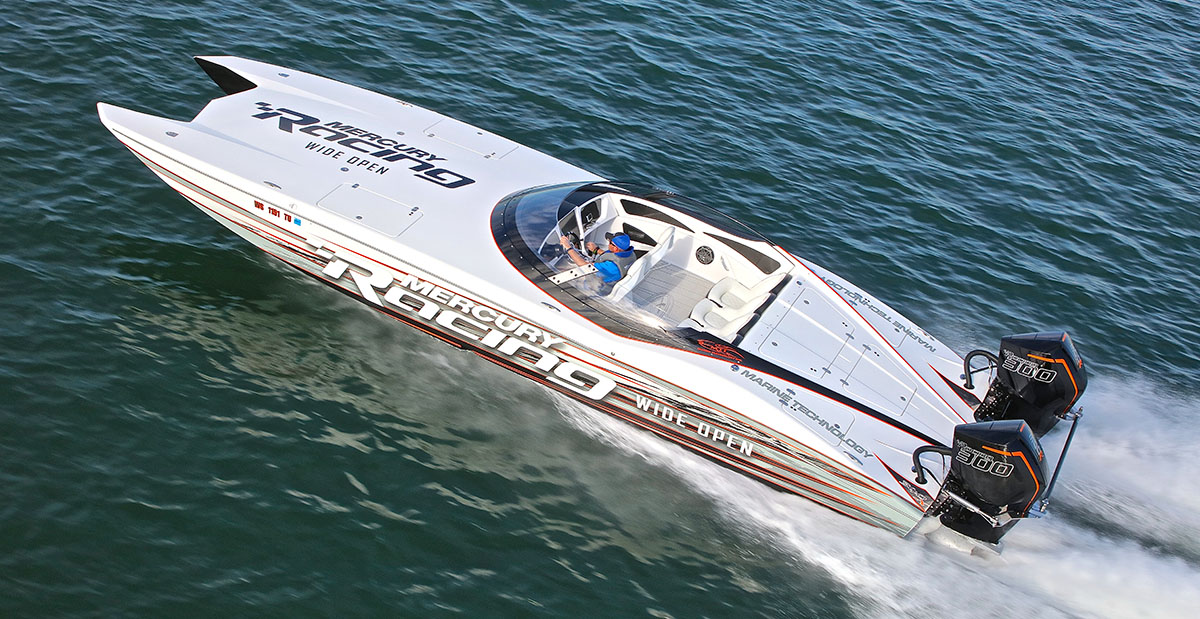 The boat, which has been written about on speedonthewater.com and was available for a media demo day in early February on Mercury’s Lake X in Osceola County, Fla., was the first sport catamaran to be equipped with the 4.6-liter V-8 outboard engine platform. It also was the first time Tomlinson had driven a boat with the new naturally aspirated V-8s.

As expected, the world champion offshore racing throttleman was impressed with the overall performance of the boat, which has reached a respectable top speed of 113 mph according to its GPS. In contrast, the fastest the Wentzville, Mo., company has had one of its 34-foot cats with a pair of stock Mercury Racing Verado 400R engines is 123 mph. Tomlinson and I found some decent water in the north part of Biscayne Bay and had fun gathering numbers on the 340X to compare to the boat we tested in August on Missouri’s Lake of the Ozarks during the Speedonthewater.com Mercury Racing Verado 400R Sport Cat Roundup.

Powered by the twin 300-hp engines, which Tomlinson was impressed with, the new 340X reached a top speed of 107 mph in breezy and bumpy conditions on the bay without pushing it too hard. Obviously we knew how well the boat handled and performed after running in a few 34-footers the company had built the past couple of years—what we really wanted to see was how well the boat accelerated versus the twin 400R-powered version. 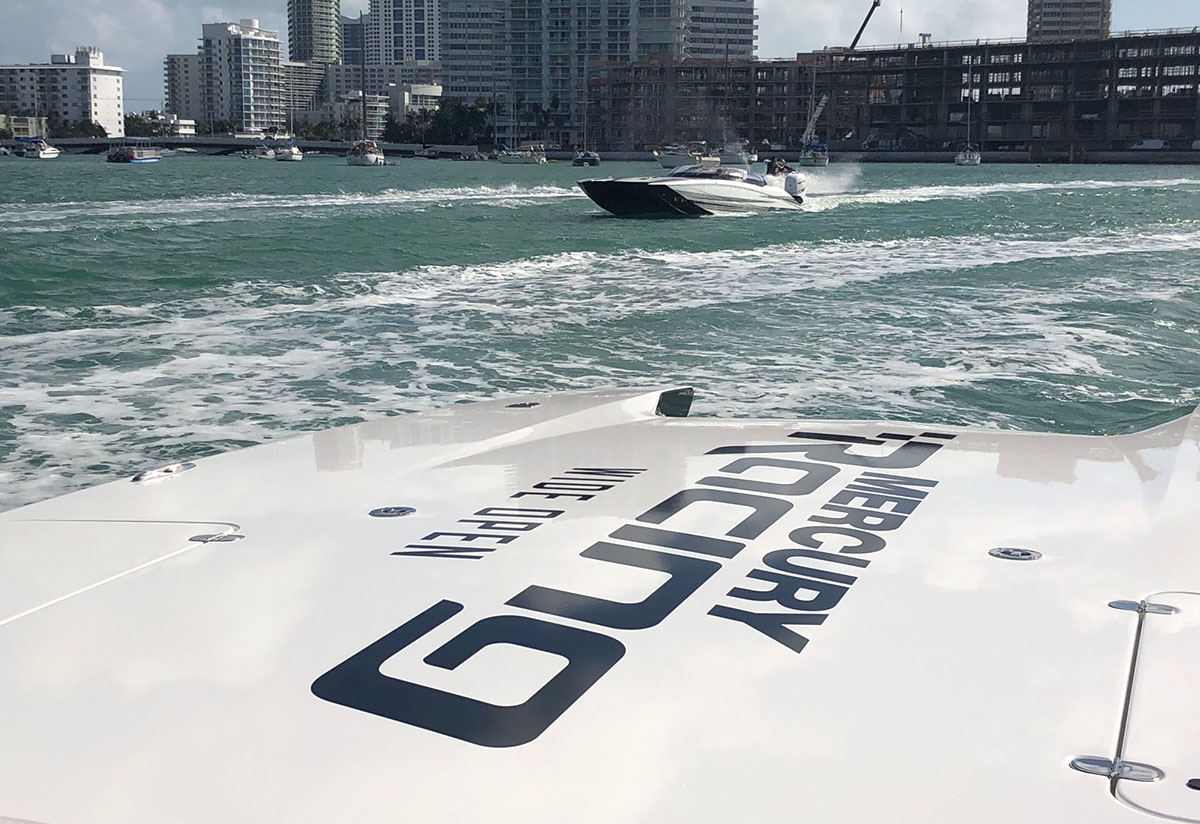 Overall, the 300R-powered 340X was not too far off of the model we tested in August, which reached a 121-mph top speed during the roundup. The water conditions, temperature, elevation and more made for an inexact comparison, but it’s as good as it gets for now so it’s still fun to compare.

“This 300 boat romps—it’s very impressive,” Tomlinson said. “The throttle response is great and I like the throaty sound of the engines. This is a fun boat to drive. I feel like you can run it hard all day long. It eats up the chop and powers through turns with ease. In fact, I think it feels better balanced than a 400R boat does. The new engines are lighter so that definitely helps. To me it doesn’t feel like you’re running a boat with 300s. I think Mercury has a winner with this engine.”

As you can see, none of those numbers are too far off considering the overall horsepower difference. Time to plane was even faster in the 300R boat as it rolled right on plane in less than 3 seconds compared to the 400R version, which reached plane 1.5 seconds later. 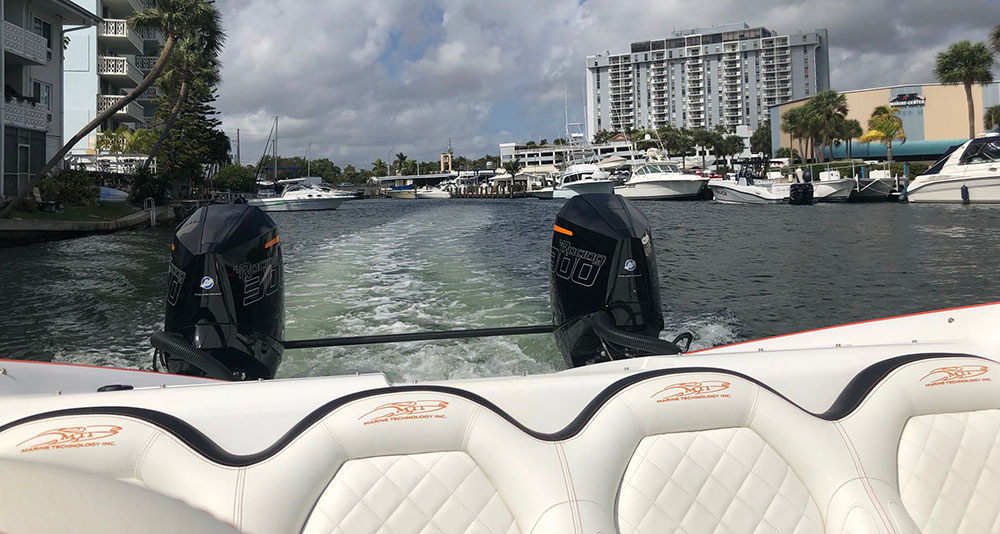 The pair of Mercury Racing 300R engines packed quite a punch during an evaluation of the company’s MTI 340X test platform.

Overall, we were pleased that the MTI 340X didn’t lose one bit of its sportiness and fun factor with Mercury’s new naturally aspirated V-8s mounted on the transom. Yes it is a good 10 mph or so slower on the top-end, but that’s what an extra 200 hp is going to get you. The ultimate question is whether the overall price of the boat—or boats from other manufacturers—is going to be that much different to make someone choose the 300Rs over the 400Rs. For now, that is a question left to be answered by the buyer.

For me, I was just glad to get some seat time in the Mercury test platform. Running a boat with Tomlinson is always a treat. Plus, my day got even better thanks to Mercury Racing’s Nick Nida. During a ride to Miami Marine Stadium with Nida following our evaluation, we enjoyed the boat’s premium sound system, watched a guy wipe out on an electric-powered surfboard and caught a glimpse of the new MTI demo 340X being driven by MTI’s Tim Gallagher. I even got an early peek at the show since Nida was dropping off the boat in the slip where it would be on display for the rest of the week.