Early last summer I wrote a column on how busy the team at Marine Technology Inc. was with its deliveries (read it here). Six months later, the Wentzville, Mo., company is still at it. A peek at the schedule of Tim Gallagher—MTI’s sales and marketing manager—over the past two weeks—a time when many people step away from work—proves it.

On the same day, Gallagher delivered another pre-owned boat—the 44-foot Mayhem catamaran powered by twin Mercury Racing 1100 engines— to Mark Kozik of Pennsylvania, who also opted to run his boat in the FMO fun run and had a blast. 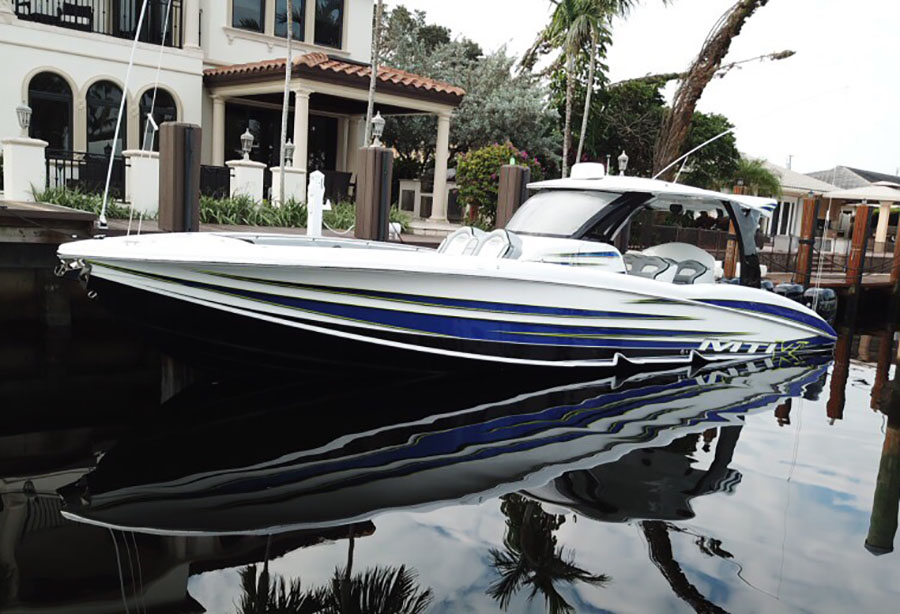 The day after delivering Kozik’s and Walker’s boats, Gallagher hooked up well-known New Jersey performance boater Bob Christie’s new 340X and trailered it across the state to Christie’s second home in Sarasota (read the story).

From there, Gallagher drove down to Fort Myers to prep Eric Belisle and Doug Comrie’s new 48-foot catamaran to go in the water Friday morning.

“Friday was delivery day for Doug and Eric on their new 48,” Gallagher said. “We ran all throughout the Fort Myers and Boca Grande area to get some time on the 1100s before the FMO New Years Day Fun Run on Saturday.

“The crew from our Miami location also trailered Kozik’s 44, Walker’s 340X and Ron Schwartz’s 340X from Miami to Fort Myers for the event,” he continued. “The event was a bit on the rough side, but all went well and all of the MTIs finished the run without any issues. We were happy to see these owners enjoy their new MTIs and it was great to have Ron leave his familiar Miami waters and head west with us for a change of venue.”

The full-throttle effort from Gallagher and the MTI team isn’t ending anytime soon either, as the Miami International Boat Show is just six weeks away and they are busy prepping a new MTI-V 57 as well as several catamarans and center consoles, one of which is expected to be part of the Mercury Racing booth. Good luck guys.