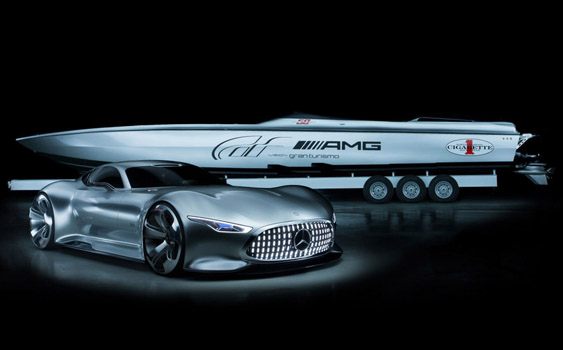 Let’s get my one “low” from last week’s Miami International Boat Show out of the way right now. While the final numbers from the National Marine Manufacturers Association aren’t in, from what I could see—and from what most exhibitors told me—traffic was light at this year’s event. That makes sense, given the record number of weather-related flight cancellations so far this winter, which translated to something on the order of 14,000 scrubbed flights last week. Obviously, not all of those flights were headed to Miami, but if you were flying from the Northeast or Midwest to the Sunshine State last Wednesday it was, pardon the pun, tough sledding.

“I knew that if I left the airport I’d never get here,” said Joe Nasso, chairman of Shore Dreams for Kids, who comes to the Miami event every year to catch the show and hang out with his fellow New Jersey performance-boat owners. “So I was in the airport for 24 hours before I finally got on a flight, and I was on the stand-by list.”

That’s what I call dedication. Or obsession. But what awaited Nasso and other Miami Boat Show visitors was a stellar array of go-fast boat hardware. And as it happened, the three most spectacular pieces—my top three anyway—were accompanied by cars.

Paired with a Mercedes-Benz AMG Vision Gran Turismo Concept car with a 577-hp V-8 engine, Cigarette Racing Team’s 50′ Vision GT Concept Marauder V-bottom powered by twin Mercury Racing quad-overhead cam, 1,650-hp turbocharged engines was a pure knockout. Everyone seems to have an opinion—and not all of them informed—on Cigarette’s relationship with Mercedes-Benz AMG, but one thing is for sure: It has resulted in some spectacular boat-and-car-unveilings at the Miami Boat Show in recent years. 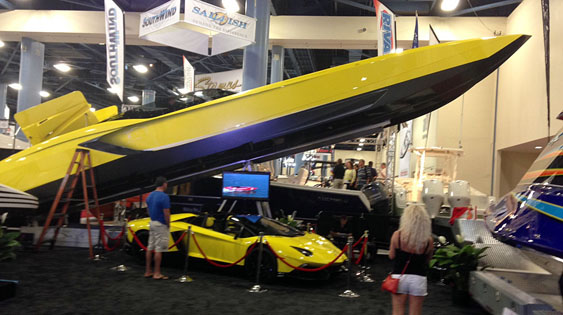 On the catamaran side of things, Marine Technology, Inc., stole the show with Gino Gargiulo’s yellow 48-footer next to the 50th anniversary edition Lamborghini that inspired it.

On the catamaran side of things, Marine Technology, Inc., stole the show with Gino Gargiulo’s yellow 48-footer next to the 50th anniversary edition Lamborghini that inspired it. The former owner of a well-known Mercedes 48-foot MTI cat, Gargiulo is no stranger to exotic car theme boats.

“I’ve wanted to do a Lambo boat for years and getting this new special edition car was the inspiration,” said Gargiulo. “It’s really cool to have the car on display with it. There wasn’t room for the car and the boat, so MYCO built that crazy lift for us—it’s a cool feature for sure. You can pretty much see the boat from everywhere in the convention center.” 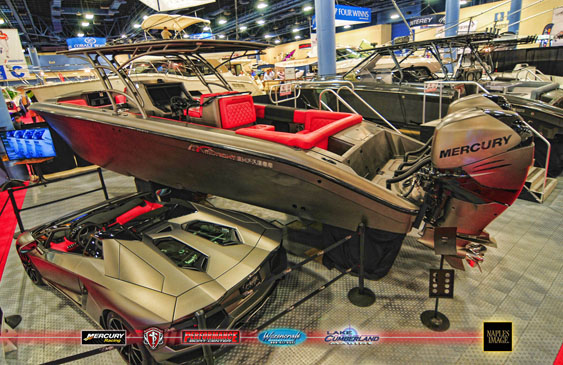 With the center-console buying trend still hot among performance-boat owners, it was only natural that an upscale builder—Midnight Express to be exact—would showcase something over the top in Miami. And the Hollywood, Fla., builder didn’t disappoint with its new sexy 39S with an equally sexy and color-matched Lamborghini. The combination was jaw dropping, and with quad 300-hp Mercury Marine Verado outboards on the transom the boat reportedly tops 85 mph, making it the fastest center console on the market.

Tomorrow night I fly the red-eye back to Miami for the Florida Powerboat Club’s annual Miami Boat Show Poker Run. Seeing as I’m based in California and I’m flying nonstop, I think I have an excellent chance of getting there. During the run—I have the privilege of doing Miami-to-Key Largo in MTI’s 42 V center console and the Key Largo-to-Islamorada leg in Pass Blocker, Brad Benson’s canopied 52-foot MTI cat—I expect to see some spectacular hardware on the water. It’s the “show after the show,” and I can’t wait. Look for a report in next week’s column.