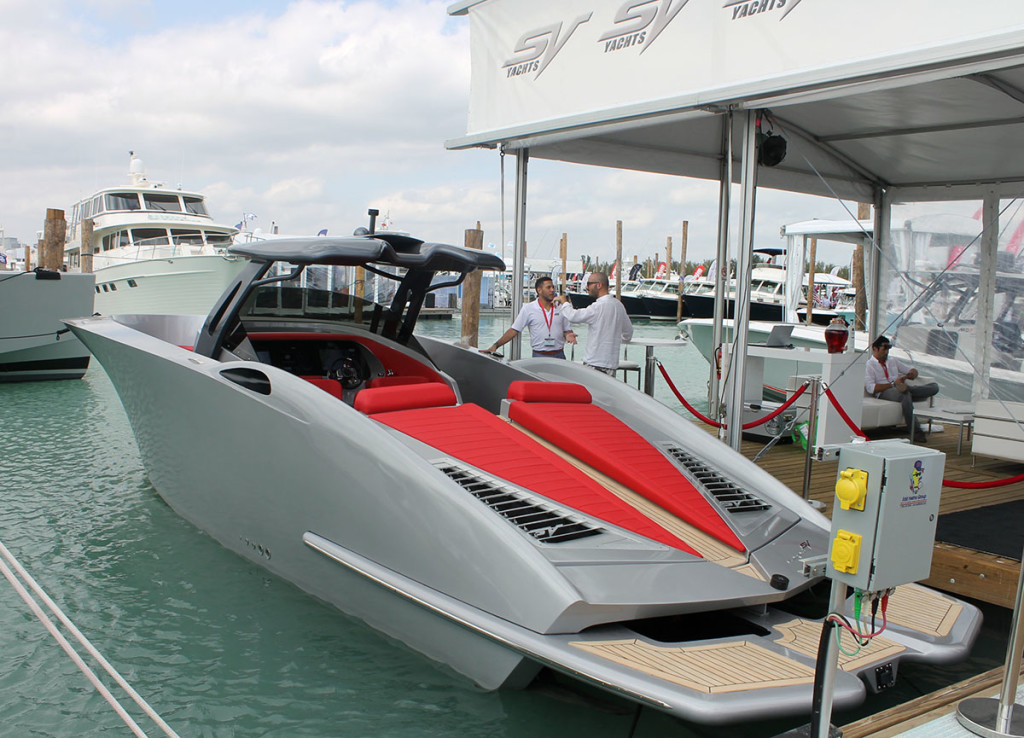 The all-new ALPHA from SV Yachts stood out at the docks of Miami Marine Stadium Park and Basin. Photo by Jason Johnson

By most, if not all, accounts, this year’s Miami International Boat Show, the second at Miami Marine Stadium Park and Basin, was a great success. The reason to me is simple: captivating products. Groundbreaking, jaw-dropping, incredibly unique boats, engines, accessories and more. For me, and no offense to the ever-improving power plants from Mercury Racing or the significance of the striking 50’ Marauder celebrating the 10th anniversary of the Cigarette Racing Team/Mercedes-AMG relationship, what catches my attention are the most unique things, the products I’m not used to seeing.

Stuff like the gigantic MTI-V 57 with four Seven Marine 627-hp outboard engines blew me away with its incredible detail. Or there was the first outboard-powered sportboat from Outerlimits Offshore Powerboats — the SL 41 with quad Mercury Racing Verado 400R engines — that I saw run beautifully with the Miami skyline behind it and my first in-person sighting of the impressive Formula Boats 430 SSC that is also powered by 400-hp Verados. I have two words for both: So cool.

The intriguing 16-cylinder engine dubbed Sixteen Power, from a group of individuals who have been around the industry for a long time was definitely, was something you don’t see every day. Neither was the new stepped trim tabs being showcased by the team at Livorsi Marine. In trying to organize this column, I landed on three things that I had to share from my list of most unique boat show sightings. 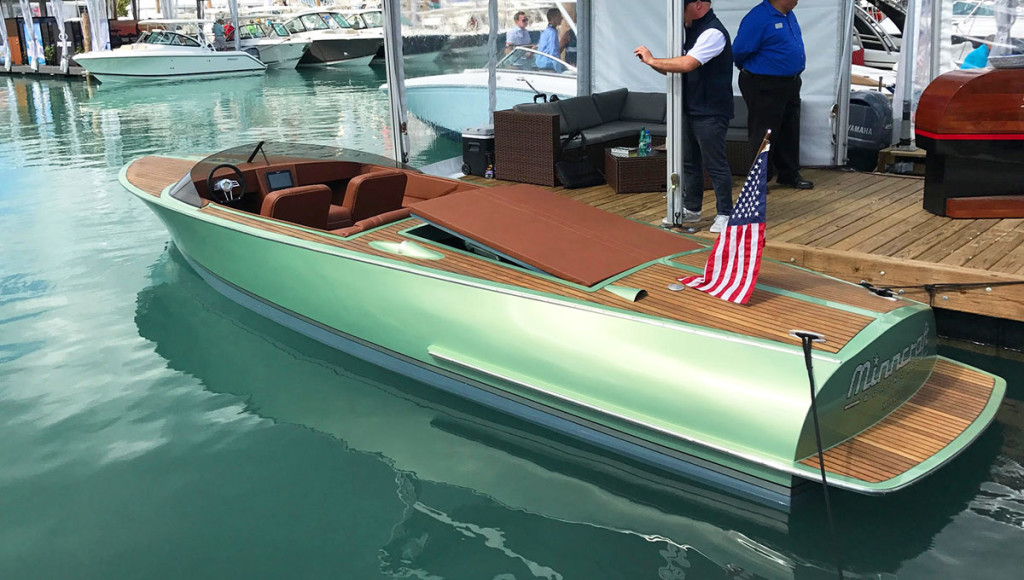 First was the classically styled Minncraft Boatworks Summit 26 wooden runabout and its head-turning appearance thanks to Alexseal’s Luna Green Metallic paint, custom metal work and hand-laid teak top layer. The boat, which was designed and built by Rob Sheppard in the Miami area, includes a hand-planked wood composite hull with white oak frames, cold molded bottom and sides with a solid mahogany and teak top layer finished with fiberglass encapsulation, and a blueprinted bottom.

The first 26-footer from Minncraft is powered by a MerCruiser 5.7L 330-hp engine with a Borg Warner direct drive 1:1 transmission, a four-blade propeller and bronze rudder with “no feedback steering.” It really was a remarkable boat.

Another boat that was one of a kind and packed with plenty of power was the flagship vessel of another Miami-based company, SV Yachts. Dubbed ALPHA, the 27-foot V-bottom was engineered and designed to fuse luxury and comfort with uncompromising performance, according to Mauricio Antonio Velez, owner/partner of SV Yachts.

“We borrowed from the aesthetics of our dream boats from the 1960s and combined them with modern comforts and technology to set the ALPHA apart from the rest,” said Velez, who partnered with Nikolai Sass to form SV Yachts in 2015 with the pursuit of fine craftsmanship and velocity in mind.

Boasting a top speed above 90 mph with twin Mercury Racing 700SCi engines and a specialized tie bar assembly from Latham Marine, the ALPHA did an excellent job blending a European design flair with state-of-the-art technology and electronics. 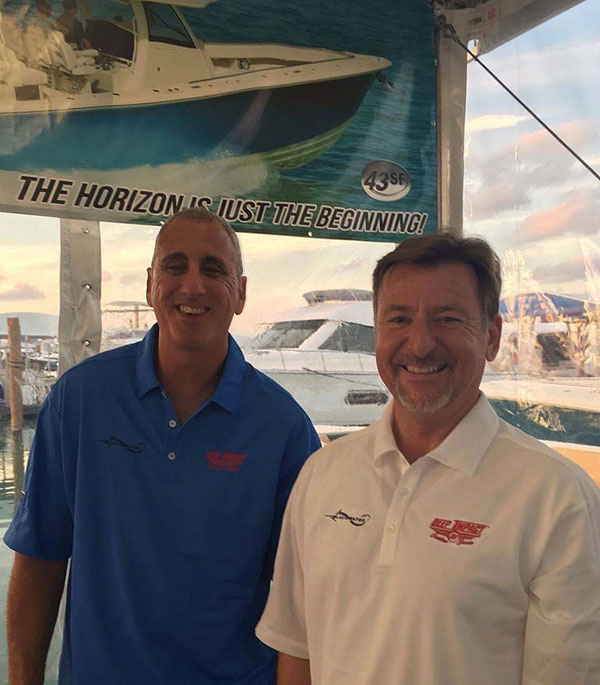 Terry Sobo and Ron McLean, the head of customer service for Blackwater and Deep Impact, had a great showing in Miami this year.

In the end, I’d have to say the most unique thing I saw was my friend Terry Sobo sporting a shirt that didn’t say Nor-Tech Hi-Performance Boats on the front of it. Sorry Terry, I couldn’t resist.

Joking aside it was great to see Sobo’s renewed enthusiasm as he bounced from demo rides in the new 43-foot Blackwater Boats and 39-foot Deep Impact Boats models to the company’s booth just down the docks and to the rest room and back.

“Truth be told, I didn’t get to see much else at the show besides our displays because we were so busy,” said Sobo, who boasted that it was his 25th Miami show. “Everything felt similar yet different because I’m still learning about these brands. The response to the new Blackwater was incredible—people were pretty blown away by it. Overall I was pleased with how everything went. I was a little nervous switching brands but I have no doubt I made the right decision.”