Gary Stray: “My father always taught me, ‘Use your ears more than your mouth and you’ll go far.’”

Since I first met Stray back in the early 2000s after he’d just completed the 44-foot MTI Speed Racer theme catamaran—it’s fair to say that with Speed Racer, Dirty Duck, Mercedes, Looney Tunes and several other MTI creations Stray led the theme-boat movement through the early to late 2000s—I’ve wanted to interview him. Last month while I was at the Miss GEICO shop researching a story for the upcoming July/August issue of Speed On The Water magazine, I got my chance. Stray and I chatted for so long that the rest of Miss GEICO crew was ready to mutiny—the boat was headed for its first sea trial with its new Mercury Racing 1650 engines and the team members needed their leader to answer their questions, not mine.

How did you get into offshore racing?

I started with Cougar Marine in England—that’s how I got to know my friend Steve Curtis. We worked together and I always kind of looked up to him. I was in college and I studied physics and electronics. I wanted to go into the Air Force, but then I got hooked on boats. In 1990, I got the chance to go with Steve and work on the Lamborghini race team that season. That was the last of it.

What drew you to the sport?

I played soccer at a very high standard in England. At one time, I signed on with a professional team. I always dreamed of being a footballer, but that didn’t work out. I always had that competitiveness in me, and it was really drilled into me from the time I was four years old and started playing soccer. The competitiveness, that’s what attracted me to racing.

I did. It was Randy [Scism, the founder and owner of MTI] who called me. They had heard I was quite good at what I do in my level of enthusiasm, attention to detail on the rigging and crewing sides, understanding how a boat works, understanding how propellers work and so on. My father always taught me, “Use your ears more than your mouth and you’ll go far.” I did that at Cougar and I did that with the Victory team. I listened to a lot of people. I still do listen to everybody so I can understand what they’re telling me and deduce the sense from the nonsense.

Before I came to the Victory team, they didn’t have guys there who would rig the boats from the ground up. They would fly in guys from America to do the job. I think they wanted me because I could rig the boats from the ground up. In 1994 we won the world championship. That’s where Randy and I got to know each quite well, and had mutual respect for each other. 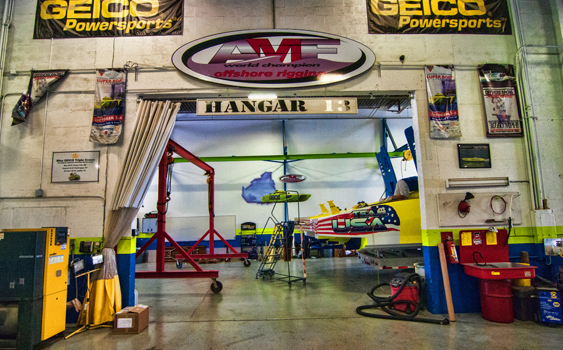 A look inside the Miss GEICO Offshore Racing shop.

What are the keys to managing a successful race team and rigging shop?

Communication and organization. I learned a lot from Gianfranco Venturelli when he came to manage the Victory team. He would have these weekly itineraries that were broken down to what each team member would be doing not just for the week, but hour by hour. Venturelli was the best team manager I have ever worked for. Communication is about everyone knowing what this guy is going to do and that guy is going to do so you’re all on the same page. Venturelli was great at that, and I learned at him.

When we have meetings here, everyone is included, even the 18-year-old kid who sweeps the floors. He comes to the meetings because he’s part of the team.

Is that a change from what you found when you started with the team?

Yes. When I got here it was very segmented. There were truckers/transportation guys and boat guys and parts guys, and the guys in each group wouldn’t take to one another. I tried to get rid of all that. And I think we have. When we have meetings, everyone comes in and sits down and discusses each project. We talk about what the goals are and what each of us is going to do for the team to reach those goals. When you leave our meetings, you realize that everybody is focused on the same goal.

You reportedly implemented changes in the setup for the raceboat not long after you joined the team. What did you do?

When I first came to the team, we went for a test session one week before the Worlds in Key West. The guys, Marc Granet and Scotty Begovich, were scared to death of the boat blowing over so they had 400 pounds of ballast in the front of the boat. Right away, Marc asked me, “What are you going to change?” I said, “I don’t know. Let’s see how the team works and the boat runs.”

After a week of testing, I told them I’d like to take the 400 pounds up front and put it in the tail. They were like, “Oh no. No way.” Everybody has this idea to put weight up front and then trim out the boat to get it to run. They think it’s a safety factor. But what happens is, now when you hit a wave you have this massive momentum arm. What you have to do is use power to trim the boat. When you feel the bow coming up, you push the throttle forward. That creates weight in the back and pushes down the nose. That’s an aspect of setup I believe a lot of people get wrong. These guys, when I first got here, would have sworn against it. Now they wouldn’t get in a boat any other way.

Any other major changes to the Miss GEICO team since you arrived?

One thing we did this year that I see as a big improvement: We used to have some very high-end and highly paid individuals, who were very good at what they do, working here. Those people are gone now—they’re not here. Now we have a younger group of people with a little less experience, and it’s like having my brain with an extension of four or five pairs of hands. But it’s more than that.

I feel like this year we have a great group of guys who care about each other. They have each other’s backs. On a team, it doesn’t matter how good you are at your job if you don’t care about your co-workers—that’s huge for any team. I haven’t seen my wife, Louise, for dinner in almost two months, but I have dinner with these guys every night.