In September, when I wrote about the new Formula Boats 380 Super Sport Crossover, a 38-foot-long, 11-foot-6-inch-wide beauty of a sterndrive-powered sportboat that TNT Custom Marine’s John Tomlinson test drove over the summer in Miami, the newly introduced offering that sits in the middle of the Decatur, Ind., company’s Crossover lineup between the 330/350 Crossover Bowriders and the established 400/430 Super Sport Crossover and All Sport Crossover models piqued some interest. (Read the column here.) 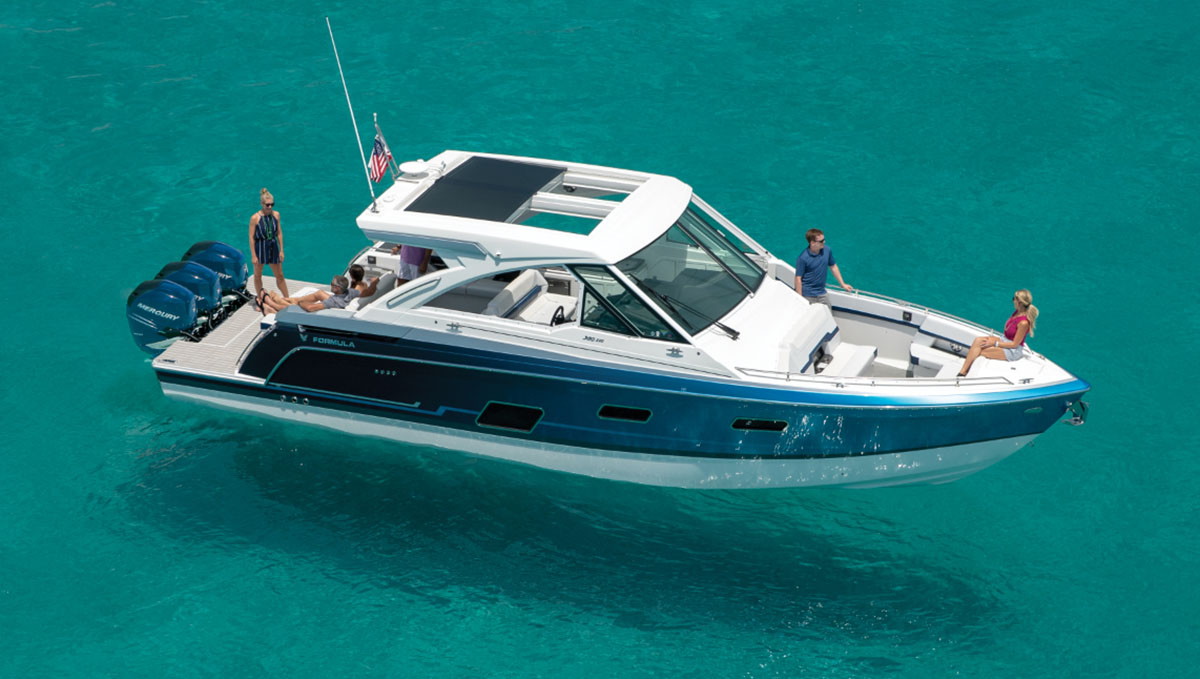 Much of the interest came from boaters wondering what kind of boat could possibly replace the company’s 382 FAS3Tech stepped-hull V-bottom that Formula shelved earlier this year. The verdict is still out. Other attention came by way of those wondering where the outboard version was since Formula offers its smaller and larger models with the alternative power packages. I even read a couple of comments from people who remarked that if outboards were available they’d buy one. Guess it’s time to put their money where their mouth is.

In all seriousness, it is great that Formula has designed its boats so there will be a variety to suit every taste and budget. The family owned company definitely understands that there are dealers and customers in the inland market where sterndrive power is still quite popular. It also recognizes, however, that outboard power is the hot ticket in many other areas, particularly in the coastal markets, which is why the new 380 SSC is going to be available with outboard engines in the Spring.

Formula anticipates offering the 38-footer, which is set up perfectly for entertaining thanks to its luxuriously spacious accommodations and features, with triple Mercury Marine 350 or 400 Verado engines as well as Mercury Racing 400R or 450R engine packages for those who want the extra performance.

The Formula design team is exciting about its soon-to-be-released outboard-powered 380 SSC.

And whether a buyer prefers sterndrive or outboard power, there’s an excellent chance that the 38-foot full-cabin bowrider that boasts a full-width cockpit experience and true overnight capabilities for four is going to check all the boxes since Formula’s Crossover fleet—now six models strong—continues to push class expectations.

Like the twin Mercury Racing 520-powered 380 SSC Tomlinson tested and ran close to its top speed of 52 mph, the new outboard version is going to have all of the same features, including the fiberglass hardtop with a full-width motorized glass sunroof that opens to the sky and a top-to-bottom windshield with a sliding bow window to port. Along with the boat’s electronic controls, joystick piloting with active trim and an impressive leather-wrapped, polished stainless tilt steering wheel, its versatile cockpit environment is loaded with electronics and creature comforts—of course—not to mention dozens of drink holders and an ample amount of storage space, including 13 different molded fiberglass tubs and lockers.

Although it is going to be several months before I get the chance to ride in an outboard-powered Formula 380 SSC—or have Tomlinson drive one and report back—I have a feeling the sea-carving Formula FAS3Tech stepped hull is going to respond quite nicely with a trio of outboard engines.