When Jeff Ziemer reached out via email many weeks ago about attending the late-August Speedonthewater.com Center Console Roundup in Lake Ozark, Mo., with the new 35-foot Norwegian-built boat he and his business partners were bringing to the U.S., it was quite apparent that he couldn’t wait for people to experience the first Draken Marine 35 SS during the 31st annual Lake of the Ozarks Shootout. 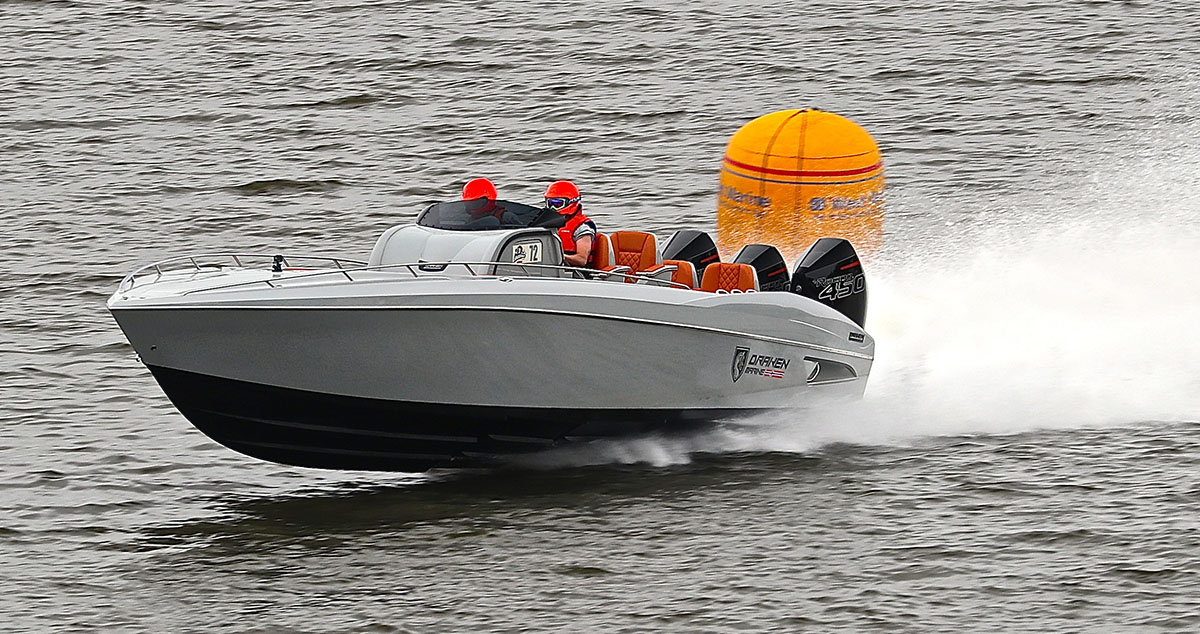 Andree Bakkegaard and Robert Siviter drove the new Draken Marine 35 SS with triple Mercury Racing 450R engines up to 93 mph on Sunday at the Lake of the Ozarks Shootout in Sunrise Beach, Mo. Photo by Pete Boden/Shoot 2 Thrill Pix

While his enthusiasm—or rather his energy level after what turned out to be an extremely long week—wasn’t as high as it would have been had everything gone according to plan, Ziemer was still excited to present the “fresh off the boat” 35-footer to the Speedonthewater.com team on Saturday afternoon from the docks at Captain Ron’s Bar & Grill. Along with introducing us to his partners, Andree Bakkegaard, Robert Siviter and Tov Vestgaarden, Ziemer walked us through the luxury high-performance center console powered by triple Mercury Racing 450R engines.

Based on Bakkegaard’s Predator Luxury Performance Boats hull design, which features a 24-degree deadrise with three small steps, a large notched transom and a pad, the first 35 SS is a fully vacuum-bagged layup with no wood anywhere. Well, except for its stylish teak floors. To complement the rest of the its elegant feel, Draken Marine chose the “roadster” look, which meant the boat didn’t have its optional T-top. 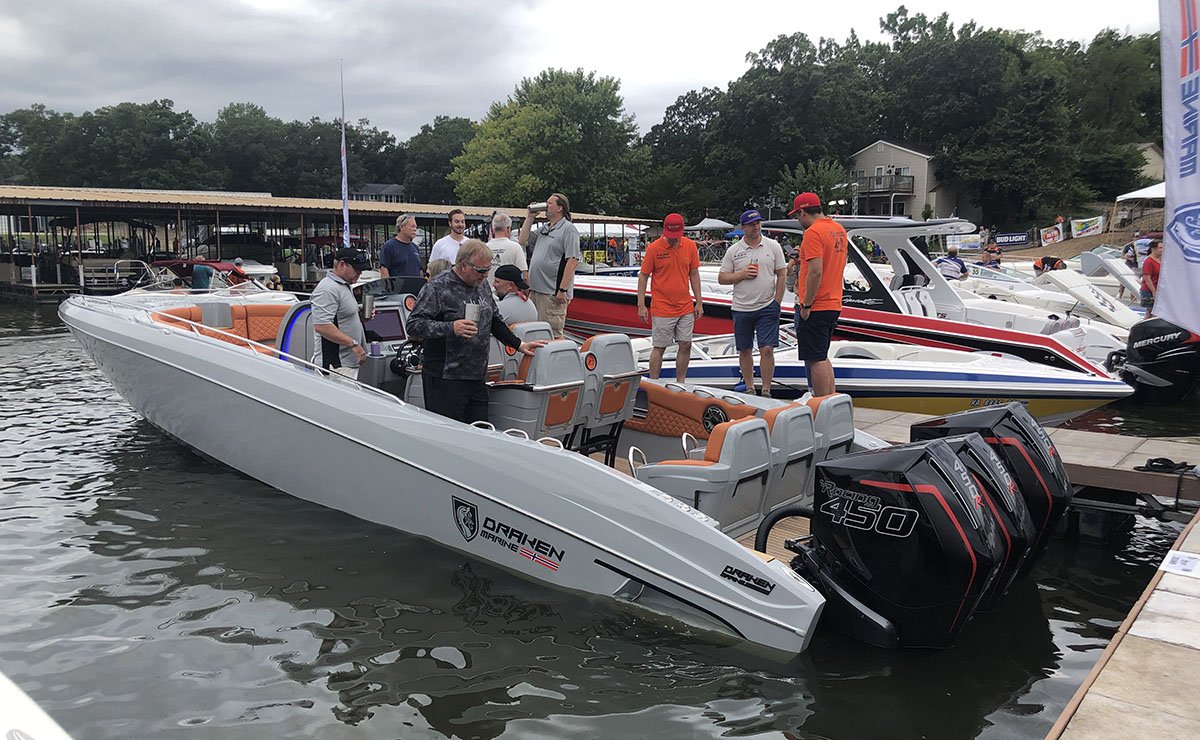 The Draken Marine 35 SS received tons of attention at the docks at Captain Ron’s over the weekend. Photo by Jason Johnson

Unfortunately because of a logistical nightmare that Ziemer painfully explained in detail at the docks Saturday, we didn’t get a chance to run the boat in the roundup. A man of his word, Ziemer was diligent in keeping all of us at Speedonthewater.com informed on whether the boat would be there as it was already going to be a tight schedule to get it to the popular Midwest boating destination by Wednesday in time for Thursday’s evaluation.

And, considering he spent three more days than planned in Calais, Maine, waiting for the boat to get transported from Halifax, Canada, to the international border, and then another 37 hours straight driving the 1,700 miles to the lake, any disappointment our end was trivial. Ziemer was expecting to attend the Center Console Roundup. He also had rented a house for the week, registered for Friday’s poker run and planned to install the speakers and gauges in town and even test the boat a little before running down the three-quarter-mile Shootout course. 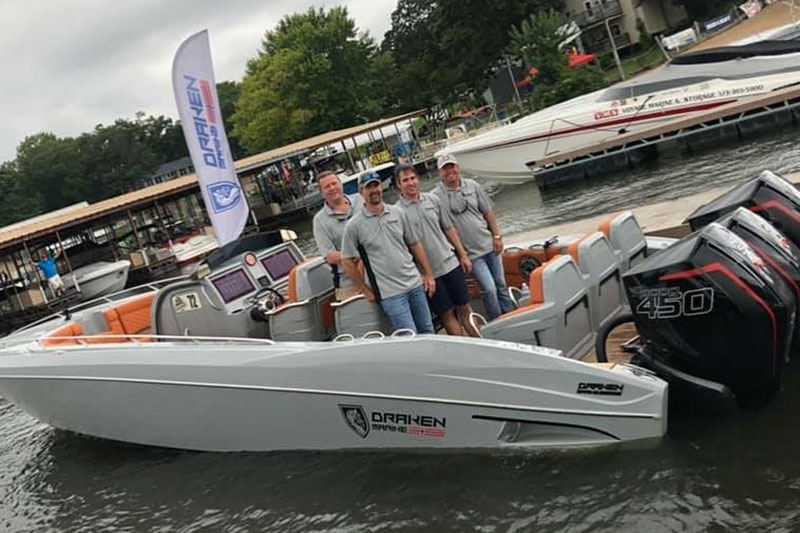 Instead the stereo and gauges were installed on Saturday morning at the local car wash a couple of hours before the boat was launched and driven over to Captain Ron’s. Hardly the way Ziemer and company intended to introduce the boat, which had a two-by-two stand-up bolster setup and was adorned with custom grab handles, loads of a cupholders, a tinted fairing, two 16-inch Simrad displays at the helm, three Livorsi Marine Monster GPS gauges, gorgeous burnt orange upholstery, a cabin up front, a head compartment in the console, a complete JL Audio stereo and LED lights throughout and underwater, yet the Draken Marine team deserves an “A” for effort.

The good news? Bakkegaard and Siviter were able to make a couple of runs in the Shootout on Sunday, the first at 93 mph and the second at 92 mph (the team ended up seeing 102 mph later in the day following a prop change after the Shootout was over). Plus, now that the boat has arrived at the Draken Marine headquarters in St. Petersburg, Fla., Speedonthewater.com should get an exclusive look at it soon enough thanks to test driver Grant Bruggemann of Grant’s Signature Racing in Bradenton, Fla. So stay tuned for that.