A grateful party guest approached me during a small speedonthewater.com gathering last Thursday night in Miami. “I can’t thank you enough for inviting me to this,” he said. “I got to hang out with my heroes tonight. Where else can you have a drink and talk to someone like Steve Curtis?”

Joined by Outerlimits’ Jason Amaral (left) and Dan Kleitz (right) in the cockpit of Jet, Curtis is working on sport catamaran design for the company. Photo Pete Boden/Shoot 2 Thrill Pix.

For the record, Steve Curtis, the dashingly handsome and charming, United Kingdom-born legendary throttleman, is a lot more than OK. I just couldn’t resist trying to play it cool.

But I couldn’t blame our guest for being a little star struck, because Curtis, the son of U.K.-based Cougar Marine founder Clive Curtis is a bonafide star in the offshore powerboat racing world. Most recently in his 33-year career, he throttled the Miss GEICO catamaran to a Super Boat International national championship in 2018 and an SBI world championship in 2017 in Key West, Fla., where he also throttled one of the Victory Team cats the following year.

But his best-known accomplishment to date arguably has to be throttling a 50-foot Mystic Powerboats catamaran to 244 mph during the 2014 Lake of the Ozarks Shootout in Central Missouri. 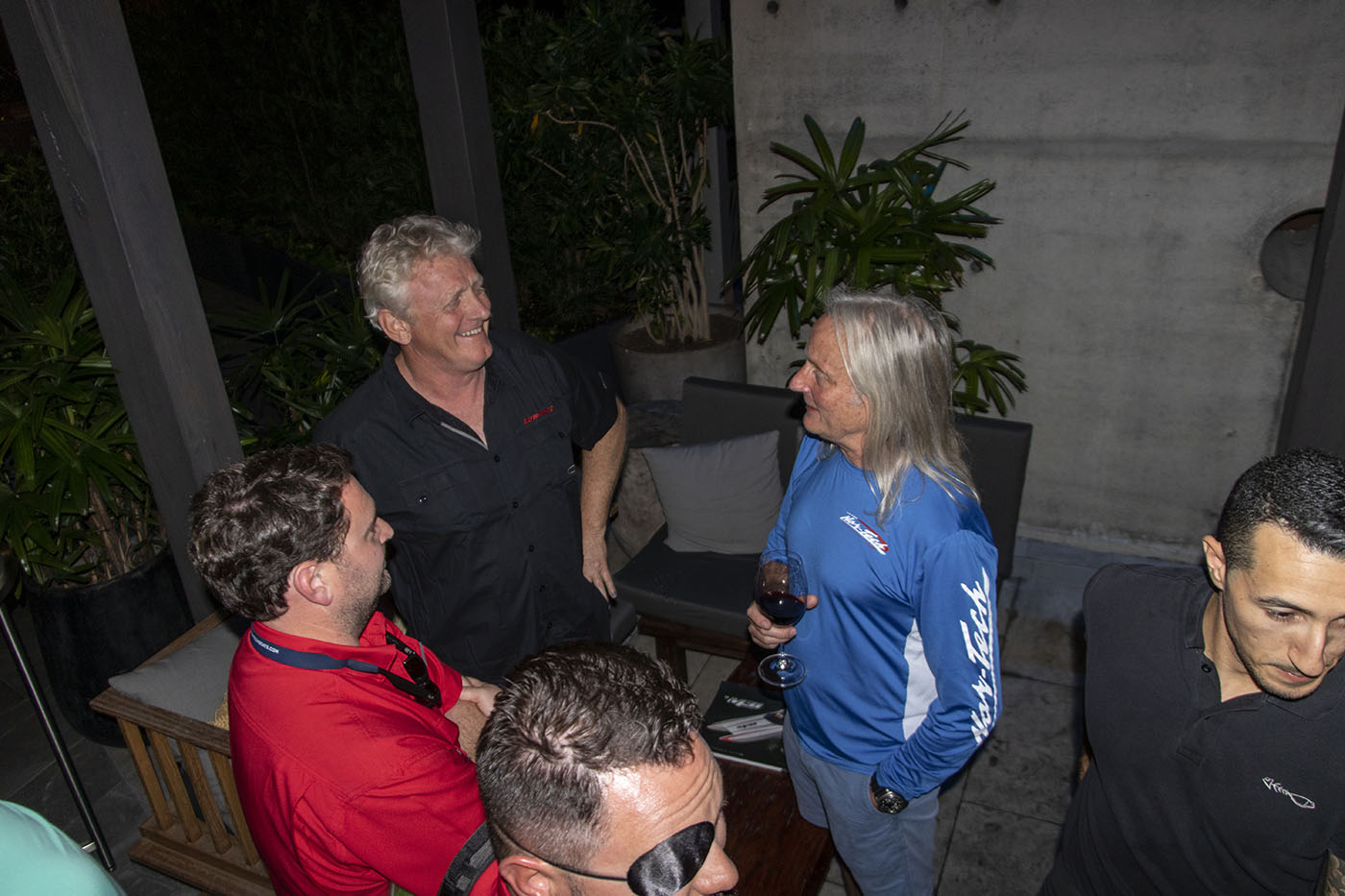 And in his “spare time” of late, he’s been working to help build what at least for now can be called the spec-engine “1100 Class,” a new category for the upcoming six-race Offshore Powerboat Association/Powerboat P1 series for the fastest boats in offshore racing. According to the Curtis, that class is shaping up to be solid.

“I think if we have six boats to start the season and 10 boats by the end of the season that would be great,” he said. “Miss GEICO is running the 1100 program. So is the Victory team, with one boat to start. Nigel Hook is committed with the Silverhook boat. I understand that Mike Defrees is on board as is the 222 Racing team, running the former Fendi boat, from Europe. I believe there’s at least one MTI team coming with Taylor Chastelet (the son of former offshore racer Jerry Chastelet) in the cockpit. I believe the Zabo team (which ran as Jesse’s Ranch during the 2018 SBI Worlds) is coming and I’ve been told that sometime mid-season the Abu Dhabi team will get involved with two boats. I’m not sure what’s going on with Huski Chocolate boat.

“I’m in the process of getting the old Victory 95 boat ready for a client who hopefully will come through and compete,” he added.

Right now, Curtis is on holiday with his longtime partner, Abbie, and their children in the U.K. But he’ll be back—and back to work—in a few weeks as the offshore racing season is just around the corner. And he’s more optimistic about the future of the sport than he has been for years.

“I think it’s going to be great,” he said. “Azam (Rangoonwala) of P1 and Smitty (Ed Smith of OPA) are bouncing off each other really well. They’re both doing what they’re good at. We’re finally going to have a solid, consistent offshore racing season. And if OPA/P1 gets Key West, Miss GEICO will be there.”