You are at:Home»Offshore Racing»Twice As Nice: Performance Boat Center Doubles Down

In what was somewhat of a surprise for most offshore racing fans, the Missouri-based Performance Boat Center team showed up in Cocoa Beach, Fla., for the season-opening race of the American Power Boat Association Offshore Championship Series with a new boat. And I’m not talking about the much-anticipated Super Cat-class 42-foot MTI—the Performance Boat Center/Jimmy John’s Freaky Fast boat throttled by John Tomlinson and driven by Myrick Coil—that was rigged and wrapped in time for a quick test session on Thursday on Lake of the Ozarks before being hauled overnight to make tech inspections in Central Florida on Friday.

“Man that 32 was a blast—I can see why that class is growing and growing,” Coil said after pulling double duty in Cocoa Beach. “It kind of felt like being in the big boat with the way it reacts. And while we’re not going as fast, the perspective of speed is similar because all of the boats are so competitive. You feel less vibration in the little boat and a lot of the speed is gained or lost with slight changes in trim. We found a happy spot and tried to maintain speed by controlling the trim and keeping the boat in the water. If we got airborne, the boat would go from 96 mph to 89 mph immediately. In the big boat, we control our speed more with the throttle, but with the outboard boat we pretty much ran wide open and just bumped the trim when necessary. It’s kind of amazing how fast you can run a two-stroke 300 boat in rough water.”

Coil, who hadn’t been in the boat until testing on Saturday, definitely enjoyed racing in close proximity with the first-place Shadow Pirate Doug Wright and the new FJ Propeller 32-foot Victory catamaran, which finished third, as did his teammate Williams, who Coil said was “freaking out” for about half of the race because he was having so much fun in the boat. He also explained that running the Doug Wright was kind of a last-minute decision by Mark Waddington, who co-owns Performance Boat Center with Brett Manire. 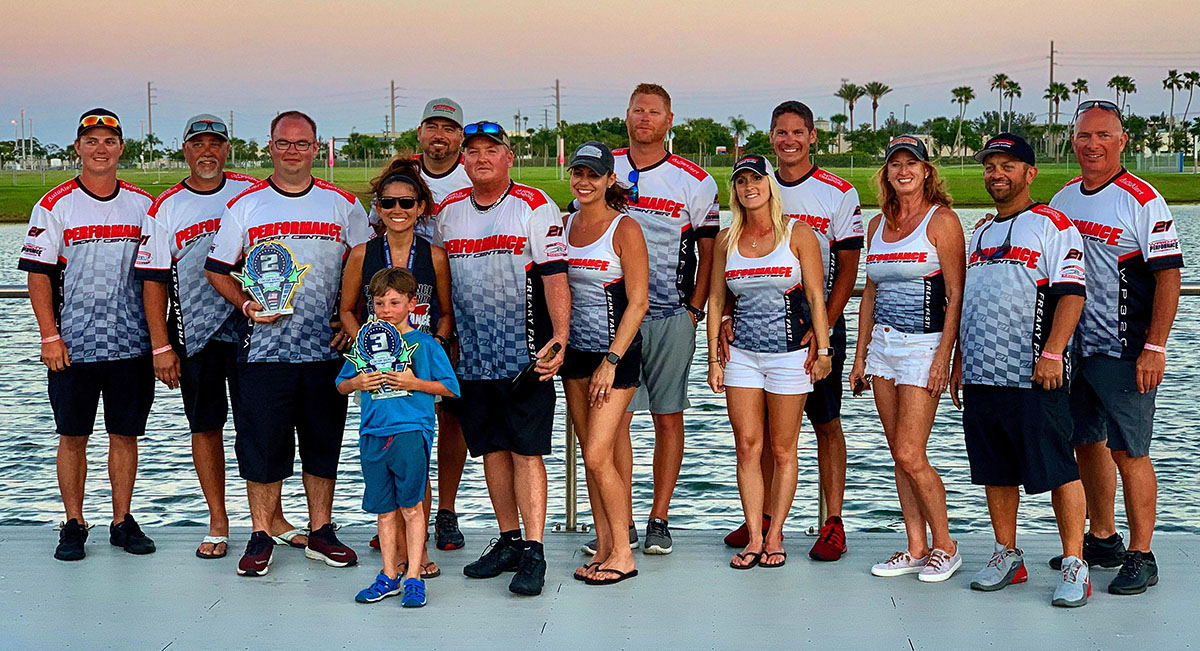 With second- and third-place finishes in Cocoa Beach, the Performance Boat Center team was happy with its results from the opening race of the APBA Offshore Championship Series. Photo courtesy William Holtz/Lake TV

At one point, while the 32-footer was being rigged at the dealership and service center in Osage Beach, Mo., the canopied catamaran was going to be for sale as a race-ready boat. But that changed as Waddington gave the team the go-ahead to race two boats this year. And according to Coil, that’s the plan for the rest of the season.

“We expect to be competitive in Super Stock, just as we intend to be in Super Cat with the new MTI,” Coil said. “We barely had any time to test the MTI so we weren’t too disappointed with third place even though we wanted to win. I thought we’d win, but I always think we’re going to win—I’m optimistic like that. At the end of the race, I was just happy we made it through without anything breaking. To finish on the podium, in both boats, was a good feeling. It was nice to leave there and not be sitting in last place heading into race two back at home.”

Coil, who credited Performance Boat Center’s Andy Sanders for prepping the Doug Wright for Cocoa Beach, added that getting the MTI ready for last weekend’s opener was as “down to the wire” as it gets considering they didn’t get the bare hull until the last week of April.

“We put the boat in the water Wednesday night just before dark for a single blast,” Coil said. “We were zombies by then—Greg (Hillmer, the team’s crew chief) and I put in 20-hour days for a week straight—but we needed to make sure everything was installed right and check for leaks. That night, Jim Wheat and the team at Pro DeZigns wrapped the boat and had it back to us Thursday morning so we could test it from 8:30 a.m. to 1:30 p.m., before hitting the road to make tech at noon on Friday.

“We’ll be a little more prepared for Lake Race next week,” he said with a laugh. “Our hometown race is always fun. And it should be even better this year with the new host venue and course. Although I think the new course is going to be a little slower, it will be nice to have everyone at Camden On The Lake Resort. Plus the spectators should have some great places to watch the race this year.”