You are at:Home»Photographers»Crazy Boats and Killer Surf: Inside The World of Photographer Robert Brown 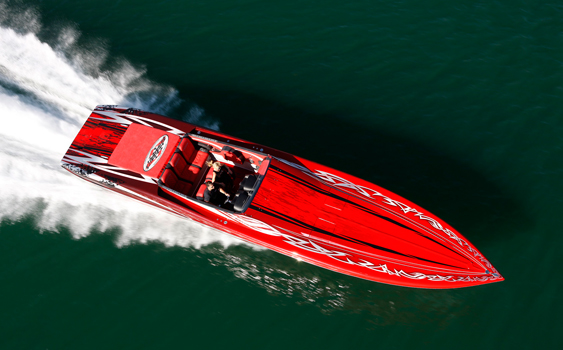 Powerboat magazine classic: “When I shot for Powerboat all I wanted to do was make Tom Newby happy,” says Brown.

Photographer Robert Brown first caught my attention in the late 1990s during a long bus ride on the way to a Sea-Doo media event outside of Montreal, Canada. It was a solid two-hour bus ride from the airport to a quaint little lakeside resort in the middle of Canadian nowhere, the bus was well-stocked with libations and Brown was holding court and carrying on with the various magazine editors on board in his usual boisterous and flat-out hilarious style.

By the time we reached our destination, we were friends.

By the time I had a chance to look at some of his personal watercraft images during the next couple of days, I knew I had to introduce him to Eric Colby, my editor at Powerboat magazine at the time. And so began Brown’s 13-plus-year photography relationship with Powerboat magazine. In fact, his images regularly appeared in the magazine’s pages, as well as on its cover, until it shut down earlier this year. 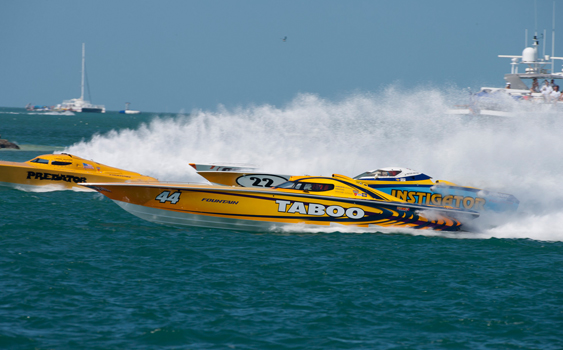 Brown, who is 54 years old and lives in San Clemente, Calif., started shooting when he was 18 and became a full-time professional photographer 12 years later. His first subjects were surfing and—try not to hate him—sailing.

“My brother was a big Hobie catamaran sailing racer,” says Brown. “I shot a lot of stuff for Hobie Hotline magazine when I first started.”

A Southern California native, Brown grew up surfing so shooting the sport appealed to him. He sold his first surfing images to Surfing magazine when he was 20 years old. That began the first stage of Brown’s true education in photography—with the help of a well-known mentor.

“I trained under ‘Flame,’ the late Larry Moore, who was Surfing magazine’s photography editor forever,” Brown says, then laughs. “I don’t have a lot of formal education in photography. I paid for and went to a lot of select lighting seminars put on by people I respect, but I could not do the long agony—the old ADD kicks in too much—of the school route.” 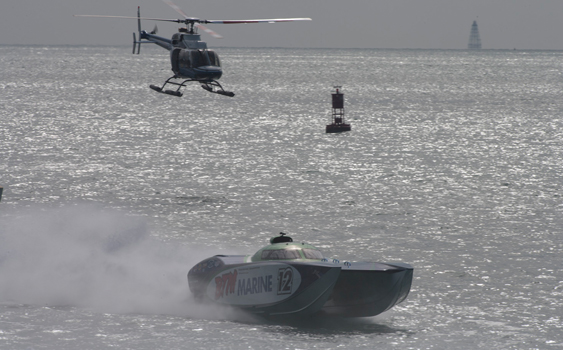 “If I couldn’t shoot an offshore race from a helicopter, I always at least liked to have in the photo,” says Brown.

Working with Moore, as well as shooting plenty of Indy Car racing and motocross racing in addition to surfing, gave Brown the photographic chops he needed for the personal watercraft boom of the late 1990s. The industry needed shooters with motorsports and watersports sensibilities, and Brown had both. He quickly found work with Kawasaki, Sea-Doo and Yamaha.

“I always wanted to be able to shoot anything, and I needed something to add to the mix,” says Brown. “One day, I saw this watercraft race off Carlsbad [Calif.] and I thought it looked like a combo of surfing and motocross racing. It was perfect.”

And that is what landed Brown with me on a bus bound for Canadian nowhere that fateful day in the late 1990s. It’s also what began the second stage of his education in photography. A week or so after the Sea-Doo event, Colby called Brown and assigned him a personal watercraft shoot we were doing on Lake Mohave a few weeks later. The images that came out of that shoot were stunning—so stunning, in fact, that Brown was hired for Powerboat’s next round of Performance Trials. 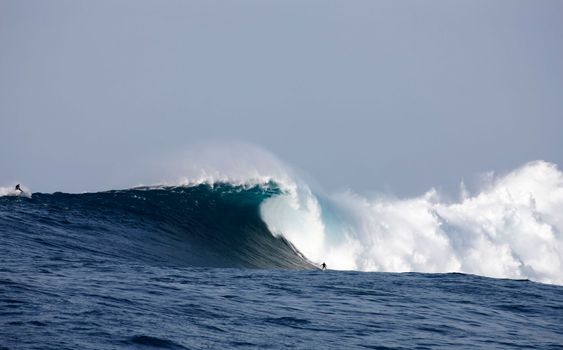 Among the world’s top big-wave surfing photographers, Brown captured this image of Mike Parson’s riding a 60-plus-foot wave in 2008.

“Tom Newby pretty much owned Powerboat’s photography program at the time, but I filled in for him when he went on vacation,” says Brown. “I learned quite a bit from. He came out of the traditional, formal photography world of the Brooks Institute of Photography. He had his own way of doing things, but I probably learned as much from him in a few years as I did hanging out with other photographers for ten years.

“Honestly, when I shot for Powerboat all I wanted to do was make Tom Newby happy—I considered him more of my boss than any of the editors,” Brown continues, then cackles. “He set the standard. I wanted my stuff to look identical to his because in actuality he was running the photography program at Powerboat.”

Brown also shot plenty of offshore races for the magazine. He enjoyed shooting offshore races because he just likes racing in general, but admits that one aspect of it always made him nervous.

“There were so many aircraft in the air during offshore races,” he says. “I loved and trusted all the pilots I flew with, but I spent a lot of time looking around for other aircraft.

“If you have never seen a view of an offshore race from up there, it’s really quite special,” he continues. “You can see everything. As a photographer, you can have the pilot go high so you can look around to check out the racecourse and figure out where things are going to happen, but you can only do that in slow times in the action so you don’t miss anything. You can also figure out where things might be happening by watching where things bunch up on the course.” 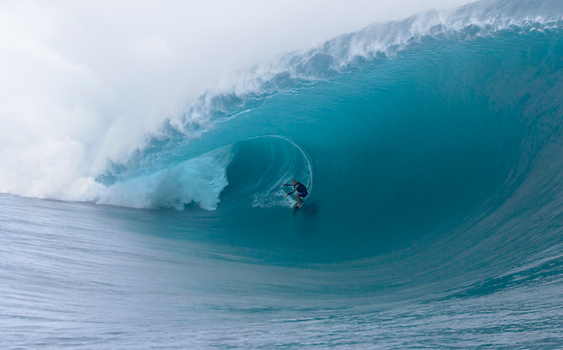 Among Brown’s four Billabong XXL Photography award-winners is this image of Shane Dorian riding a cavernous monster at Teahupoo in Tahiti.

While high-performance powerboat and personal watercraft photography became Brown’s professional bread and butter, he never completely faded out of the surfing photography scene. Instead, he specialized and became one of the world foremost big-wave photographer.

Brown photographed the first successful surfing expedition to Cortes Bank, a big-wave surf spot 100 miles west—yes, west—of San Diego in 2001. Peahi or “Jaws” on Maui, Todos Santos in Baja California, Mavericks in Northern California, Teahupoo in Tahiti—you name the big-wave surfing spot and Brown has shot it, likely dozens of times. He has won the annual Billabong XXL Award for Photography four times—three times for the biggest wave image and once for the best tube ride image.

Most recently, he drove his specially equipped 36-foot Twin Vee catamaran photo boat—called U.S. Camera Boat—with twin 300-hp Mercury Verado outboard engines as the filming platform for the recently released motion picture, “Chasing Mavericks”. Brown, who has used the boat extensively for video and commercial work, says it was yet another great learning experience for him.

“Two years ago, we did the first tests out there on my boat to see if we were going to be able to shoot the movie there,” says Brown. “This year, the studio used my boat for all the big-wave scenes and I was the driver. It wasn’t stressful—it was exciting and I learned a lot, especially on the right days. One day when we were filming out there was probably the best day I’ve ever seen at Mavericks. I was even able to pull out my camera and shoot a few.

“I’ve probably been to Mavericks on my boat about 30 times, and I’ll tell you one thing,” Brown adds, then laughs again. “The first time I saw it was from the cliffs, I swore I would never go boating out there. It was terrifying.”