You are at:Home»Poker Runs»Are Poker Runs a Thing of the Past? 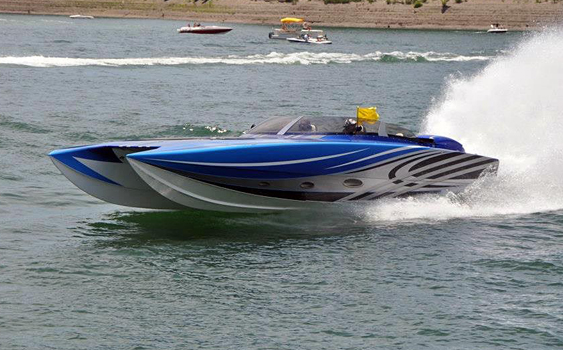 Are poker runs a thing of the past? It’s a discussion that’s been ongoing for several years as the performance-boat market has diminished and many poker runs have witnessed a decline in participation. From my recent experience, that assertion couldn’t be farther from the truth.

Obviously not every event in the country is thriving—and some of the most popular ones have seen a noticeable registration dip—but you don’t have to look far to find events that are growing despite a still sluggish economy.

For example, while I was in Texas last week enjoying the hospitality and camaraderie of the Texas Outlaw Challenge, a whole other group of boaters was gathering roughly 1,000 miles away for the Thunder Run on Kentucky’s Lake Cumberland. Besides taking place on the same weekend in June, the two events have a few other things in common. Let me explain.

First of all, both runs—the sixth annual Texas Outlaw Challenge and the fifth annual Thunder Run—have seen a significant amount of growth since their inception. This year, the Texas Outlaw Challenge, which features four days of boating, entertainment and more for its participants, saw a jump from 125 to 165 boats (registration was less than 100 in 2011). After the event, event founder Paul Robinson said he was pleased with the overall turnout and is already looking forward to the 2014 event, which is presented by Fast Trac Transportation.

Justin Lucas, who owns Go Fast Threads and organizes the Thunder Run with Dan Weiss, said the event reached the 100-boat mark for the first time this year, with boats coming from as far away as Canada and New York. Although the run attracts many high-profile boats—Florida’s Bill Pyburn brought his well-known Pure Platinum 388 Skater to town to run with his friend from Kentucky, Mike Thornton, who owns the Frisky Business 388 Skater—it isn’t all about the extremely powerful, big-dollar boats. 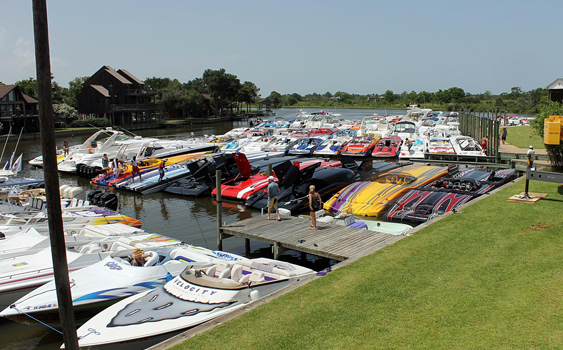 A variety of are boats docked in front of Kenny Armstrong’s house for the premier stop of the sixth annual Texas Outlaw Challenge. (Photo by Jason Johnson.)

According to Lucas, they try to take care of every single participant whether they are in a brand-new MTI or a 20-foot Baja, and he believes that has a lot to do with the positive response to the event, which began as a small local run. Lucas said it’s the smaller boats that have fueled the growth, adding that they had to add a third 75-mph-and-under group to the run this year.

The “appeal to every boater” mindset is another similarity the Thunder Run shares with the Texas Outlaw Challenge. Don’t get me wrong, the new Cigarettes, MTIs, Skaters and Outerlimits steal the show from the docks at the Turtle Club or Topwater Grill (or even docked outside Kenny Armstrong’s house), but it’s the mix of center consoles, cruisers and performance boats from the likes of Baja, Donzi, Eliminator, Formula, Fountain, Sonic, Spectre, Velocity and more, that make it a show.

Last, but certainly not least, another connection the two poker runs have is a focus on safety. Lucas said they let the Thunder Run’s 100-mph-and-over group go first with the slower groups leaving in intervals behind them. 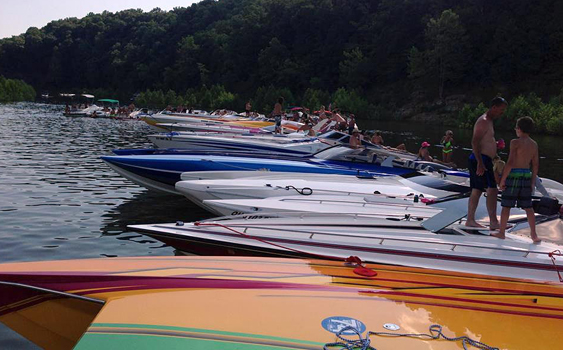 The Thunder Run on Kentucky’s Lake Cumberland welcomes boats of all shapes and sizes to participate in the event. (Photo courtesy Thunder Run.)

Along with organizing a GPS-based Shootout the day before the poker run on a designated course with safety crew, Robinson encourages teams to start the poker run in a group from Clear Lake, but then head to any of the 11 available stops in no particular order. By the way, congrats to overall Shootout winner Kenny Mungle, who posted a 171-mph top speed in his 32-foot Skater Gone Again, which is powered by twin 1,500-hp Sterling Performance engines.

I’d be remiss if I didn’t include one last similarity—both events know how to throw some colossal parties. Still, that’s beside the point. What seems clear to me is that this sport is far from lifeless. In fact, I’d argue that the future looks bright especially if we see more “real-world” boats and newcomers coming out to play.

“It seems like everyone who comes to the Thunder Run comes back and brings someone else with them,” said Thornton, who lives in Paris, Ky., and ran his 388 Skater in the Thunder Run. “The event has come a long way since its inception. It’s well organized and there are a good variety of boats. That’s what I like about the run. It’s more in tune with the everyday boaters than some of the others I’ve done.”