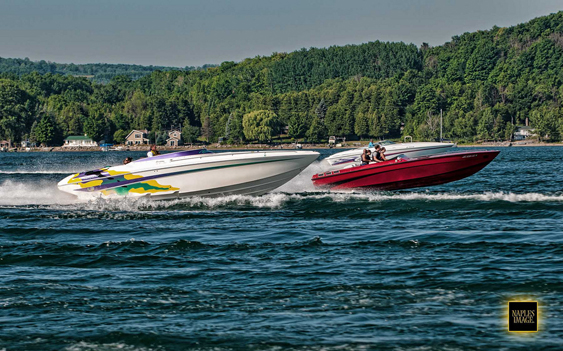 Capped at 100 boats this year, the Boyne Thunder Poker Run attracts an array of go-fast boats to some of the most beautiful water in the country. (Photos by Jay Nichols.)

When the annual Boyne Thunder Poker Run kicks off this year between July 11-12, in all likelihood there will be 100 assorted go-fast boats and center consoles in the fleet. To put that number in perspective, it wasn’t all that long ago that 100 boats was considered “benchmark registration” for the Florida Powerboat Club and Poker Runs America, the two biggest players in the for-profit poker run business. To add additional perspective, Boyne City, Mich., which is located on the shores of Lake Charlevoix and is ground zero for the event, is hardly a big-name venue. And, truth be told, it’s not the easiest place to get to—you have to want to be there.

And on the opening day of registration last Saturday, 67 boat owners demonstrated their desire to be there by signing up for the event online. At present, registration stands at 73 boats. To put that number in perspective, the event, which is celebrating its tenth anniversary, pulled in 85 boats last year—and there would have been more had the organizers not capped the run at 85 entries.

“This year, our cap will be 100 boats,” said Peter Oppermann, who works with 10 or so other volunteer organizers and one paid Boyne City employee to organize and host the event each year. “We know we can handle that number now. Last year, we capped it at 85 boats because we didn’t want to grow so big that we couldn’t handle the logistics of it.”

As the popular real estate mantra goes, location, location and location plays a big role in Boyne Thunder’s surging popularity. The 130-plus-mile run starts on Lake Charlevoix and passes through Round Lake—gallon for gallon one of the most beautiful inland bodies of water and settings you’ll ever see— before hitting Lake Michigan twice, once before lunch and once after. Immaculate freshwater, tall dunes, historic lighthouses and more, the Boyne Thunder course showcases all there is to love about Michigan boating during what is a relatively short season. 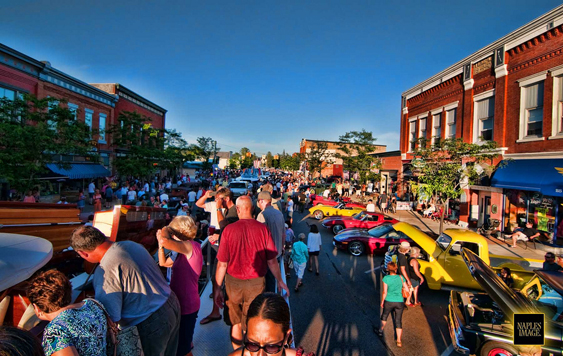 Boyne Thunder is a major summer event for Boyne City and the surrounding area. (Photos by Jay Nichols.)

“The water is really, really awesome,” said Oppermann. “And in the past few years, we’ve been blessed with good conditions on Lake Michigan—it’s been pretty flat. But I think the event itself is what attracts people. It’s hard for me to know exactly why that is because I’m in the middle of it, but people tell us it’s the one event they look forward to every summer. They tell us it’s their family vacation. We did an exit survey last year, and 100 percent of the participants surveyed told us they would be back this year.”

With that kind of response, it’s surprising the run, which attracts participants from all over the Midwest and Southwest, hasn’t sold out already. Rest assured, it will. Boyne Thunder also has grown popular with corporate sponsors including Ilmor Marine, Mercury Racing and Nor-Tech. (Most of the proceeds from the event go to Camp Quality, a local camp for children with cancer.)

Last year’s impromptu party on Boyne Mountain after the casual Thursday Fun Run for participants who get into town early has been made “official” this year and will be sponsored by American Custom Marine of Kimball, Mich. And while the run certainly attracts its share of high-end boats such as Low Altitude, a well-known turbine-powered 50-foot Mystic owned by Michigan resident and longtime Boyne Thunder supporter Tom Borisch, there are plenty of everyday production-built boats rides and center consoles.

“With a lot of people coming from 250 miles away and farther, we started the fun run and we’ve made the Boyne Mountain party official to say, ‘Hey, come early and enjoy our area for more than two days,’” said Oppermann. “As the local boaters in the area, we’ll be glad to have people come in early and get out on the water and hang out with us before the run. We’re looking forward to having another great event.”

Words to the wise: If you’re interested in the Boyne Thunder Poker Run, register now.