Deal With It, Steve Gordon’s show-stopping Skater that is powered by twin turbocharged Sterling Performance engines, is expected to be at the event once again. Photo courtesy Chip Miller

There are a few things I can guarantee will happen with this year’s Boyne Thunder Poker Run in Boyne City, Mich. First of all, the 14th annual event will sell out — there’s no doubt about that — once registration for past participants opens on March 1st, followed by some limited spaces for new participants that open on March 15. The question isn’t if the event, which takes place July 7-8, will reach its 115-boat capacity, it’s a matter of how fast it will fill up.

Second, the event’s well-liked Thursday evening welcome party will take place at the top of Boyne Mountain Resort followed the next day by the well-supported community street festival that will be packed with boats, hot rods, motorcycles and more. The show will then spill over into the adjacent marina for the stereo wars before everyone shuts it down in preparation for the next day’s picturesque run through Lake Charlevoix, Round Lake and Lake Michigan.

Third, and most important, the Boyne Thunder Poker Run is sure to raise an impressive amount of money for local children’s charities Camp Quality Michigan and Challenge Mountain. I saw it first hand when I attended the event three years ago. It’s impressive how many volunteers contribute to the cause and how willing the event participants are to donate money.

Oh and one more thing — any newcomer to the run is sure to have the time of his or her life. Trust me, my first and only Boyne Thunder experience was unforgettable, and the weather was far from nice. That didn’t matter thanks to the beautiful town and resort, welcoming people and magnificent scenery in an area of the country that is unlike anything this Californian had ever seen.

One first-timer who is excited to attend the 2017 run in five months is a renowned physician specializing in spine care and resolutions — Dr. Michael Janssen, the founder of the Center for Spine and Orthopedics in Denver. Best known as “Doc,” Janssen already has his slip reserved at the event for Without Limits, his 53-foot canopied Outerlimits Offshore Powerboats V-bottom. Yes, he has a slip even though registration hasn’t opened. 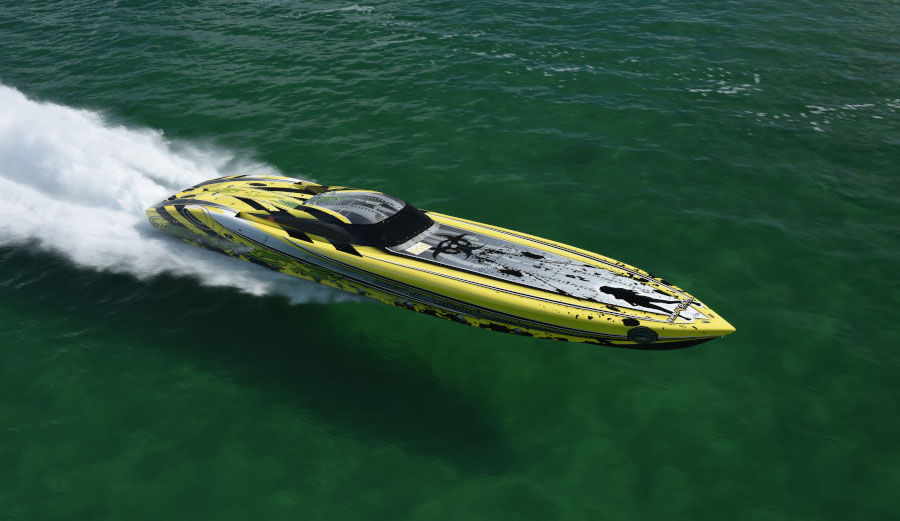 In order to sign up Without Limits, Janssen sponsored the event with both the Center for Spine and Orthopedics and Snowy Mountain Brewery, the brewery he owns in Saratoga, Wyo. Sponsorship options have been available for about two weeks, according to American Custom Marine owner and Boyne Thunder committee Mike Knoblock, and Janssen is one of many who contribute to the fundraising efforts early (before Feb. 17 this year) in order to get a preferred slip assignment.

“I’ve been fielding calls since the day we made the sponsorship announcement,” said Knoblock who can’t wait to run Mamba, his canopied Outerlimits 51 GTX, in the poker run this year. “Besides the corporations and local businesses that sponsor the event, we do get some guys who step up at the $3,500 corporate sponsor level to make sure they get a slip. We’re expecting the event to sell out again, probably on the day it opens, and we encourage people to put their names on the wait list because cancellations are possible.

“We’re always excited to see new participants, which is why we leave about 10 to 15 spots open each year for new boat registration,” he continued. “It’s going to be cool to have Doc here to join what should be a strong Outerlimits fleet as Dave Scotto has already signed up with his 50-footer. I’m also looking forward to seeing some of the big Skaters—there’s one in particular that might make its debut at the event—not to mention the classic Apaches, Cigarettes and Nor-Techs.”

Janssen said he’s looking forward to the event as he’s heard a lot of great things about it from fellow boaters.

“I’ve talked with several people who have been to Boyne Thunder and they informed me that it was one nicest poker runs in the country in terms of places to visit and spectator support,” said Janssen, who is also known for racing his Snowy Mountain Brewery Outerlimits, which is for sale. “I’m planning to enjoy the poker run scene a little more this year—I’m going to do Desert Storm in Lake Havasu, Boyne Thunder, the Lake of the Ozarks Shootout and Key West for sure, and I’m working on my schedule to see what other events I can fit in.