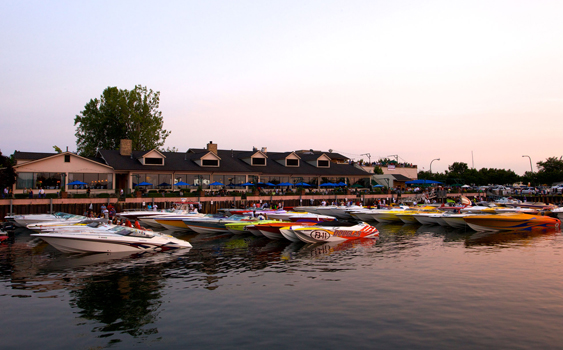 The Buffalo Poker Run has someone special in its corners its drivers’ meeting this year. (Photo by Tim Sharkey/Sharkey Images.)

Forget course coordinates and card stops and raft-up procedures. Important as those things are, they’re really not what the drivers’ meeting held before every poker run is about. You can even forget the part about drivers not touching a drop of alcohol until their boats are tied up at the dock at the end of the run, because though it absolutely has to be said those who don’t get it already never will.

Here is the nut of any drivers’ meeting before a poker run: It’s the last chance for an organizer to remind—and beg and plead, if necessary—everyone behind the wheel to be careful out there. Because while you can break down “careful” into myriad actions, techniques and awareness levels, it simply means, “Use caution.” And you could argue that every major accident that’s happened since poker runs took to the water could have been avoided if the people involved had done just that.

To deliver exactly that message this year, the organizers of the annual Buffalo Poker Run in Western New York are bringing in someone who knows exactly what he’s talking about. Tres Martin, the founder of the Performance Boat School that bears his name, will speak to the drivers on the morning of the August 8 run on Lake Erie. As he’s done before the Desert Storm Poker Run for a number of years, Martin is coming to town to lead a Performance Boat School course for go-fast boat owners in the area the week before the Buffalo event.

“It’s been in the works a couple of years now,” said Anthony Scioli, the main organizer of the Buffalo Poker Run, the biggest annual event in the Western New York Offshore Powerboat Association’s season. “A few of our local guys expressed interest when they saw him doing courses before other poker runs. We thought it would be a great thing to do for our guys—I think we’ll have about 10 of them. And I convinced him to do a little presentation at our drivers’ meeting.”

Believe it or not, the Buffalo drivers’ meeting speaking gig will be Martin’s first. While he’s spoken in front of more Performance Boat School classes than he can recall, he has not done it in front of a large group of operators—in the Buffalo Poker Run’s case it will be likely be more than 100—assembled in one room shortly before a poker run begins.

So what does Martin plan to say? “I’m just hoping to get everyone to wizen up a little,” he said. “I think if I can change their attitudes 10 or 15 percent, enlighten them and expand their situational awareness, maybe we can prevent one extra accident this year.”

In his own way, with his own techniques and language, Martin will be asking the drivers before him that morning to be careful out there. Most will listen and apply what they hear. A few won’t. Regardless, thanks to Martin and Scioli the most essential—and basic—message of the morning will come from someone who knows what he’s talking about.

Be careful out there.