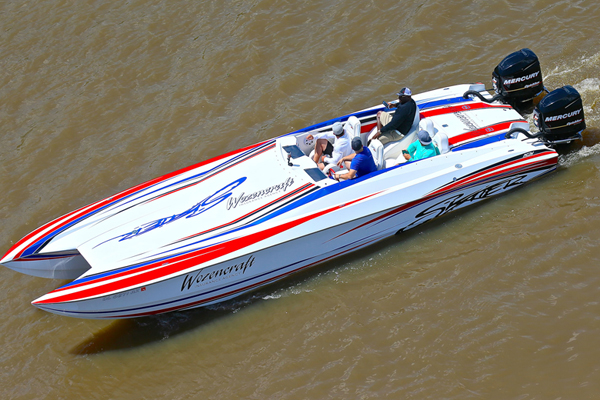 Wozencraft left his 32-foot Skater in Louisiana, as he’ll return in a few weeks to haul it to an event in Mississippi.

When I caught up with Rick Bowling yesterday by phone, he was just leaving a Love’s truck stop in San Antonio, Texas, with his 37-foot Gone Again Talon catamaran in tow and heading home to Alamo, Calif. A likeable, longtime performance boat owner and well-known former offshore racer, Bowling and a couple of his friends spent last weekend exploring the Louisiana Bayou and Lake Pontchartrain in the 37-footer and making new friends at the Tickfaw 200 Poker Run. With some 600 miles behind them, Bowling and company still had 1,700 miles to go before arriving in home in Northern California.

What inspired Bowling and his pals to make the long trip?

“Well, I was originally going to the Desert Storm Poker Run but I’ve done that like 20 times,” he said. “When they ended up being on the same weekend, I decided to go to Tickfaw instead because I had never been there before.

“We had a great time,” he continued. “Everybody is so friendly — everybody is always trying to help you anyway they can. It’s that Southern hospitality thing. The bayou and Blood River Landing, where it’s based, I guess the closest thing I can relate them in my own experience to is the jungle ride, without the hippos, at Disneyland.”

Earlier in the day, I caught up — again by phone — with Devin Wozencraft of the Wozencraft Insurance Agency based in Riverside, Calif. Unlike Bowling, Wozencraft was on his way to catch an 1,800-mile flight from Baton Rouge to Southern California as he left his 32-foot Skater catamaran in Louisiana. In a few week weeks, he’ll come back and haul the cat to the Smokin’ The Sound Poker Run in Biloxi, Miss. 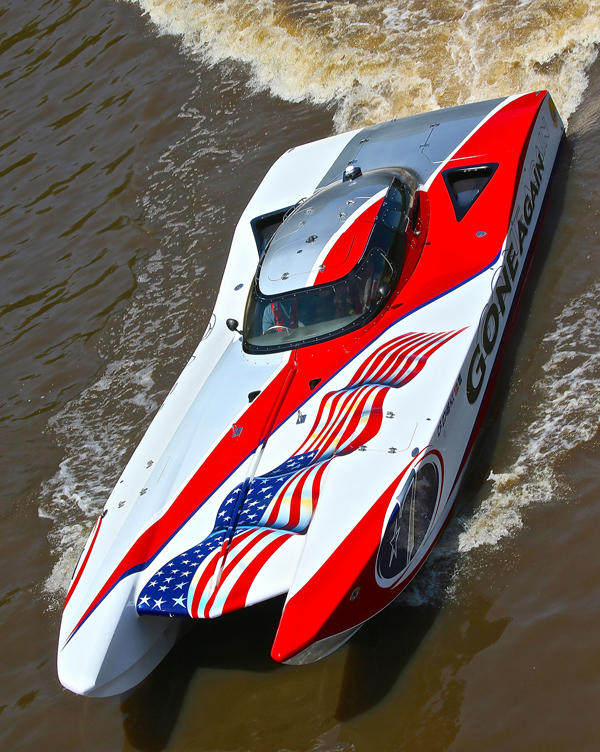 Said Bowling, who brought his Gone Again catamaran to last weekend’s Tickfaw 200 Poker Run from California, “If it were closer to home, I’d do it every year.” Photos by Pete Boden/Shoot 2 Thrill Pix.

Like Bowling, Wozencraft is a veteran of the annual Desert Storm Poker Run in Lake Havasu City, Ariz. — in fact, he’s a longtime supporter of the event and — as he has in years past — sponsored the first card stop, during last Friday’s poker run. Also like Bowling, he decided to try something new this year and was spellbound by the experience.

“It was fantastic and unlike any other poker run I’ve done,” he said. “The closest words I can throw out to describe my experience are chill, laid back, gracious hospitality and just plain fun.

“I made my decision to go just two or three weeks ago,” he continued. “The primary reasons were Michael Pierce and Nate Michel, two fine individuals. They hooked me up in every way you can imagine, let me stay with them, took care of my boat. They even have someone washing the boat now and they’re storing it for me until I come back.”

Of course, longtime Tickfaw 200 participant and performance-boating bon vivant John Caparell of San Diego returned to the event with his 32-foot Doug Wright catamaran this year. But he’s writing a feature article on his experience for the May/June issue of Speed On The Water digital magazine, so that story — and it’s going to be a doozy based on his adventure-filled journey and the event itself — will have to wait.

As for Bowling and Wozencraft, who’ll beat Bowling home by two days thanks to the miracle of air travel, they’re still savoring their rookie Tickfaw 200 Poker Run experiences. And that’s not going to stop anytime soon.