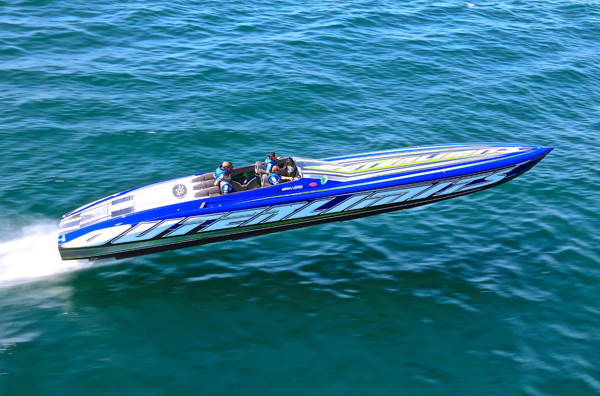 If sometime during the upcoming Lake Cumberland Poker Run in Kentucky you catch a stirring rendition of “Oh Canada”—the Canadian National anthem in case you’ve been living under a rock— don’t freak out. No one slipped anything funny in your drink. You’re not hearing things. You’re still at a poker run, not a hockey game.

Fact is, there’s a healthy contingent of performance-boat enthusiasts from the Toronto, Ontario, area headed to the annual blockbuster event. Presented by State Dock and known for what could be the world’s largest go-fast boat raft-ups and an outrageous good-time houseboat village, this year’s run is attracting perhaps the biggest north-of the-border group in its history. And the pilgrimage was inspired—so to speak—by Dave Scotto of Team Gotta Go Outerlimits SL 50 V-bottom fame.

How do I know? I caught up with Jay Anthony Cooke, a Toronto area-based performance-boat lover—he used to own a 36-foot Nor-Tech catamaran called Two Face—who’ll run FB Marine Group’s currently for sale 52-foot Skater cat with his wife, Carrie, in the event. Like Scotto, Cooke has enjoyed the run in the past and is eager to return.

In addition to the Scotto and Cooke groups, Canadian Ken Jensen is bringing Disturbing Behavior, his 40-foot Nor-Tech cat, while Kevin Primmer will run his 42-foot Statement V-bottom dubbed Invitation Only in the event. Raymond Roberts, who co-owns the Double R Performance with his brother, Peter, will join Ed Poirier and Poirier’s 50 Nor-Tech.

From Toronto to Lake Cumberland, with a boat in tow, is a healthy 12-hour haul. But given that the Kentucky poker run is for all intents and purposes the last major gasp of the summer go-fast boating season—nothing big happens again until the Florida Powerboat Club’s annual Key West Poker Run in November—it’s more than the worth the effort for the Canadian participants.

“Scotto planned it with the Outerlimits crew last year,” said Cooke. “And I think Kevin Primmer has been a few times. But the crew coming grew once we told a few people what a great time we’ve had there.”

Scotto and his team members are already on their way. This will be his fourth Lake Cumberland Poker Run, and he can’t wait to get there.

“I like everything about it,” he said. “I like the way it is a two-day poker run. You’re not stressed out about leaving at a certain time. You can go with your group, take your time and enjoy it. I like all the houseboats and the docks and the dancing at night. The parties are good. The scenery is good. Everything about it is good.”

So get ready, Lake Cumberland. The Canadians are coming. Oh, Canada.