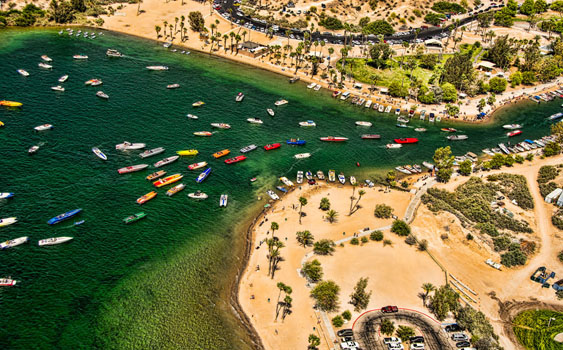 Boaters from across the country are expected to take part in the Desert Storm Poker Run in Lake Havasu City, Ariz., in April. (Photo by Jay Nichols/Naples Image.)

I know it’s only January, but as of today, the Desert Storm Poker Run in Lake Havasu City, Ariz., is officially only three months away. With some new wrinkles in store for 2015, there’s already plenty of excitement brewing for the event, which begins on Tuesday, April 21 with a meet-and-greet at Pirate Cove Resort and concludes with Saturday night’s awards party at the new poker run headquarters—London Bridge Park.

While the host hotel is still the Nautical Beachfront Resort, London Bridge Park is set to feature a two-day beach party on Friday (the day of the poker run) and Saturday (the day of the top-speed shootout) that is expected to be a highlight of the event this year and an extension of the poker run’s successful Street Party, which takes place on Thursday along McCulloch Blvd.

“The event is coming along nicely,” said Jim Nichols of LakeRacer LLC, the organization behind the poker run that is teaming up with Lake Havasu-based DSM Events to enhance the 2015 event. “Since announcing the addition of ‘Power in the Park,’ things are really starting to come together. We have a lot of vendors buying in and we’ve got some cool things planned.” 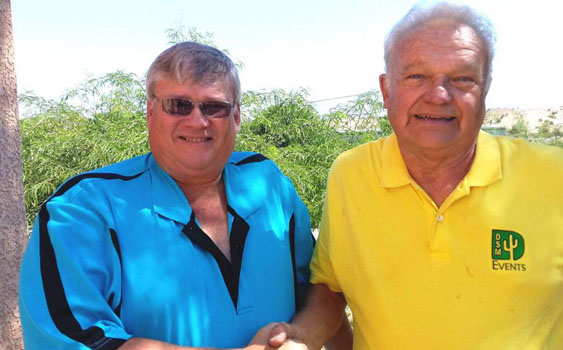 Longtime Desert Storm Poker Run organizer Jim Nichols is thankful to have Jim Russell of DSM Events by his side to produce this year’s event. (Photo courtesy of Jim Nichols.)

“Having Jim Russell and DSM Events involved has worked out extremely well—he has some great local connections and brings a lot of synergy, especially from a logistics side of things,” said Nichols, who is particularly thankful for Russell’s support since he may end up sitting on a jury for a high-profile murder case in Phoenix that starts in February and could last a couple of months. Not only would that affect Nichols’ “real job,” it would surely get in the way of his Desert Storm preparation.

With possible jury duty on the horizon, Nichols made sure to point out some good news, including the registration of two show-stopping boats by Colorado performance boater Win Farnsworth, who calls Lake Havasu his home lake. Farnsworth confirmed that he’s bringing both Silver Lining—his twin Mercury Racing 1350-powered M41 Widebody catamaran from DCB Performance Boats—and Low Altitude—the turbine-powered Mystic Powerboats 50-foot cat he recently purchased—to display at the Street Party and participate in the poker run. 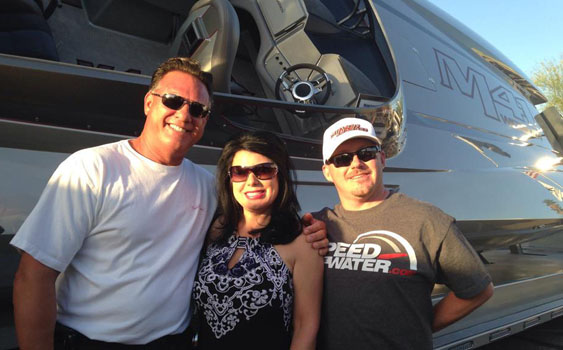 “Why bother to bring two boats?” Farnsworth asked, repeating my question. “My wife [Melissa] keeps asking me the same thing—she feels like it’s excessive, but I love this stuff. Both boats will be on display and we’re planning to run them both in the poker run and the shootout. We’ll use Silver Lining for the Krusin’ For Kids rides. It’s going to be a lot of work with two boats out there, but I think it will be worth it.”

According to Nichols, one of Mystic’s new 4400 catamarans will be at the event as well. Corey Bakken of F650 Supertrucks confirmed that he and owner Chris Walker are planning to display a couple of custom trucks next to the 44-footer with twin Mercury 1100 engines at the Street Party and enter the boat in the poker run. The same boat will make its on-water debut at next month’s Miami Boat Show Poker Run the week following its unveiling at the show.

Also expected to make it to Lake Havasu this year is Rick Bowling’s Gone Again Talon, Michael “Doc” Janssen’s Snowy Mountain Brewery Outerlimits raceboat, Gary Smith’s Predator Skater and a ton of other notable boats from the Midwest to Florida and everywhere in between.

There’s a reason why the Desert Storm Poker Run has been hailed as the kickoff to the boating season in past years—and this year appears to be no different.