When it comes to high-performance boat events, turning 21 isn’t quite the same as hitting the magic number for an adult, but it’s still a remarkable milestone. And that’s exactly how old the Desert Storm Poker Run in Lake Havasu City, Ariz., is going to be when the annual event rolls into town in April this year.

Scheduled for April 24-28, the event is coming off a landmark year in which it celebrated its 20th anniversary, moved to a new host venue and underwent a leadership change that saw the husband-and-wife team of Christina and Jimmy Nichols of Phantom Productions take over the organizational duties from Jimmy’s father, Jim, who ran it for 19 years—it was originally called the HeatWave Poker Run when Nichols and friends started it in 1999 under the Arizona Hot Boat Association.

This year, Christina Nichols said she is expecting much of the same with a few modifications, which is what the event tries to incorporate on an annual basis, as well as some special surprises that she plans to announce in the coming weeks.

“We have some exciting changes happening,” said Nichols, who has been involved with the event, which includes Thursday’s Street Party, Friday’s Poker Run and Saturday’s Shootout, for many years. “We’re going to extend the Street Party about a quarter of a mile south and we’re organizing it a little differently by spreading out the vendors and food trucks to get more participants and sponsors involved.”

Louisiana’s Michael Pierce, who owns the stunning Pure Platinum Skater 388, is returning to the poker run this year, and he’s bringing friends from Louisiana with him—the Branton family who owns VOODOO another Skater 388.

Nichols, who said she has a wait list for the Street Party, expects the Eye of the Storm—a new addition last year—to be even more of a destination along Lake Havasu City’s McCulloch Boulevard.

“We created the Eye of the Storm to make it so the registration area wasn’t just for VIP participants any longer,” she said. “I think it was well received last year, but it’s going to be much improved this time around as the entire area is going to be a beer garden not just one section. All three Predator Skaters are going to be on display as Gary Smith plans to bring his new one to the event. We’re going to have a Battle of the Bands with three bands competing and our title sponsor, Kicker Audio, will have an incredible setup again.

“Kicker is also bringing out the finish-line boat—what they call their ‘boom toon’—for the Shootout on Saturday,” she continued. “We have 25 boats registered so far for the top-speed runs and we’re expecting a bunch more to come show off on the three-quarter-mile course. In fact, I think we’re going to have a good amount of outboard boats running this year. Of course, the DCB representation will be solid as usual.”

According to Nichols, rooms are still available at the London Bridge Resort as of this week—she said Desert Storm booked the entire hotel this year—but that there is a waiting list for dock space at the host location. Nichols seemed excited that a new Holiday Inn recently opened across from the London Bridge Resort as it provides some affordable overflow accommodations for people visiting for the extended weekend. 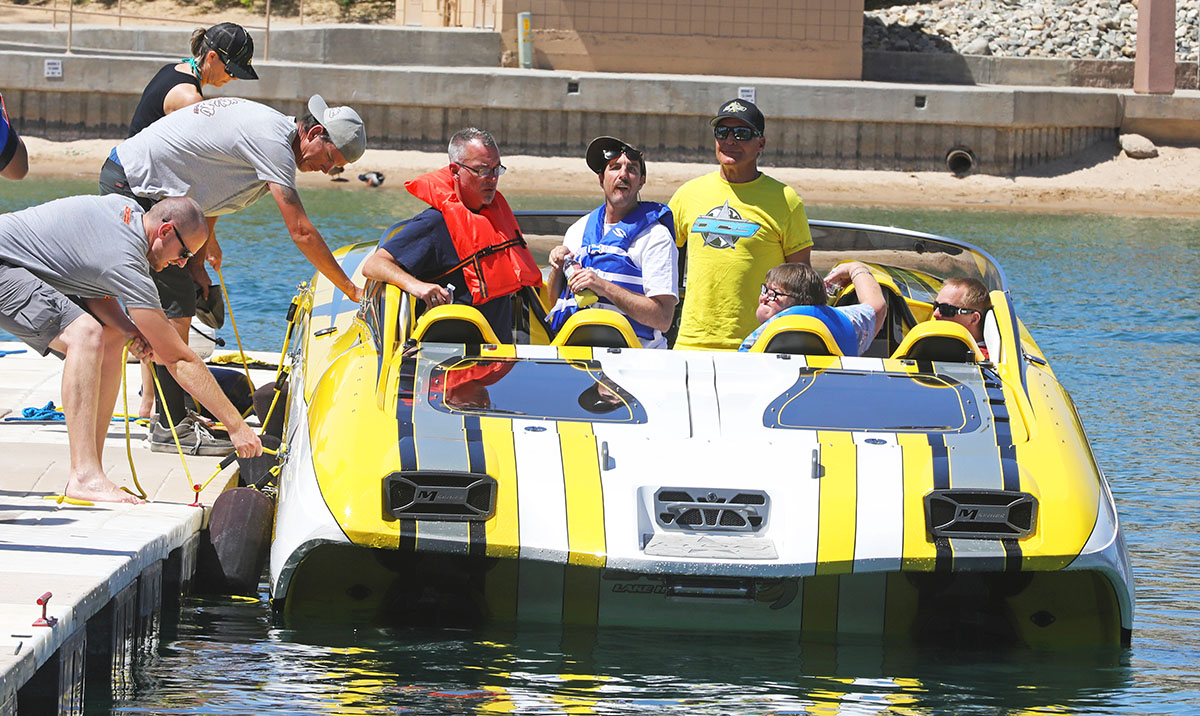 Generous DCB owner Dave Megugorac is going to be at the Desert Storm Poker Run again, but he’ll have Bananas XL, his new M44 catamaran powered by twin Mercury Racing 1550/1350 engines, this time around.

While remembering to remind potential participants that online registration closes on April 12, Nichols said that anyone who wants to sign up for the annual Krusin’ for a Kause (formerly Krusin’ for Kids) on Wednesday, should do so soon.

“We decided to change the name of the charity ride day to reflect the fact that it’s not just open to kids with disabilities and their families,” she said. “We’ve been doing this so long that some of the kids are adults now. Plus we’ve grown to include various organizations that assist adults with disabilities as well.”

With all the changes from last year under her belt, Nichols is confident the upcoming modifications will continue to enhance the Desert Storm Poker Run.

“We like to keep the excitement coming while catering to the participants, the sponsors and the spectators,” she said. “Of course, safety is our No. 1 priority, but we also want people to have a good time.”