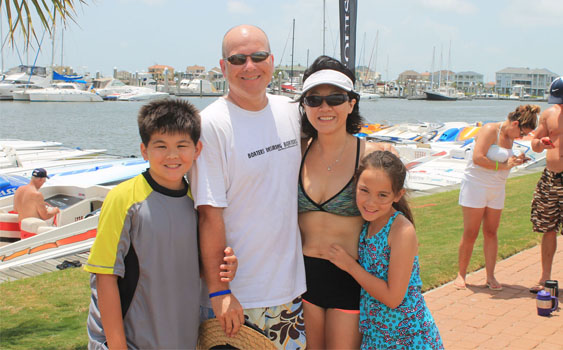 For Devin, Julie, Leilani and Lukas Wozencraft, the Texas Outlaw Challenge was a family affair — and the road-trip adventure of a lifetime.

Cram the family in the car, take to the open road and see what happens. That’s the basic premise of any good family road-trip vacation, right? Heck, the potential for fun, hijinks and good old disaster-based-hilarity is so ripe that it spawned a series of National Lampoon movies featuring the Griswolds, that lovably dysfunctional family from Chicago. England, Paris, Rome and even a mythical California theme park called Wally World, wherever the Griswolds went, trouble followed. And their troubles were our pleasure.

Devin Wozencraft, the owner of Wozencraft Insurance based in Southern California, probably couldn’t help feeling a little like Clark Griswold when the cooling fan for the radiator in his Ford Expedition sport utility vehicle quit Sunday afternoon a few hours after he began the long journey home — with his family and new 29-foot E-Ticket custom deckboat in tow — from last weekend’s Texas Outlaw Challenge Poker Run. He’d hauled the 10,000-pound, 29-footer powered by twin 710-hp Ilmor engines almost 1,500 miles to get there, and he spent more than two hours putting the shrink-wrap back on the boat before pulling out of the Houston area. He was eager to put some miles between the back end of his trailer and Galveston Bay.

“I called a friend at a Ford dealership who diagnosed it for me,” said Wozencraft. “We decided to drive through the night to keep the engine from overheating. When we got to Phoenix we had it fixed — it took about two hours.”

But unlike the endless series of pratfalls that befell the Griswolds throughout those silly movies, that was the only bummer that the Wozencraft family, which includes Devin’s wife, Julie, and their 10-year old children Leilani and Lukas, had to endure during their road trip to Texas. For the Wozencrafts, who had only run their new boat twice — during Memorial Day Weekend on Arizona’s Lake Havasu — the trip was “a blast.”

They arrived in the Houston area last Thursday and immediately launched their boat on Clear Lake. Most Texas Outlaw Challenge participants were just getting into town as well, so the Wozencrafts had the day to spend together.

“It was a family day,” said Devin. “The kids got to jump off the boat and into the water all day. After they got off the boat, I went out and ran the E-Ticket a little harder, but I only took it up to 100 mph. It ran great.” 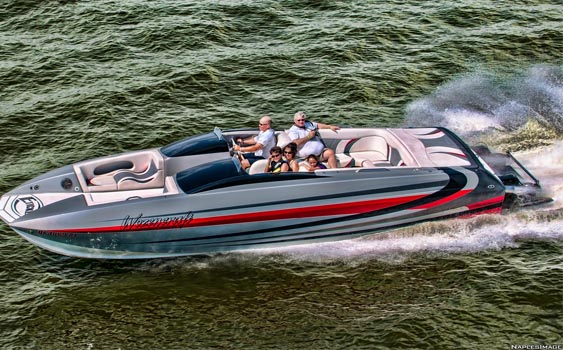 The following day featured the annual pool party at the home of Kenny Armstrong, a local performance-boat owner who is well known in the go-fast world thanks his gregarious spirit and spectacular 48-foot Phantom of the Opera-themed Marine Technology, Inc., catamaran. Armstrong’s annual shindig is many things, but “kid friendly” isn’t one of them so Julie Wozencraft took Leilani and Lukas to the Johnson Space Center while Devin took his new E-Ticket baby to the pool party.

The poker run required no such family separation. In fact, an extended family member — Jim Nichols of Lake Racer LLC/Desert Storm fame — joined the Wozencrafts the following day. The boat’s open deck design proved useful at card stops, where volunteers punched a laminated ticket that each boat had to carry. Not commonly seen east of Lake Havasu, much less in the waters of Galveston Bay, the deckboat layout raised local eyebrows.

“People had never seen anything like it,” said Wozencraft. “They couldn’t stop asking me about it.

“I think the coolest thing about the run, though, was running in the Galveston Bay shipping channel with the tankers and cruise ships,” he continued. “The family had a blast. The kids loved running to the front of the boat to get the card punched at each stop. The other high for us was that (Texas Outlaw Challenge organizer) Paul Robinson arranged docking for us in the Kemah Marina, so it was like a two-block walk from our hotel.”

By the time you read this, the Wozencrafts will be home. They will have dropped off their deckboat at E-Ticket in Lake Havasu City — where it lives in the company’s showroom so prospective customers can take a look at it. They will have run the boat for a couple of hours on the lake to rid it of the less-than-pristine residue from Galveston Bay.

Next up for Devin Wozencraft this season? The Big Cat Poker Run in August on the Sacramento River Delta, about 500 miles north of his home. That’s a “milk run” next to his family’s recently finished Texas road trip, so it should be a whole lot easier in terms of travel time.

But it will have to go a long way to be as much fun.