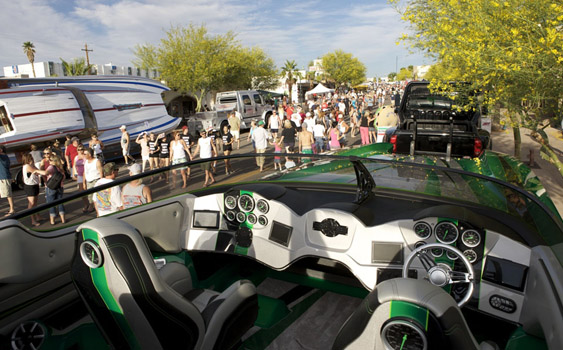 The Street Party the day before the poker run is a major highlight of the Desert Storm Poker Run. (Photo by Robert Brown.)

The last time Dean Loucks, founder of The Art of Design (TAOD) in Elkhart, Ind., was at the Desert Storm Poker Run in Lake Havasu City, Ariz., was two years ago and you couldn’t wipe the smile off his face thanks to a flight over the lake with Lake Havasu’s Water Jetpack Adventure.

Loucks will be in Lake Havasu again next week for the annual poker run, which includes the Krusin’ for Kids boat rides on Wednesday, the Street Party on Thursday, Friday’s poker run and the shootout on Saturday. He’ll be coming to Arizona straight from his first visit to Austin, Texas, for the Bus ’N Bikers “Keepin It Weird In Austin” Rally. He and Nancy Chupp are traveling in his luxury Liberty Coach, which was painted by TAOD and featured on the Travel Channel. Altogether the RV and accompanying trailer for a Ferrari, motorcycle and more stretches more than 76 feet long.

At both events, Loucks is showcasing an assortment of fine art—paintings, copper works and his new, more economical prints—from the Dean’s Place Art Gallery collection as well as examples of the boats, motorcycles, RVs, helicopters and more that he and the talented crew at TAOD have created over the past 25 years. 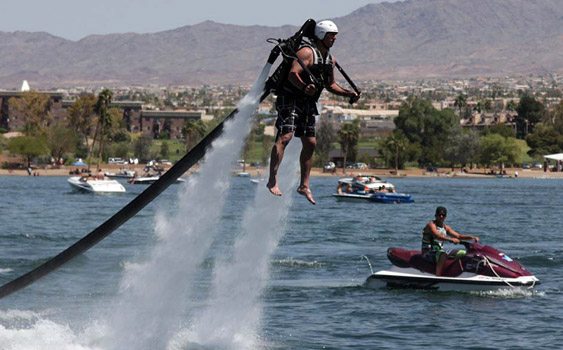 Two years ago Dean Loucks took a flight over Arizona’s Lake Havasu that he’ll never forget. (Photo courtesy of The Art of Design.)

“It’s kind of like flying a helicopter with the entire checklist of things you have to get ready to haul this coach down the road,” said Loucks, who is currently working on the paint job for Bill Pyburn’s new 38-foot Skater Powerboats catamaran and its tow vehicle. “We’ve got more than 5,000 pounds of paintings and prints with us. I know people in Havasu are going to ask me if we still paint boats—the answer is yes. I get that a lot now because of the art studio we opened and the attention we’ve received on the RV side.

“The fact is that our boats are works of art not just paint jobs,” added Loucks, who also has a line of hand-painted Kitchen-Aid mixers, including officially licensed Notre Dame editions. “We’re pretty exclusive now; we paint about seven boats a year (at one time TAOD painted 30-plus boats a year) so we can be more selective and not worry about trying to hammer boats out to get them out the door. All of the other stuff we do improves the boats we paint. For example, if you do something small like a Kitchen-Aid mixer, you get into such fine detail that taking that detail to a larger scale becomes easier. I feel like if you do enough different things you learn so much more that way.”

Along with checking out his latest artwork, I can’t wait to catch up with Loucks, who will leave Arizona and head home to prepare for the shop’s annual Art in Motion event (May 17), which is sponsored by the Michiana Porsche Club and features the opportunity for anyone to run timed autocross laps at Tire Rack in South Bend. Afterward, everyone heads to Dean’s Place for a car show and free food and drink that afternoon. 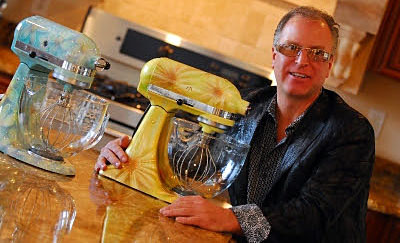 Loucks proudly displays a couple of his hand-painted Kitchen-Aid mixers. (Photo courtesy The Art of Design.)

Reconnecting with folks like Loucks is probably my favorite part about Desert Storm, and this year should be no different. At the Street Party alone I’m sure I’ll see Jeff Johnston of Hering Propellers, the Nordic Boats crew, Bob Sepulveda from Advantage Boats and the entire Teague Custom Marine family.

I’m also looking forward to visiting with the guys from Dave’s Custom Boats, which will have both of the company’s M41 Widebody models in town for the party and poker run. According to DCB’s Tony Chiaramonte, last weekend’s Lake Havasu Boat Show was a success leading to a couple of boat sales. Chiaramonte added that DCB will have many customers in town for the event, including a couple with new M35 Widebody catamarans powered by twin Mercury Racing 1100 engines.

Between the eye candy on display in the Street Party and in the poker run to the event’s first AquaPalooza-style, raft-up concert event on Friday afternoon in front of the Nautical Beachfront Resort in Thompson Bay, I’m anxious for another year of the Desert Storm Poker Run.