You are at:Home»Poker Runs»Poppin’ The Limits At Lake Cumberland Poker Run 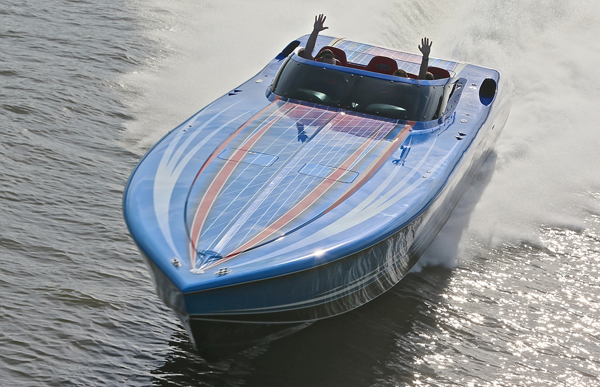 In what could be its final event of the 2017 boating season, Poppin’ The Limits is heading to this weekend’s Lake Cumberland Poker Run. Photos by Pete Boden/Shoot 2 Thrill Pix.

On Friday afternoon during the Lake of the Ozarks Shootout weekend in Central Missouri, the Outerlimits Offshore Powerboats clan, led by company principal Joe Sgro and key team member Dan Kleitz, held an owners’ rendezvous party at the waterfront home of longtime Outerlimits owner Mike “Doc” Janssen. The custom high-performance V-bottom and catamaran hardware that filled Janssen’s docks was as good as it gets, but for some reason one of the boats—a big blue V-bottom I couldn’t immediately identify—caught my eye. So I asked Vinnie Diorio, the owner of a beautiful 2016 Outerlimits SV 43 sportboat about it.

“That belongs to ‘Popcorn’,” he said. “Follow me. I’ll introduce you to him.”

Within a few minutes, I was chatting to 32-year-old Evan Singer of South Lyon, Mich., about 30 minutes outside of Detroit, about his sit-down 2009 Outerlimits 44 GTX, one of two models built before the company transitioned to its SV series of sit-down V-bottoms. Singer purchased the 44-footer in the winter of 2016 from veteran Outerlimits owner Glenn Salyer, who runs a successful highway construction business and owns the Lake Cumberland Marine in Kentucky.

“What I liked about it when I first saw it was that it didn’t look dated—the interior looked just like what Outerlimits is doing today with the SV models,” said Singer, who owns Detroit Popcorn, a concessions company that operates in everything from service stations to sports stadiums. “It has a carbon deck, a full wraparound windshield and suspension seats.”

In a nod to his business, Singer called the boat, which is powered by twin Mercury Racing 1075 SCi engines with 50 hours on them since the previous owner had them refreshed, Poppin’ The Limits. In another nod to his business, his Outerlimits friends nicknamed him “Popcorn.” 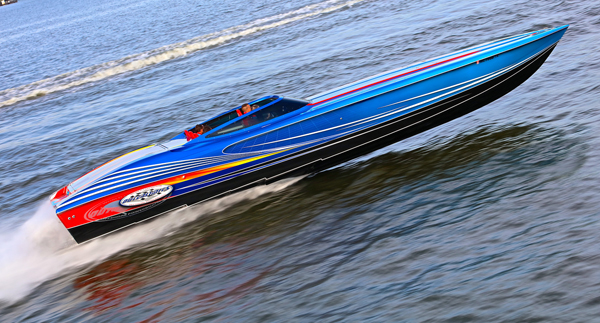 While the 44 GTX is his first sit-down V-bottom, it’s not his first performance boat. A little more than six years ago, he entered the go-fast V-bottom world in a Baja 342. From there he stepped up to a Nor-Tech 39 Super Vee, which he ran for three seasons.

“But all of my friends had Outerlimits so I had to have one, too,” he said. “So I bought the 44 GTX and made it pretty again,” he said. “It looked good. I just re-cleared the deck and hull-sides and painted the bottom black, put in new carpet and upgraded the stereo system.

“I’ll never go back to a stand-up boat,” he continued. “After I rode in Vinnie’s boat—I had just sold my Nor-Tech—I came home and told my wife, Danielle, who goes on the all the events with me, ‘We’re buying a sit-down boat.’ There’s just no comparison.”

The Singers had a busy season this year. They campaigned Poppin’ The Limits, which reportedly reached 135 mph at the Outerlimits facility in Bristol, R.I. when it was built—and Evan Singer has run in the mid-120-mph range since he bought it—in the Four Horsemen Poker Run in Wisconsin, the Boyne Thunder Poker Run in Michigan, the LEOPA Thunderfest Poker Run in Ohio and the aforementioned Lake of the Ozarks Shootout (he did not compete in the top-speed contest).

And now they’re off to this weekend’s Lake Cumberland Poker Run—thanks to Salyer, the boat, truck and trailer are already there. All they have to do is fly to Lexington, Ky.

“I did Cumberland last year,” he said. “I have my own houseboat this year. A lot Outerlimits owners will be there. Vinnie is going. And Dave Scotto is bringing his own entourage.The Sandman Outerlimits crew is going to be there, Burton Kirsten is bringing his cat. We’re going to have a great group.”