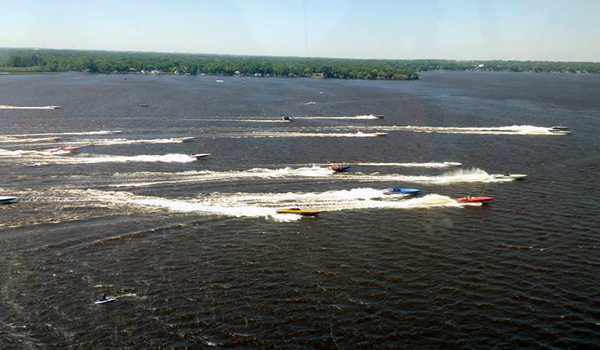 What separates a “busman’s holiday,” loosely defined as a vacation involving something you do for work, and a work trip is intent. If you head out intending to work, even if you have a good time while you’re there, it’s a work trip. If you head out intending to have a good time, even if you have to work a little while you’re there, it’s a busman’s holiday.

For Ed Champion of Big Thunder Marine in Gravois Mills, Mo., and Anthony Scioli of Elite Poker Runs LLC in Buffalo, N.Y., their journeys to last weekend’s Four Horsemen Poker Run on Lake Winnebago in Osh Kosh, Wisc., were most definitely the latter. They came for a good time and—while getting to the event and Saturday’s rough water conditions made it a little work—found one.

For Champion and his wife, Kathy, the trip involved a 10-hour drive north from their home in the Lake of the Ozarks area in Central Missouri. That they were hauling a 2009 Fountain 38’ Lightning powered by twin Mercury Racing 700 SCi engines made it that much more of an adventure. (Though Champion recently purchased the 38-footer, it currently is for sale at Big Thunder Marine.)

“The water at Lake Winnebago was angry,” Champion said, then chuckled. “I was shocked. We used all 38 feet of that boat. There’s a pretty surprising contingent of Fountains and Outerlimits up there. I think Scott Sjogren and Ship Yard Marine must have done a good job with those lines in the area.

“Shannon (Radtke), the woman who put on the run, did a great job, she really did,” he continued. “I know firsthand what organizing a poker run is like and it’s not easy. She knew everyone’s name. You walk in there and you feel like you’re at home. And the venue is great. The hotel where you stay is across the river from where everything happens. Everything is in walking distance.” 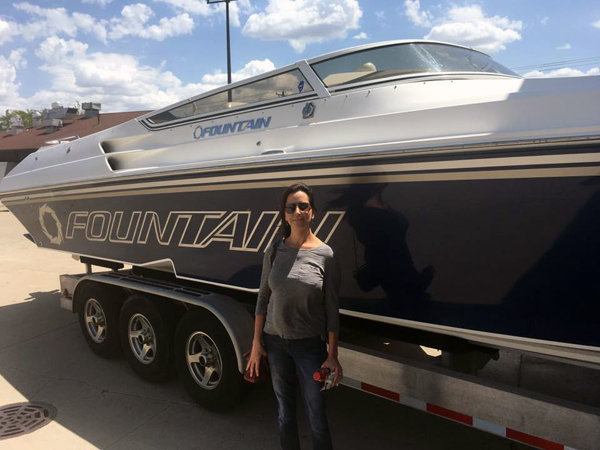 Kathy Champion joined her husband, Ed, of Big Thunder Marine to haul this 38-foot Fountain sportboat for 10 hours to make it to the event.

But for the Champions, just getting there was more than half of the fun. “We hadn’t been in a car together for 10 hours for 10 years,” said Ed. “We had some free time and we just went together—we didn’t bring anyone else from the business. It was great.”

“It was a really, really good time,” he said. “It was nice being in Dave’s Outerlimits because the water was rough—there like three- to four-footers out there—and it was windy. Some of the smaller boats never left the docks and made it to the lunch stop. But Jason (Lindeman) and his guys at Sweet Water Performance Center-Marina and the Dockside Tavern, and the event organizer, went out of their way to make it great. They showed us all a good time and were super-grateful that everybody showed up. I would go back, for sure.

“It was a fantastic group of people, and that’s what it’s all about,” he continued. “We were all talking about that after the run, and my Erie Poker Run even came up a couple of times. Even if the water is rough, it’s still a great time if you have a great group. I hung out with some of the ‘usual suspects,’ people I already know, but made a few new friends, too.”

Of course, Champion and Scioli are back at their respective workplaces—Scioli tying up the few remaining loose ends for the upcoming Erie Poker Run this month, Champion working out the final details of a new business deal—the specifics of which will be announced soon—for Big Thunder Marine. But both enjoyed their busman’s holidays last weekend, and vow to embark on more in the near future.