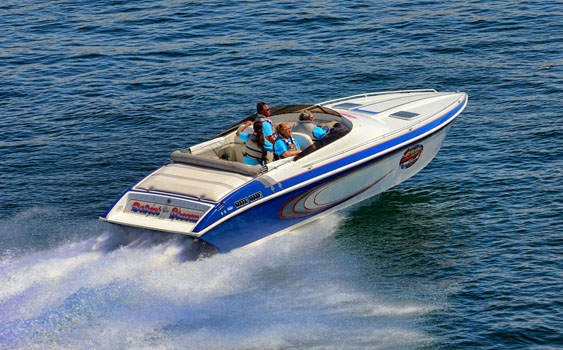 Although he doesn’t get much time on the water during the Desert Storm Poker Run, LakeRacer President Jim Nichols managed to get a couple of helicopter shots taken of his 1996 Warlock 32 Euro last year. (Photo by Jay Nichols.)

While conducting interviews on Monday for an upcoming magazine feature, I reached out to a couple of influential promoters of poker runs—Jim Nichols and Paul Robinson. Nichols is the president of LakeRacer LLC, the organization behind the Desert Storm Poker Run and Monster Bash Poker Run in Lake Havasu City, Ariz., and Robinson heads up the efforts behind the Texas Outlaw Challenge in Seabrook, just outside of Houston.

For both Nichols and Robinson, these popular events are practically full-time jobs on top of their “real” full-time jobs. And somehow they’re always quick to get back with participants, sponsors and even media types like me. After talking with each of them about their plans for 2014—some on the record, some off—the enthusiasm I’ve shown in two of my last five columns (see My 2014 Event Wish List and A Positive Outlook) toward the impending boating season and beyond is even greater.

Starting with the Desert Storm Poker Run (April 23-27), Nichols said there are going to be a few new wrinkles to the event, which features “Krusin for Kids” rides on Wednesday, a mind-blowing street party on Thursday, the poker run on Friday and a top-speed shootout on Saturday.

He informed me that the poker run and accompanying helicopter images will now conclude at 2:30 p.m. with the rest of the afternoon and evening set aside for a new waterfront concert and beach party at the Nautical Beachfront Resort followed by a VIP party to collect poker hands. Nichols and company have a few other ideas for the event, which is presented by Teague Custom Marine, but nothing that’s been set in stone.

Meanwhile, Robinson said the Texas Outlaw Challenge (June 19-22) will be pretty similar to 2013 with a couple of new stop locations and a change to the Saturday evening dinner and awards party. Already hard at work on the seventh annual event, Robinson said rather than bunch everyone into a big tent for dinner, this year they will be handing out Outlaw bucks good for meals at several locations along the Kemah Boardwalk. Following dinner, the poker hands and Outlaw Calcutta Auction winners will be determined near the boardwalk’s main stage and dancing fountain.

Robinson also confirmed that the event will return to Kenny Armstrong’s house for its premier card stop on Friday following the Outlaw 100+ MPH Club Shootout top-speed runs on a designated safety-patrolled course. To satisfy the non-boaters in the community, which reported an economic impact of more than $900,000 from the 2013 event, Robinson concludes the weekend with Sunday’s Horsepower Car Show and the accompanying Miss Horsepower Bikini Contest.

A confident Robinson expects to have more than 200 boats signed up for this year’s run. Nichols is anticipating participation growth but nothing substantial. No matter what, both events are sure to be over the top and a memorable time for all involved.