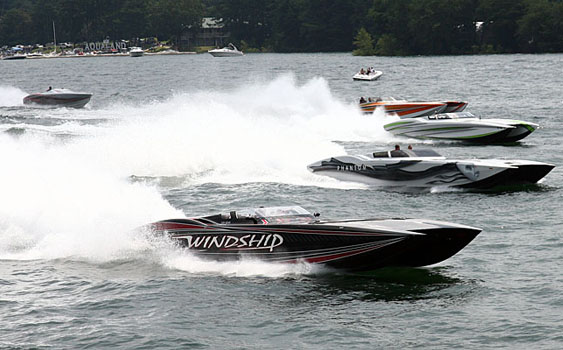 John Woodruff, shown driving his 48-foot MTI Windship at last year’s Pirates of Lanier Poker Run, is expecting to raise even more money for charity at this year’s event. Photo by Jeff Gerardi/FreezeFrameVideo.net.

Based on this year’s poker run season, which is only just beginning, the question I asked in last year’s column—Are Poker Runs a Thing of the Past?—has been answered. Not even close.

In the past week alone, my fellow OSO columnist and partner at speedonthewater.com Matt Trulio and I have reported on several poker runs. There were wrap-ups from two safe, fun and successful runs—the Smith Mountain Lake Poker in Virginia and the Long Island Stampede Poker Run in New York hosted by the National Power Boat Association.

There was news to report on the sell-out front as well. Organizers of the Boyne Thunder Poker Run, the 11th annual event on Lake Charlevoix and Lake Michigan slated for July 11-12 in Boyne City, Mich., and the Western New York Offshore Powerboat Association’s Buffalo Poker Run, which takes place August 8-9, have started waiting lists as their 100-boat limits have been met.

Scheduled for the first weekend in August, the Buffalo Poker Run in New York has already sold out. Photo by Tim Sharkey/Sharkey-Images.com.

According to reports from the guys behind the seventh annual Texas Outlaw Challenge coming up June 19-22 in Clear Lake, and the sixth annual Pirates of Lanier Poker Run on Georgia’s Lake Lanier in mid-July, the events are going to be bigger and better, which is hard to imagine. In fact, John Woodruff, who owns the 48-foot Marine Technology Inc. catamaran Windship and is on the Lanier Partners of North Georgia board of directors, said the event is hoping to register more than 300 boats and raise $400,000 for local charities. That sounds unbelievable, but I wouldn’t put it past Woodruff and the zealous company around him.

None of this good news surprises me really as the organizers and communities behind these events are dedicated, welcoming and, most importantly, aware of the economic impact poker runs can produce. Consider that on back-to-back weekends in late April and early May thousands of people flocked to Lake Havasu City, Ariz., and Springfield, La.—not the most sought-after vacation destinations—to participate in two “bucket list” events for many performance boaters—the Desert Storm Poker Run on Lake Havasu and the Tickfaw 200 Poker Run near New Orleans. 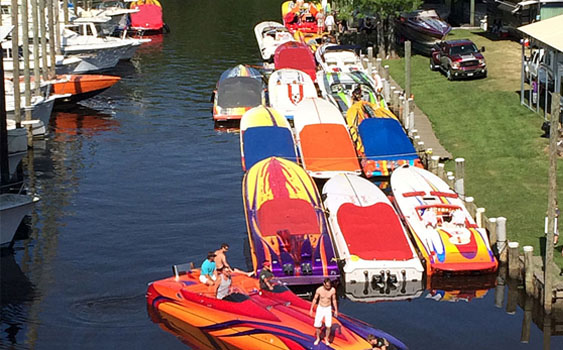 Based on reports from the 27th annual Tickfaw 200 Poker Run at Blood River Landing in Springfield, La., it was the best one yet. Photo by Casey Harrison.

I could go on and on. There’s the New Jersey Performance Powerboat Club’s Atlantic City Festival of Speed and the hopeful revival of the Jacksonville Poker Run—both next month. Of course, along with August’s Lake of the Ozarks Shootout, there are a couple of more cool runs in June on Missouri’s Lake of the Ozarks—the fun run coordinated with the second annual Lake Race and the seventh annual Support Our Troops Poker Run.

Finally, I’d be remiss if I didn’t include news on the first Brad Smith Memorial Poker Run coming up next month. Of course it’s a reminder of an unfortunate event, but it’s also a way to keep a couple of enthusiastic poker runners’ spirits alive and, better yet, raise money for the Brad Smith Memorial Children’s Fund. Hosted and organized by Ugly John’s at Thunder Bay Marina on Grand Lake in Ketchum, Okla., the poker run is scheduled for June 13-14.

I didn’t set out to feel this way, but boy do I feel stupid for even asking if poker runs were a thing of the past?