You are at:Home»Poker Runs»Texas Outlaw Challenge Shooting for Record Year 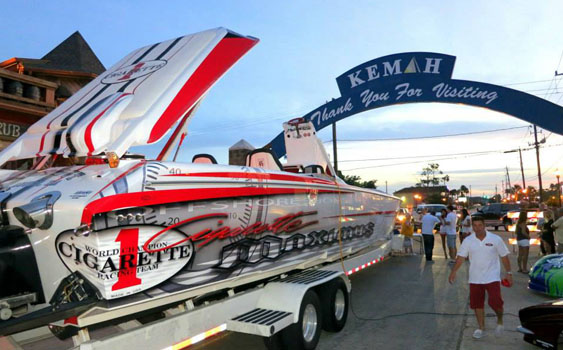 The Texas Outlaw Challenge receives exclusive access to the popular Kemah Boardwalk and this year that access is going being extended over three nights. (Photo courtesy of Yvonne Aleman.)

With even more support from the local community, clubs and volunteer organizations than ever before, Paul Robinson, the founder and lead organizer of the Texas Outlaw Challenge, believes the eighth annual event is going to be the biggest and best one to hit Texas’ Clear Lake communities.

For starters, the Texas Outlaw Challenge, which is scheduled for June 18-21 (with a party at Sam’s Boat for early-arriving guests on Wednesday), is gaining unprecedented access to the popular Kemah Boardwalk, the entertainment destination that has hosted the event’s Stampede Street Party the past couple of years.

“As you are well aware,” Robinson said to me, as I’ve covered the Texas Outlaw Challenge in some capacity for a magazine or online since he started it, “we’re always looking to expand the event in some way. This year our growth has a lot to do with the city of Kemah inviting us back and allowing us to shut down the streets at the Boardwalk on Thursday, Friday and Saturday nights. The city doesn’t shut down the streets any other time of year, which says a lot about the Texas Outlaw Challenge, the clientele we bring in and the amount of money we’re contributing to the community.

“We have our Stampede Street Welcome Party on Thursday night, which we’re expanding by shutting down two streets to display even more boats,” he continued. “The quick-draw shootout we brought in for one night last year with one of the country’s top sharpshooters was a hit so we’re offering the chance to challenge him each night with all of the donations going to charity. We’ll also have some hot rods joining the Stampede Street Party on Friday and Saturday. On Friday night we’ll have the Super Car Showdown featuring exotic cars from the Ferrari, Lamborghini and Porsche clubs in Houston. On Saturday night we’ll have the Horsepower Car Show featuring a special horsepower challenge between the local Mustang and Corvette clubs. We’re expecting quite a show this year.” 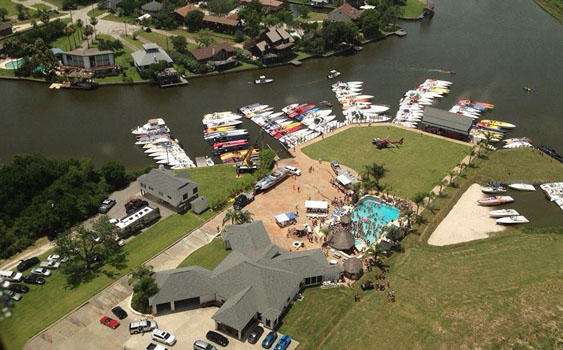 Once again Kenny’s Casa will host a pool party on Friday that serves as the first stop of the Texas Outlaw Challenge poker run. (Photo courtesy of Jeff Johnston.)

Not to take anything away from Saturday’s poker run and awards ceremonies, but Friday is as jammed as it gets with activities. On the water there’s the GPS Outlaw Shootout top-speed runs before noon, the premier card stop/pool party at local performance-boater Kenny Armstrong’s residence from noon to 4 p.m., and the second card stop at Top Water Grill for dinner. The post-dinner festivities include the street party, a fireworks display at the Kemah Boardwalk, the Miss Outlaw Bikini Contest at Cabo Club and the High Horsepower Dock Party at the Turtle Club in Seabrook.

“If you haven’t been to the high horsepower dock party at the Turtle Club, you need to check it out,” said Robinson, adding that event participants will have access to water taxis to shuttle them across the lake to different happenings. “We bring the boats to the docks and we get some local Pro Mod and Drag Racing Cars in the parking lot and have a shootout, kind of like a stereos war, but with engines. The guy who won it last year, Howard Davis with his 40-foot Motion, blew everyone away. It was incredible.” 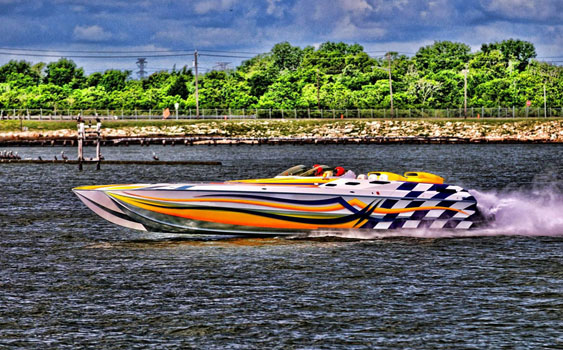 Robinson is anticipating more than 200 registrations for the event this year and he expects strong fleets from many of the top performance boat companies in the country, including DCB Performance Boats, Marine Technology Inc., Nordic Boats, Skater Powerboats and Statement Marine. There may even be a few Mystic Powerboats cats in the fleet, including Chad Collier’s revamped 50-foot open-cockpit model with twin Mercury Racing 1350 engines and Win Farnsworth’s canopied 50-footer with twin T-53 turbines.

Even with all that, the best news just might be a secret.

“Kenny [Armstrong, who owns the 48 MTI Phantom] took me aside at the Miami Boat Show and said, ‘Paul. I’ve got a surprise in store for this year’s pool party and I’m not even going to tell you what it is,’” Robinson said. “Knowing Kenny and what he is capable of, I’m guessing it’ll be a pretty big deal.”